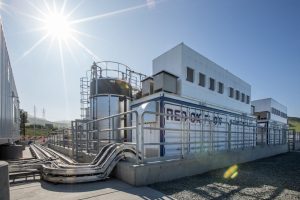 CCCE, one of the US state community options aggregator (CCA) energy provider groups, said it selected the projects in response to a request for proposals (RfP) it issued in June. In total, 21 proposals were submitted from 16 developers and two more energy storage projects are still being considered alongside the four announced.

In what could be the largest utility acquisition of the technology so far in the world, vanadium redox flow battery (VRFB) systems with a storage life of eight hours will be built ranging in size from 6MW / 18MWh to 16MW / 128MWh, along with four-hour lithium-ion battery system. CCCE gave an estimated date of 2026 for all approved projects to be operational.

The largest VRFB project in California to date is believed to be the 2MW / 8MWh system inaugurated in 2017 in the service area of ​​the San Diego Gas & Electric (SDG & E) utility in a government-backed project. of the state, as well as by the state of Japan New Energy and Industrial Technology Development Organization (NEDO).

“Long-term energy storage plays an integral role in all of this. Central Coast Community Energy is proud to innovate with emerging technologies within our service area. “

Community choice aggregators give consumers the option to select what sources their energy comes from. Many are opting for green power, and according to the California Community Choice Association, long-term contracts for 2,645.4MW / 9,237.6MWh of energy storage have been signed by CCA in the state earlier this month.

In July, Central Coast Community Energy signed contracts for 778MW of renewable generation and 118.75MW of energy storage in a joint acquisition with Silicon Valley Energy, another of the CCAs.

As noted in yesterday’s report on Energy-Storage.news On a proposed 400MW / 3200MWh advanced compressed air energy storage project in California by Hydrostor, the state’s regulatory Public Utilities Commission has moved to acquire 1,000MW of long-term energy storage by 2028.

This is believed to be the first competitive long-term storage acquisition planned in the US Meanwhile, a group of CCA, not including CCCE, is requesting 500MW of long-term storage. The call, issued in October 2020, is already closed and a decision is pending.

With California’s combination of a 2045 carbon-free electricity target and grid power shortages, particularly during peak summer periods, the state’s need for energy storage is acute. State Governor Gavin Newsom moved earlier this year to accelerate development of the energy storage project, along with renewable energy.

Newsom has also proposed to earmark hundreds of millions of dollars in financial support for long-term energy storage development in California. A report from consultancy Strategen earlier this year said California could need 55 GW of long-term storage by 2045 to achieve its decarbonization goals while making the electricity supply robust and reliable.

Another report, released this week by the recently formed Long-Term Energy Storage Council (LDES Council), stated that up to 140 TWh of long-term energy storage may be needed worldwide by 2040 to limit the worst impacts of the climate change.