Alevo, the Energy Storage Provider, has recently introduced the GB50TM, a standalone 50KWh/100KW enclosed rack battery energy storage system (ESS) designed specifically for behind-the-meter commercial and industrial markets. The GB50 uses the same patented, non-flammable inorganic electrolyte as the Alevo GridBankTM, ensuring that it delivers the same high performance and reliability as its larger counterpart. Essentially providing the equivalent energy and power of a single rack in Alevo’s flagship 1MWh/2MW GridBank, the GB50 can be deployed as a standalone ESS or strung together in any increments up to a full-sized 1MWh/2MW GridBank. Its use of AlevolyteTM, Alevo’s patented inorganic electrolyte, makes it the world’s premier, safety-first system for installation into existing structures supporting commercial and industrial applications.

Since its unveiling in late 2014, the Alevo GridBank has become one of the most in-demand energy storage systems on the market. Its use of a breakthrough inorganic electrolyte means the batteries offer unparalleled safety, high power and extreme long life, making the GridBank ideally suited to providing multiple services to the grid to facilitate higher rates of energy efficiency, as well as a more efficient use of capital already invested in the grid infrastructure. The introduction of a mini-GridBank, the GB50, extends Alevo’s ability to provide industry-leading battery technology to an even broader market. “The GB50 delivers the same high performance, reliable, safety-first energy storage capabilities as our flagship GridBanks, the only difference being that it’s smaller,” explained Per Dybwad, CEO, Alevo. “We see huge potential for the GB50 to be used as a standalone system for behind-the-meter commercial and industrial applications, or stacked to scale to fit any energy storage requirement.” 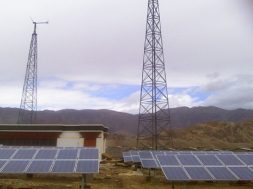