Recent advances in the development of fuel-cell vehicles have also led to rising interest in the industrial production of hydrogen fuel. Some of the mainstream production processes for hydrogen fuel are currently based on electrolysis of water or chemical solutions. Conversion efficiency has been the main focus for hydrogen suppliers, but the cost and accessibility of raw materials are also key factors when considering the commercial viability of a particular process.

This June, a team of researchers at the Australian National University (ANU) announced that it has developed a photoelectrochemical (PEC) cell that directly converts sunlight into hydrogen. Although similar devices have been presented by other companies and research institutions, the ANU team claims that its cell design has achieved a record-high efficiency rate of 17.6%. The structure of this cell is arranged as a perovskite photovoltaic cell in tandem with a silicon-based photoelectrode. The material cost of the device is therefore relatively low. The ANU team released the details of its PEC cell via an article in the journal Advanced Energy Materials.

Quite a few countries including Japan and South Korea have set their sights on establishing a “hydrogen economy” in the near future because hydrogen fuel is not only a clean source of energy but also highly versatile. The material properties of hydrogen allows it to be compressed, stored, and transported like natural gas. Hence, hydrogen fuel can be used in thermal power plants, small generators, and fuel-cell vehicles. Indeed, hydrogen fuel cells could become a preferable alternative to lithium-ion batteries in the development of zero-carbon transportation because they can be “refilled” like gasoline tanks.

Besides having a huge potential in different application areas, hydrogen fuel can play a major role in the growth of the green energy sector. Specifically, the electrolysis process for hydrogen production can be powered by electricity from solar panels and wind turbines. The integration of renewable energies into hydrogen production can thus make hydrogen fuel both clean and sustainable.

Nevertheless, the current methods of manufacturing hydrogen at the industrial scale are rather environment-unfriendly because suppliers have to take account of the conversion efficiency rate and the operating costs. The cheapest method is the steam reforming of natural gas, but it is also the most polluting in terms of emissions. In order to make hydrogen fuel a part of their energy transition plans, countries around the world are now looking at ways to use renewable energies to mass produce hydrogen gas in the most cost-efficient manner.

Finding green methods for hydrogen production is on the agendas of many energy companies and research institutions as well. Among the various hydrogen manufacturing technologies that are under development, photoelectrolysis appears to have a strong prospect of success. This process is the splitting of water into hydrogen and oxygen with the help of photocatalysts or photoelectrodes. A major advantage of photoelectrolysis is that it directly uses sunlight to make hydrogen and does not require an external source of electricity supply. Furthermore, technological advances have raised the conversion efficiency rate of the process to around 19%, which is near the ultimate target of 25% set by the US Department of Energy. However, the high costs of semiconductor materials for PEC cells are a significant entry barrier to the general development of the photoelectrolysis process. 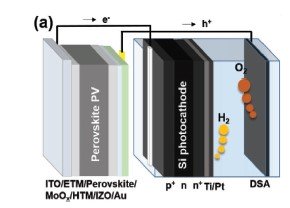 In this regard, the latest breakthrough achieved by the ANU team could be a crucial turning point. The team discovered that layering a perovskite photovoltaic cell on top of a silicon-based photoelectrode can raise the efficiency of solar-to-hydrogen conversion to a level that is higher than what is possible for other semiconductor materials.

Dr. Siva Karuturi, who works at ANU’s College of Engineering and Computer Sciences and led this research project, said that while photovoltaic cells made of crystalline silicon are the mainstream technology in the solar market, they are unsuitable for water splitting because they provide only around a third of the voltage that is needed for the process. On the other hand, a semiconductor material with double the bandgap of silicon can produce sufficient voltage but has less ability to capture sunlight compared with silicon.

The perovskite-plus-silicon configuration devised by the ANU team is based on the premise that two semiconductor materials with smaller bandgaps working together can capture sunlight efficiently and produce the required voltage for photoelectrolysis at the same time. The design is also affordable and can reach conversion efficiency rates surpassing the 10% mark. The laboratory tests conducted by the ANU team demonstrated that the combination of perovskite photovoltaic cell with a photoelectrode made of silicon, titanium, and platinum can reach a solar-to-hydrogen conversion efficiency rate of 17.6%, which is a new record for this kind of device.

Going forward, the ANU team intends to further raise the efficiency of its PEC cell by optimizing the individual components. The team also wants to reduce the cost of the device by replacing the expensive catalytic metals with more obtainable and cheaper alternatives.

ANU has recently made considerable progress in the R&D of tandem photovoltaic cells that comprise a perovskite layer stacked on top of a silicon base. Earlier this year, another research team at the university revealed a tandem cell with a solar-to-electricity conversion rate of 27.7%. As for the follow-up research to the solar-to-hydrogen cell developed by Dr. Karuturi’s team, the goal is to bring down the cost of photoelectrolysis to US$2 per kilogram of hydrogen so that this renewable technology can become competitive with natural gas. Speaking to the media outlet RenewEconomy, Dr. Karuturi said that PEC cells offer considerable cost benefits compared with other processes for hydrogen production since they do not require external power equipment or infrastructure.

0
0   0
previous Driving CO2 emissions to zero (and beyond) with carbon capture, use, and storage
next Building a 100 Percent Clean Economy: Opportunities for an Equitable, Low-Carbon Recovery