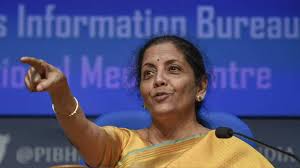 This will be applicable for NPAs (non-performing assets) after March 25. This was one of the proposals Finance Minister Nirmala Sitharaman had announced in her series of press conferences on the Rs 20 lakh crore economic package.

The Union Cabinet has cleared the proposal to suspend Insolvency and Bankruptcy Code (IBC) proceedings for bank defaulters for six months with a provision to extend the period for up to one year, CNBC-TV18 said in a news flash.

This will be applicable for NPAs (non-performing assets) after March 25. This was one of the proposals Finance Minister Nirmala Sitharaman had announced in her series of press conferences on the Rs 20 lakh crore economic package.

The move will offer relief to lot of companies battered by the COVID-19 crisis since these firms will not be dragged into the IBC proceedings for now. However, the decision may not be good for the banking sector since banks will have to sit on bad assets for a long period. They won’t be allowed to take those accounts to IBC for quick resolution. This could lead to potential future stress and lower realisation through resolution process.

According to rating agency Icra, suspension of fresh insolvency proceedings for a period of one year would ensure relief for the companies that are severely impacted by the Covid-19 pandemic and are unable to meet payments to their creditors. However, realisations for financial creditors in FY 22 could be even lower due to the suspension of fresh insolvency proceedings for one-year period, Icra said.

According to Icra, the COVID-19 outbreak and the suspension of new proceedings under IBC is expected to result in significantly lower realisations of upto 30-40 per cent for the financial creditors in FY20-21.

“ICRA expects the resolution of corporate insolvency resolution proceedings (CIRPs) would be impacted during FY2021 due to a decline in the number of CIRPs yielding a resolution plan as well as an increase in haircuts that lenders would have to take. The financial creditors could realise about Rs. 600 – 700 billion in FY2021 through successful resolution plans from the IBC as compared to about Rs. 1,000 billion realised in FY2020,” the agency said.

The government decided to suspend the IBC proceedings in view of the Covid-19 impact on the economy. To fight Covid, the government announced a nationwide lockdown beginning March 25 which continues even now with some relaxations. The prolonged lockdown has impacted businesses severely curtailing their ability to pay back loans to banks. The IBC holiday was announced in this context.

According to rating agency, CARE, so far, 3,774 companies have been admitted to IBC proceedings on a cumulative basis. Of this, 24 percent cases are closed by liquidation while only six percent cases have been closed through resolution. The manufacturing sector accounts for the highest share at 40 percent of the overall cases, followed by the real estate (20 percent), construction (11 percent) and trading sectors (10 percent). In Q4, the sectors have remained constant compared with the previous quarter.

Of the total 12 cases that were directed to the IBC by the Reserve Bank of India (RBI) in 2017, a resolution has been arrived at in six cases while liquidation orders were passed against two companies. In two companies, resolution has happened but banks have not received payment. Beside, in the case of another company, the resolution plan failed and hence the process has been restarted, the report said.

The six companies that had found a resolution are Electrosteel Steels, Bhushan Steel, Monnet Ispat, Essar Steel, Alok Industries and Jaypee Infratech. In Jyoti Structures and Bhushan Power and Steel, resolution happened but payment is yet to be received.

In the case of Amtek Auto, the resolution failed and the process has been restarted, said the report.