Sustainable transport, renewable energy, industrial innovation, social housing, internet and mobile telecommunications investment will benefit from EUR 5 billion of new financing approved by the European Investment Bank (EIB). During the two-day meeting in Bucharest this week the Board of the European Investment Bank decided to support transformational projects across Europe, Asia, Latin America and the Middle East.

“Europe works – it has never been as important to recall this fact as it is today. And the EIB works extremely well. We demonstrate it every day in a very concrete way. In July we exceeded our target under the Juncker Plan, mobilising 335 billion Euros in new investment across Europe since 2015. We are already busy working towards the 500 billion EFSI 2020 objective set by the Council, the Parliament and the Commission . We shouldn’t forget that this comes on top of the operations the EU Bank finances as part of its normal activity in the EU and beyond, which deliver strong, concrete benefits to Europeans and those outside the Union,” said Werner Hoyer, President of the European Investment Bank.

Ahead of the board meeting EIB President Werner Hoyer and Vice President Andrew McDowell, responsible for lending operations in the country, confirmed the EIB’s largest ever agriculture financing in Romania. The new EUR 450 million loan will support agriculture investment at 3,000 farms and improve public services in rural areas.

During the visit President Hoyer discussed the EIB’s engagement and Romanian investment priorities with Minister of Public Finance Teodorovici and attended the launch of the Three Seas initiative with Vice President Vazil Hudák.

“It is great for the EU Bank to meet here in Bucharest ahead of the Romanian EU presidency, which will preside over crucial developments, the European elections and Brexit. It is only fitting that the EIB focuses today on Romania, where we have provided more than EUR 13 billion to support 183 projects since 1991. This week the EIB provided its largest ever support to agriculture in the country. All these are marks of the exceptionally fruitful partnership between the EU Bank and this country. The welcome we have received has been extraordinary, and I wish to thank Minister of Public Finance Teodorovici for the wonderful hospitality. We look forward to supporting the Romanian presidency in every way we can, as we further strengthen this strong, positive relationship,” added Werner Hoyer.

The EIB Board of Directors, representing the 28 EU member state shareholders and the European Commission, meets once a year in the country that will hold the next EU Presidency. Romania will hold the rotating EU Presidency from 1st January, 2019.

EIB support to improve the energy efficiency of housing was amongst EUR 482 million of financing for urban and housing projects agreed by the September board meeting.

Additional financing was approved for the construction of new energy efficient housing in Wilhelmshaven, urban development in Wrocław and the Italian region of Friuli.

A total of EUR 1.2 billion of new lending for five energy projects was agreed. Among the projects to be financed by the EIB are 21 new wind farms to be built across Spain, as well as new solar and renewable energy projects in the country.

The EIB will also back investment into industrial energy efficiency schemes in Uzbekistan and the development of a dedicated terminal at the Port of Brest for the construction of offshore wind projects.

The EIB decided to provide more than EUR 820 million for six projects to support industrial investment across Europe.

This includes research and innovation by the Italian company Piaggio to reduce fuel consumption by scooters, motorcycles and commercial vehicles and develop a range of electric vehicles.

The board approved new support for investment by agriculture, tourism, industrial and service focused companies in Italy and SME’s across Spain, alongside a new EUR 70 million microfinance initiative to help micro enterprises in the Western Balkans and North Africa.

The EIB has a strong track-record supporting telecommunication investment around the world, including development of new technology, improving mobile coverage and the roll-out of high-speed broadband networks.

The board decided to support the design and roll-out of a new fibre-to-the-home network that will transform internet access for 410,000 households in rural communities in south-western France.

It also approved financing to deploy a 5G mobile broadband across Finland and upgrade and expand existing 4G services.

The EIB board supported new urban rail projects in Augsburg, Kaunas, Buenos Aires and Dhaka. Existing rail infrastructure in the Czech Republic will be modernised and rail traffic management across 13,600 km of the Polish network transformed through new EIB backing.

The EIB is the world’s largest international financier of water investment. Proposals to support the construction of a water treatment facility in the Cambodian capital Pnomh Penh and water infrastructure across Bolivia were approved by the September board meeting alongside financing to enhance the supply of clean water and sanitation in Uzbekistan.

EUR 4.7 billion of new investment backed by the Investment Plan for Europe

Financing for 14 projects approved by the EIB board will be guaranteed by the European Fund for Strategic Investments and mobilize an estimated EUR 4.7 billion of total investment. These include medical research, new sustainable transport infrastructure and renewable energy schemes. 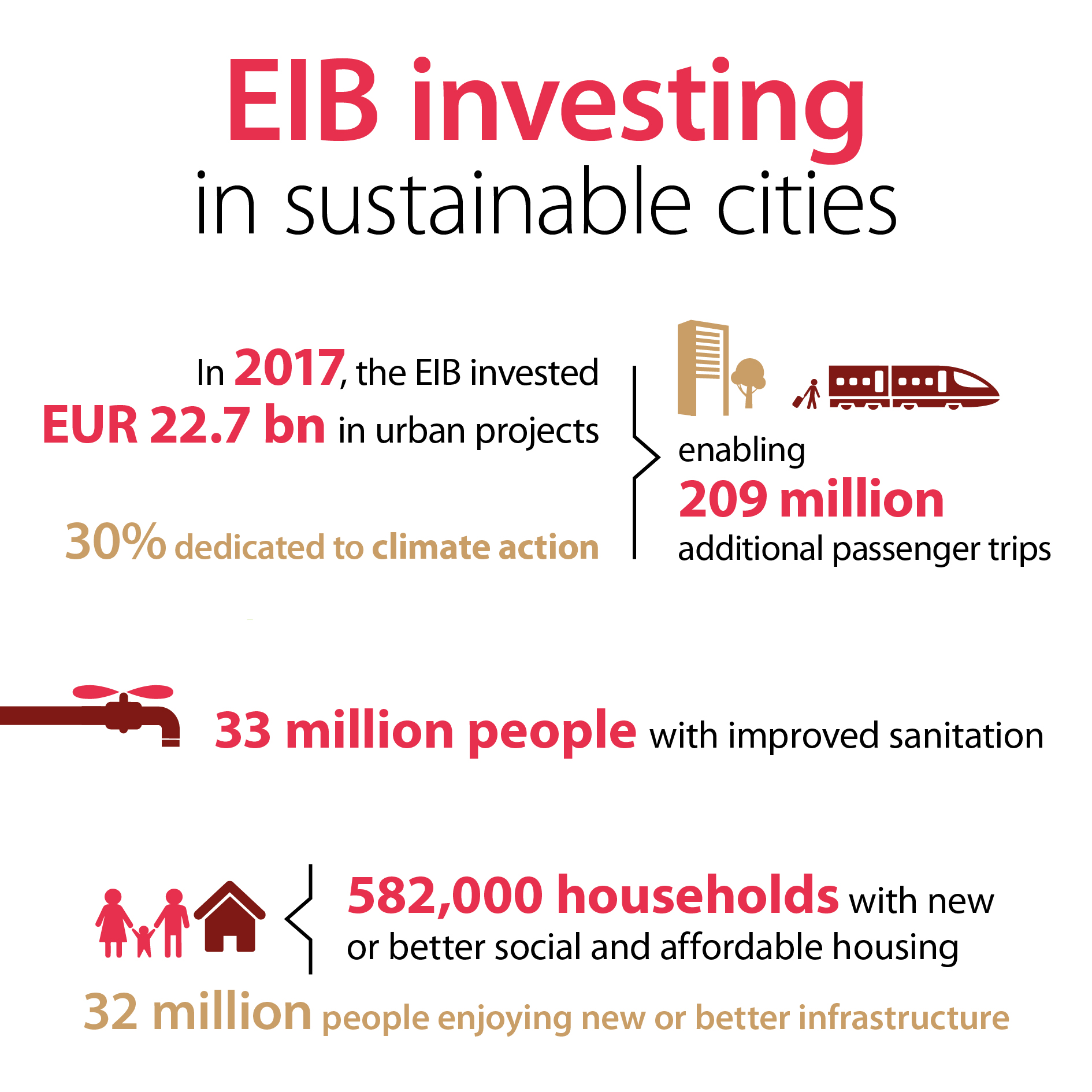 tags: EIB approves EUR 5 billion financing for innovation renewables and housing
33
previous CANADIAN SOLAR TO SUPPLY 164 MW OF MODULES TO A PROJECT IN SPAIN
next European nations plan to use more hydrogen for energy needs