Order - Petitioner is entitled to get reduced tariff of Rs.4.36 per kWh

Power consumption up 0.9 per cent in first fortnight of September: Power Minister

“I think that since COP21, there has been a visible increase in the interest and appetite in investing in this sector, from more general investors,” said Jonathan Taylor, vice president of the European Investment Bank (EIB).

“You see an increasing number of investors using ESG [environmental, social and governance] metrics as part of their investment decisions. COP21 is making us think, ‘These guys really mean it.’ And I haven’t seen this change significantly since the U.S. election in November,” said Taylor.

Institutional investors are also becoming more wary of putting money into fossil-fuel ventures that may end up as stranded assets, he said.

For example, AXA Investment Managers (AXA IM) last month announced that it will pull cash out of companies that get more than half of their revenues from coal-related activities.

“This decision is consistent with our ambitions for continued and greater ESG integration across AXA IM,” said company CEO Andrea Rossi in a press release. “It is also in line with our belief that asset managers have an important role to play in helping the global transition to a low-carbon economy.”The EIB makes sure at least 25 percent of its annual lending goes toward projects related to climate change mitigation and adaptation. In 2016, this lending rose to 26 percent, totaling €19 billion (USD $21 billion).

The bank also has a policy of not lending to energy projects that will emit in excess of 550 grams of carbon-dioxide equivalent per kilowatt-hour, which restricts it from supporting coal- or lignite-fired plant proposals unless the plants are equipped with carbon capture and storage.

So far, no such projects have been put forward, Taylor said. Neither have any new nuclear projects, although these could conceivably be funded.

The EIB expects to lend $100 billion to climate-related initiatives over the next five years, “which is consistent with the number for last year,” said Taylor.

He said the bank would also remain committed to green bonds, which it pioneered 10 years ago. So far, the EIB remains the world’s largest provider of the instruments, having issued €16 billion ($18 billion) in Climate Awareness Bonds across 11 currencies.

A World Bank study released during Innovate4Climate showed the number of carbon-pricing initiatives worldwide has nearly doubled in the last five years. And the growing appetite for carbon-related investments is forcing the EIB to shift its loan strategy, Taylor told GTM.

Previously, the bank focused on large-scale projects, such as the Noor Ouarzazate solar power complex in Morocco or the Lake Turkana wind project in Kenya. Now it is looking to support aggregated small-scale initiatives, such as building-efficiency plans.

“What we’re now doing is, we’re spreading out to do smaller-size lending, [especially] inside Europe,” Taylor said. “It is a change in business model for us.”

At an Innovate4Climate side event organized by the Global Green Growth Institute, Jiwoo Choi, the Green Climate Fund’s private-sector facility acting head, said $250 million in junior equity investments by the fund had helped attract around $30 billion for 200 projects globally.

However, financing still needs to increase by a lot.

“The gap to how you get to the trillion [dollars] is the critical issue,” he said. “If you don’t get to the trillion in time, we’re not going to build a global clean economy. I’m talking about how we get ahold of another $640 billion per year. It’s a huge number.”

Razzouk’s concerns echoed those of Dr. Stephan Singer, senior adviser for global energy policies at Climate Action Network International, who this month wrote in the London Financial Times that change was not happening fast enough to curtail climate change.

To achieve the step change in investment that is needed, said Razzouk, cleantech must do more to court the world’s capital markets. “We have to be very careful not to give the private sector the idea that we’re addicted to aid,” he warned. 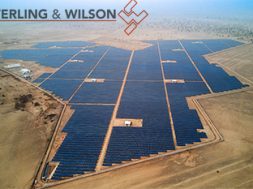