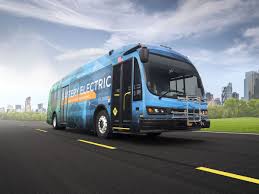 Wall Street’s obsession with electric vehicles is touching off a new round of public listings and helping clean-tech companies to forge partnerships with powerful allies.

Proterra Inc., which makes electric buses and battery systems, on Tuesday said it will go public through special purpose acquisition company ArcLight Clean Transition Corp., the latest in a wave of deals between automakers and SPACs. It comes as Lucid Motors Inc. has been in talks to go public via one of Michael Klein’s blank-check companies, according to people familiar with the matter.

EV company valuations are soaring as investors hunt for the next Tesla Inc., which saw its market capitalization reach a record $834 billion last week, topping Facebook Inc. The mania has even lifted to eyepopping heights companies with no income to speak of — such as Nikola Corp. and Lordstown Motors Corp. Plug, which in 20 years has never reported an annual profit, is now worth more $29 billion — up from $1.2 billion a year ago.

It’s not just Tesla that’s inspired investors to pile into clean vehicles. Joe Biden’s victory in the U.S. presidential election is promising to be a boon for the emission-free transport industry. During the campaign last summer, then-candidate Biden indicated stronger government support for plug-in vehicles as part of a broader push to fight global warming.

Electric vehicle stocks outperformed the broader market on Tuesday, after Xpeng Inc. got a $2 billion line of credit from Chinese banks and the ongoing CES, previously called the Consumer Electronics Show, contributed to a growing buzz about EVs, with General Motors Co. announcing plans to push into electric commercial-delivery vehicles.

Xpeng led the pack, with its American Depositary Receipts rising as much as 17%, followed by strong gains from Li Auto Inc., Nikola Corp. and Tesla Inc.

The Lucid transaction could be valued at up to $15 billion, according to people familiar with the matter who asked not to be identified because it’s private. The EV manufacturer, which is backed by Saudi Arabia’s sovereign wealth fund, targets the luxury end of the market and its chief executive officer, Peter Rawlinson, was previously Tesla’s chief engineer on the Model S sedan.

Proterra, meanwhile, is the most recent EV-maker to go public through a SPAC merger as investor appetite for EVs heats up. Blank-check companies such as ArcLight Clean have emerged as a preferred way to raise capital, with SPACs raising a record $79.2 billion in 2020, to become one of the biggest segments of initial public offerings during the year. Nikola and Fisker Inc. also went public via SPAC deals last year.

ArcLight Clean’s shares surged by as much as 92%.

“This is really an inflection point of the industry,” Jack Allen, Proterra’s chairman and chief executive officer, said in an interview. “Doing a SPAC allows us to go faster and to be able to really accelerate the investments that are ahead of us in all three of our business segments that are driving revenue today.”

Plug Power’s venture with Renault is the latest blockbuster deal for the Latham, New York-based company that’s spent decades trying to carve out a niche for hydrogen fuel cells that produce electricity through an electro-chemical process rather than combustion.

Last week, Plug announced a $1.5 billion investment from South Korea’s SK Group to promote the technology across Asia. When produced with renewable power and used in a fuel cell, hydrogen can supply energy with no greenhouse gas emissions, making it a potentially potent weapon in the fight against climate change.

Plug and Renault will offer both the vehicles and the hydrogen-fueling stations to supply them, according to a statement Tuesday. They aim to start production by early 2022 at an existing Renault plant in France, building tens of thousands of light-duty commercial vehicles annually by 2030. Financial details were not disclosed.

tags: Hunt Tesla
0
previous Terabite Ekarts launches electric food carts for street vendors with up to 80 km range
next Tata Nexon EV Was The Most Sold Electric Car In India In 2020