Home India Is India’s first round-the-clock renewable energy contract really what it claims to be?

Is India’s first round-the-clock renewable energy contract really what it claims to be?

Is India’s first round-the-clock renewable energy contract really what it claims to be?

In May, India claimed to have reached a historic milestone in renewable energy. The central government awarded a contract for the supply of 400 megawatts of solar and wind energy. Unlike other such contracts, this was the first-ever ‘round-the-clock’ supply contract.

Round-the-clock (RTC) supply overcomes the natural limitations of renewable sources like solar and wind, which produce power only when there’s enough sunshine and wind. Without RTC supply of renewable power, electricity supply companies still have to rely on coal-fired thermal power, which becomes one of the biggest impediments to a transition out of fossil fuels. Because batteries and energy storage is too expensive, no country has been able to achieve RTC renewable power supply.

Announcing India’s RTC contract, renewable energy minister RK Singh wrote in a post on Twitter that India had added a ‘golden chapter’ to its renewables story, and made a ‘new beginning’ towards schedulable power from ‘100 percent renewable energy’.

However, a closer look at the contract documentation paints a different picture. The government documentation of the contract shows that between January and May, the government amended the terms five times such that in the final form, all the conditions that required an RTC supply were deleted or diluted. The final result is that the RTC contract is neither round-the-clock nor does it guarantee schedulable power. It is at best, analysts said, a step towards a round-the-clock supply in the distant future.

Multiple changes to the contract


In India, the renewable power supply is finalised in auctions managed by the Solar Energy Corporation of India, (SECI). The SECI calls auctions for a particular amount of power and renewable power companies enter bids to supply the power at a particular tariff. The lowest bidder wins and signs a supply contract with SECI, which then supplies the power to specific state-level power utilities, which in turn supply the power to homes, offices and industries. As per norms, the terms of the power supply contract are made public in a Request for Selection (RfS) document.

The round-the-clock (RTC) supply contract’s RfS was announced in October 2019 for the supply of a blend of solar, wind power and energy storage systems. The RfS contained several terms that ensured that electricity supply companies (known as distribution companies or discoms). For example, discoms could demand power at any time in the day, and schedule for periods when it could receive electricity from the renewable power supplier.

Starting January 29, the SECI issued five amendments to the RfS that deleted these conditions and diluted others. 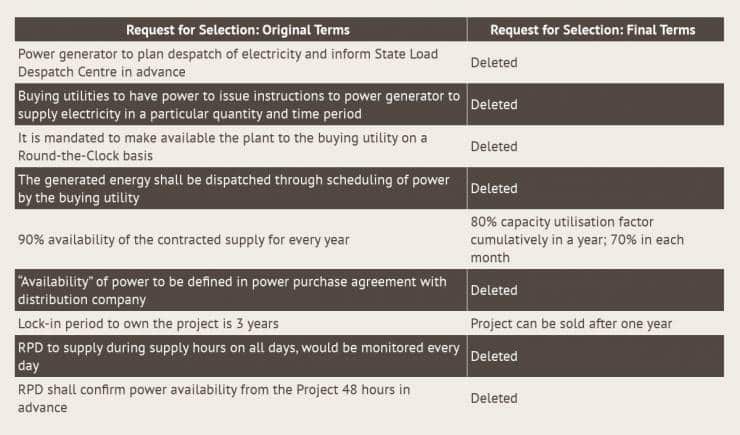 While the amendments took away the discoms’ ability to demand power on a round-the-clock basis, they also made it compulsory for them to buy power from the power generators whenever they supplied it.

Significantly, the power supplier was now required to supply power not round-the-clock, but at any time as long as the total supply totalled to at least 80 percent of the capacity utilisation factor or CUF – 400 mw in this case – in a year, and minimum 70 percent in a month.

This means that instead of supplying round-the-clock, the power could be concentrated over a few hours only, said Vibhuti Garg, energy economist at the Institute for Energy Economics and Financial Analysis. “It doesn’t mean that electricity will be supplied 24 hours a day,” Garg said. “It is not actually round-the-clock supply.”

“The main challenge with renewables is that availability of power is not synchronised with demand profile,” said Vinay Rustagi, Managing Director of Bridge to India, a renewable energy consultancy. This is the “big impediment” to the growth of renewables even though they are already cheaper than coal-based power, he said. The RTC contract is still not “truly round-the-clock” as it may not be consistent with demand profile, Rustagi said.

In addition, the amendments also allowed the supplying company to split its solar and wind plants anywhere in India, as long as at least one of them had an energy storage system. This was objected to by the National Solar Energy Federation of India, an industry lobby, which wrote to the government saying this would lead to ‘inefficient and suboptimal’ use of transmission infrastructure and go against the government’s own policy on solar-wind hybrid energy.

The RTC contract was won by ReNew Power, India’s largest renewable energy company that started operations in 2012 with a wind farm near Rajkot, Gujarat, and now operates 48 solar projects in seven states and 47 wind projects in six states.

ReNew’s win has caught the attention of market analysts.

Its winning tariff of Rs 2.9 per unit is comparable to regular wind and solar energy projects, and lower than most coal-based thermal projects, even though energy storage is still expensive. The 70-80 percent supply commitment is far higher than the average capacity utilisation of 20 percent for solar power and 30 percent for wind power. ReNew founder Sumant Sinha told The Financial Express that the company may not even need energy storage.

It is widely expected in the market that the company would simply ‘oversize’ its capacity – build four-times the necessary capacity so that together they would provide 80 percent of 400 MW, said Garg who is also associated with the International Institute of Sustainable Development. Meanwhile, the company might expect for battery prices to fall in the next two years as technologies improve, she said.

A research note by Bloomberg NEF said that the company may resort to “creative financial and technical engineering” to meet the targets and still earn a return. For example, when the power output is high, the company may sell the surplus to third parties, and when it is low, it may pay the penalties for lack of supply, the note said.

A ReNew spokesperson declined to offer comment to Mongabay-India, saying the company did not wish to add anything more than its press release issued after it won the auction. As per the press release, under the terms of the agreement, the company will have to ensure that it operates and maintains with 80 percent capacity utilization annually and 70 percent PLF (plant load factor) every month to the buying discoms. A normal renewable energy project in India operates with the capacity utilization rate of 30-40 percent depending upon the choice of technology and resource availability, the release said.

Despite India’s first RTC contract, the Holy Grail of round-the-clock renewable power is still far away.

Energy storage technologies like batteries are nascent and expensive. At current costs of batteries, a complete RTC renewable supply would cost Rs 5-6 per unit, a rate too high for India’s electricity distribution companies, said Rustagi of Bridge to India.

“From the techno-economic point of view we’re still not there,” he said.

But the government is right to push renewable energy providers in that direction from the predominant “plain vanilla” projects, he said. “We need to take it in small increments.”

0
previous India needs to renew pledge to renewable energy: Niti VC
next Appointment of Ms. Supriya Prakash Sen as a Director on the Board of Azure Power Global Limited