Jaguar Land Rover, the UK’s largest car manufacturer, has confirmed an agreement with EDF Energy to buy all its electricity from renewable sources up to March 2020. The Tata Motors-owned premium luxury carmaker’s electricity supply is backed by Renewable Energy Guarantees of Origin (REGO). This means a proportion of EDF Energy’s renewable energy is ring-fenced specifically for the company. The REGO scheme certifies the proportion of supply that comes from renewable generation – 100 percent in Jaguar Land Rover’s case. According to Ian Harnett, executive director of Human Resources and Global Purchasing at Jaguar Land Rover, “Our future is low-carbon, clean and efficient. Our programme to reduce our burden on the National Grid doesn’t end here: we seek continual improvements, both in how we can reduce energy consumption further and how to minimise our carbon emissions.

“Our aim is to give our customers an assurance that the company’s electricity will come from renewable sources: those being in addition to the solar array at our Engine Manufacturing Centre in Wolverhampton, one of the largest rooftop installations in Europe.” Béatrice Bigois, Managing Director of Customers, EDF Energy, said: “We will continue to supply Jaguar Land Rover with 100 percent renewable electricity for the next three years. Jaguar Land Rover is a valued partner of EDF Energy – we share a strong focus on sustainability and are very proud to support Britain’s biggest car maker in achieving their low-carbon ambitions.” Jaguar Land Rover’s renewables purchasing programme operates within a wider context of sustainability. The business’s latest annual Sustainability report, published today, shows the business achieved: – 32% reduction in European fleet average tailpipe CO2 emissions (2015 compared to 2007).

More than 38% reduction in energy per vehicle produced, compared to 2007 (UK manufacturing) – Building on its R&D in electric, hybrid and conventional powertrains, JLR invested over £3 billion in technology, design, engineering and manufacturing In one year alone (to April 2016) the carmaker has reclaimed more than 50,000 tonnes of press shop aluminium waste – enough to make around 200,000 Jaguar XE bodyshells. Giving all that aluminium another life has also prevented more than half a million tonnes of CO2 from being released into the atmosphere. 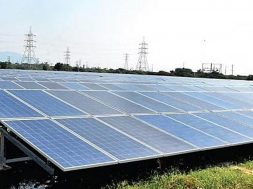