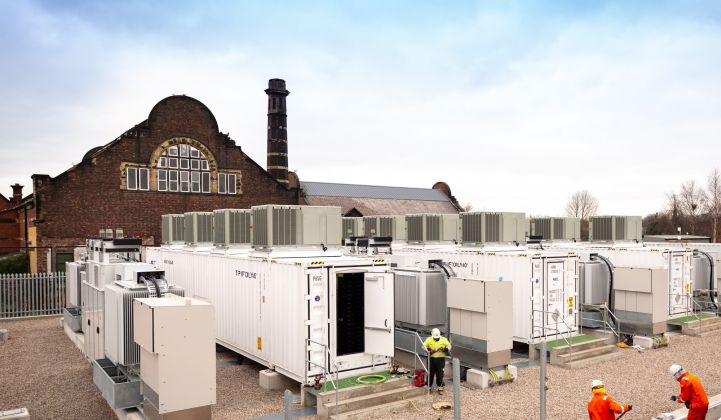 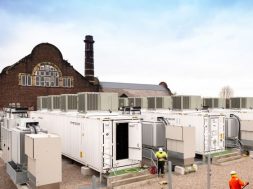 The wind giant’s strategic expansion into energy storage is more about the future than the present.

The company activated its first large-scale battery in Liverpool in late December. The 20 megawatt Carnegie Road project inaugurates a new business line for the Ørsted, which leads the global market for offshore wind development. It changed its name in 2017 from the cacophonous and emphatic DONG, short for Danish Oil and Natural Gas, after choosing to abandon fossil fuels to create “a world that runs entirely on green energy.”

The move into storage shows Ørsted is grappling with the implications of a highly renewable grid. Variable wind and solar generation creates grid volatility, which fast-reacting batteries can smooth out. Energy storage can also redistribute renewable energy in times when it’s more valuable, although bulk shifting of wind power has not yet been achieved at scale.

In branching from renewables development to storage development, Ørsted parallels other global clean energy companies, like EDF Renewables, Engie and Enel Green Power, on the path to creating the first clean energy major.

The U.K. grid has become a hotbed of these changes as the country shuts down coal plants and builds more wind and solar. Renewables now provide around 30 percent of annual electricity generation, and they keep growing.

What’s the business case?
As for what exactly the battery will do, Ørsted’s announcement was a little vague. It noted that batteries are well-suited to delivering grid-balancing services to National Grid, but spent more time talking about the “real and pressing threat” of global climate change and the imperative to decarbonize electricity. GTM reached out for more details.

“The plant has been awarded contracts to provide FFR [firm frequency response] services, however, the great thing about this asset is the battery is flexible and able to switch between operating in different markets,” spokesperson Juliette Sanders wrote in an email Thursday. “So the plan is to use the flexibility of the battery asset to provide other services and participate in other markets.”

Typically, storage developers lock down as much contracted revenue as they can before moving forward. In the U.K., that often includes a 15-year capacity contract and a shorter-term frequency contract (two years or less). Beyond that, developers have to embrace merchant risk and play the markets.

The Carnegie Road plant, which uses batteries supplied by NEC Energy Solutions, appeared in the recent T4 capacity auction for 2022-2023. The auction register describes it as a 20-megawatt system with a half-hour duration and a de-rated capacity of about 3 megawatts (a recent de-rating policy slashed the compensation that short-duration batteries can get for capacity). The project’s prequalification decision, though, is listed as “rejected.”

A company like Ørsted doesn’t need a capacity contract to make a storage project viable, said Rory McCarthy, who tracks European storage markets at Wood Mackenzie Power & Renewables. For one thing, it’s a state-backed firm with plenty of capital, and figuring out storage “has massive strategic value for them.”

On the other hand, the contract for the de-rated capacity of 3 megawatts wouldn’t bring in a ton of cash anyway, and the capacity market itself is in limbo after a surprise European Union court ruling determined it to be illegal in November. Building a business case without factoring in capacity revenue looks pretty savvy right now.

The real benefit of storage assets will materialize as a flexible companion to Ørsted’s massive intermittent portfolio.

“Although the market for storage is a bit pants now [author’s note: That’s a British way of saying ‘not great’], as a fully renewables portfolio, Ørsted will have the highest perceived value for clean flexible assets in the market place vis-á-vis energy players with other conventional dispatchable plants at their disposal,” McCarthy said.

Global energy ambitions
If Ørsted likes what it sees in Liverpool, it has a clear pathway to deploy in other global markets.

It built a foothold in the U.S. market by acquiring Deepwater Wind and Lincoln Clean Energy, amassing a combined pipeline of 8.8 gigawatts. Ørsted is also developing gigawatts of offshore wind in Taiwan. Both markets could play host to future storage development.

Despite the frequent world-saving rhetoric, developers have yet to build batteries large enough to turn wind farms into dispatchable power plants. Batteries sited on wind farms tend to be small and geared toward grid services, like Ørsted’s previously built 2-megawatt system located at the 90-megawatt Burbo Bank wind farm.

“We are looking to develop our business model over time,” Sanders said, adding the company is considering more standalone storage, batteries linked to renewables, and “other opportunities.”

Early projects like these could evolve into more ambitious efforts by wind developers as battery prices fall or other long-duration storage technologies enter cost-effective commercial service. Market changes will also be crucial.

“Storage for wind energy is a solution in search of a problem,” said Daniel Finn-Foley, an analyst at Wood Mackenzie Power & Renewables who tracks hybrid projects. “There are currently very few mechanisms in place to incentivize time-shifting or ‘firming’ wind energy to peak hours, but that is changing quickly.”

The value of storing wind power will increase as wind penetration increases, and as governments place a higher value on clean, dispatchable power (see Finn-Foley’s recent lecture on the topic for more details). A true market for large-scale wind-plus-storage is still three to five years off, Finn-Foley estimated.

“While that may seem like a long time, from an investment perspective, it isn’t, so expect more and more forward-looking wind developers to begin investing in storage now in anticipation of policies to come,” he added. “It never hurts to have solutions in your pocket when the problems present themselves.”

Carnegie Road won’t save the world, but it applies storage technology in a format that fits today’s market structures. If Ørsted makes good on its grand ambitions, larger and more consequential installations are sure to follow.