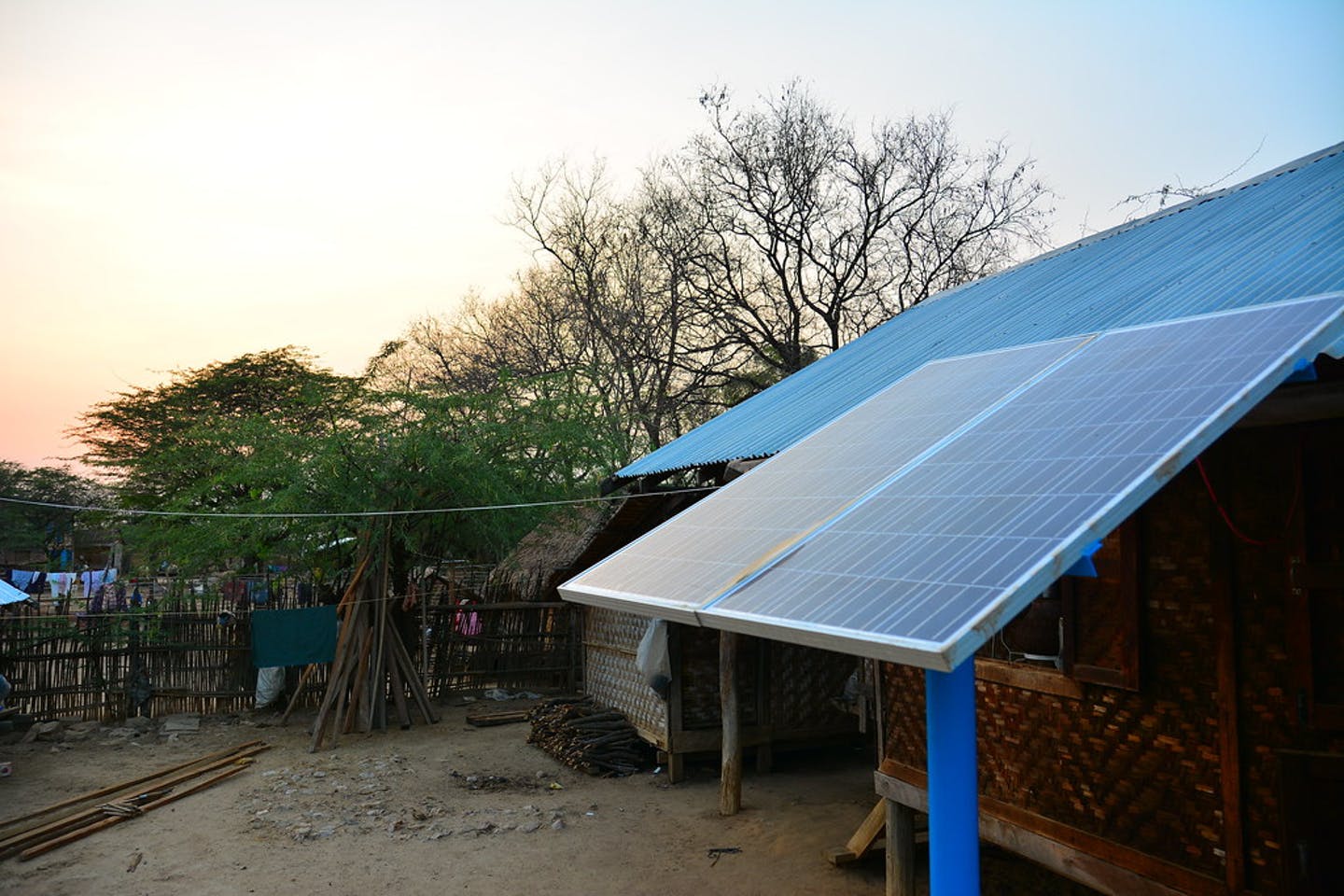 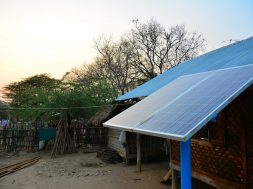 Myanmar’s first wind power project is in the doldrums after the government changes direction on how it backs projects.

Residents of Chaung Tha, a holiday resort and village on the Bay of Bengal, are still relying on diesel generators to get them through electricity blackouts more than four years after Myanmar’s government gave a Chinese company the go-ahead to build a wind farm nearby.

Shortly before leaving office in March 2016, the Thein Sein-led government signed an agreement with China Three Gorges Corporation (CTG) to develop a 30-megawatt wind farm, near the resort in Ayeyawaddy region.

What is the future of energy for Myanmar’s rural population?

The move came after the Myanmar government allowed foreign companies to conduct pre-feasibility studies on possible wind farm projects in the central and western coastal regions in 2014 and 2015 as part of its efforts to solve decades-long power shortages.

“Myanmar relies on a combination of hydropower and gas-fired plants. New hydropower projects, the main renewable electricity source in our country, are however facing public opposition due to fear of environmental damage,” said Soe Myint, permanent secretary of the Ministry of Electricity and Energy (MEE). “The government also considered coal-fired power plants to meet the electricity demand in the short term, but that was also turned down [by the public].”

Windfarms were among the possible renewable resources considered by government, he said, but several factors have limited its interest in renewables.
The government’s initial push for renewable power came as Myanmar transitioned from the military government. Regular blackouts in 2012 prompted week-long protests.

“That was why the previous government did many pre-feasibility studies for wind energy resources in 2014 and 2015 in cooperation with local and foreign private companies,” said Soe Myint.

However, the lack of state-backing seems to have stifled the Chaung Tha project, though officials insist it remains active.

“When we heard of the contract signing in Naypyidaw, we were very happy because we thought we would finally access electricity 24/7,” said Tin Nyein, a resident in Chaung Tha where the lack of a stable electricity supply plagues hotels and restaurants along the busy beach strip.

Tin Nyein says nothing has happened since 2017, when experts from Myanmar and China last visited the site. “We don’t know what happened to the project, but we know definitely that it has gone nowhere so far,” he told China Dialogue.

It is the second disappointment for locals. A hybrid mini-grid system combining solar panels, a wind turbine and diesel generator was installed in 2003 but it has not functioned properly since 2006.

Win Htay – a regional minister for Electricity, Energy, Industry and Transportation in Ayeyarwaddy – told China Dialogue that CTG officials visited him twice in 2016 and 2017 to discuss implementation.

“We, the regional government, were and are still ready to assist them to begin implementation of the project. Honestly, we want them to invest and develop wind farm projects here,” he said.

He added: “We haven’t heard any word from CTG after their last visit in early 2017.”

“It is not dead, it is still alive. It depends on the will of CTG,” according to Tin Lwin Oo, a director at the Ministry of Energy and Electricity’s department of power planning.

Though Myanmar has many hilly, rural areas and more than 2,800 kilometres of coastline suitable for harnessing wind power, the Renewable Energy Association Myanmar (REAM) has little hope that the government will lean toward wind energy, saying there are many reasons why investors will not take risks on Myanmar renewable energy projects.
“The main factor is that the Myanmar government doesn’t provide the sovereign guarantee that most investors seek for project financing,” REAM’s secretary general Myint Zaw said, referring to the government’s unwillingness to discharge the liability in the event of default.

“Wind farms need large initial capital so it would be extremely difficult for investors to invest in wind power projects here,” he added.

Soe Myint confirmed to China Dialogue that Myanmar has not provided a sovereign guarantee to any power projects to date, saying, “It is up to the investor whether to take the risk or not.”

A senior official in the Ministry of Energy and Electricity, who spoke to China Dialogue in May on condition of anonymity, said the previous government had adopted a policy to accelerate local and foreign investment in generating electricity from renewable sources by offering long-term contracts to renewable energy producers

“Under former president Thein Sein’s administration, we even considered FiTs for renewable energy sources,” said the official, referring to feed-in tariffs, an incentive that pays owners of distributed energy systems like solar and wind a certain amount per unit of electricity sent to the grid.

“That’s why our country now has its first grid-connected solar power plant,” he said, referring to the Minbu solar farm.

He added that the current government, led by State Counsellor Aung San Suu Kyi, had ignored the importance of promoting renewable generation sources.

The Myanmar Energy Master Plan, which the energy ministry issued in January 2016, anticipated solar and wind power providing about 1.2 per cent of the country’s energy by 2030. More recently, the current government stated its commitment to obtaining 8 per cent of energy from renewable sources by 2020 and 12 per cent by 2030.

“They instead turned to LNG (liquefied natural gas) to fulfil the power needs in a short time,” he said.

“Chinese companies seemed to have a high interest in renewable energy under the previous government, but China is now instead focusing on investing in large-scale LNG projects in Myanmar,” said Khine Win, founder of Yangon-based Sandhi Governance Institute.

The three China-backed plants, two in Yangon and one in Kyaukphyu, Rakhine state, were among five short-term emergency power tenders, awarded by the ministry in July 2019.

For long-term needs, the ministry issued a Notice-to-Proceed to four large-scale LNG power plants in 2018 with a combined capacity of more than 3,000MW, two of which were awarded to consortiums involving Chinese companies and the largest of which is a 1,390MW LNG plant in the Ayeyawaddy region from China’s Zhefu and Myanmar’s Supreme Group of Companies

“These power projects play a crucial role in Myanmar’s economic development as well as implementing the Chinese projects under BRI,” he said. “It also gives China the bargaining power for its mega-projects in Myanmar.”

“We are in talks with countries like Laos and China for purchasing electricity to meet the growing demand here,” said Soe Myint.

Spokesperson Soe Myint said the MEE is turning to solar as a major renewable source to meet electricity demand in the short-term.

In May, the ministry invited local and foreign companies to submit pre-qualifying bids to construct 30 on-grid solar plants, with a combined capacity of 1,060MW – about one third of the country’s available capacity of 3,100MW. It extended the tender deadline from June 18 to July 18 in response to criticism over the short window to prepare proposals.

“We assumed one month was enough for companies, but extended the deadline for one month due to the requests,” said Soe Myint. The other reason, he said, was that ministry was in a rush for the additional electricity to accommodate the next hot season.

“Solar power plants could be finished in a year, and we would like to make sure to avoid the severe blackouts again,” he said.

MEE does not appear to have wholly abandoned wind power, though it is unclear how seriously it is willing to act on it. MEE recently announced that is considering several renewable project proposals, including seven wind power projects (1,163MW) in four regions. The wind power proposals include a project with accessible installed capacity of 263MW in the central Magway region.

“Infra Capital Myanmar conducted feasibility studies in several places since 2018 when an agreement was signed,” said Myint Zaw, regional minister for Natural Resources, Environment, Electricity and Energy, adding the studies show the project is economically viable. “It will be a large project with more than 30MW and a grid-connected one. Infra Capital Myanmar requires further dealing with the Ministry of Electricity and Energy.”

“We hope it will be the country’s first wind farm to be implemented,” he said.