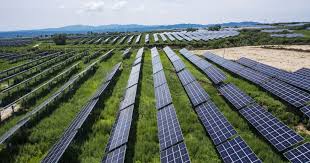 About two weeks ago, Tesla CEo Elon Musk became the richest man in the world, with his wealth surpassing that of Jeff Bezos.

This has not only reduced the cost of production but ensures the environment is protected through the use of renewable energy. In 2020, Tesla started testing the use of solar to power cars.

Kenya Power has enjoyed a monopoly on power supply since inception and there seems to be resistance towards adopting solar energy openly. In Africa, we have an abundance of solar, which we must harness so as to reduce the over reliance on Kenya Power.

In 2019, President Uhuru Kenyatta launched a 50MW solar power farm in Garissa, which is the largest grid connected solar power plant in East and Central Africa.

The project is contributing about two per cent of the national energy mix and has significantly led to a reduction of energy costs in the country, thereby promoting the development of clean, reliable, sustainable and affordable electricity.

We have other solar farms in the country and we have seen some companies install solar power to reduce operations cost. Total Kenya, one of the largest fuel distributors, had 107 service stations solarised through installation of 3,390 solar panels since 2019, with 41 stations planned in 2021.

Despite this and the benefits that come with solar power, we saw the Energy and Petroleum Regulatory Authority seeking to get in and police the installation and operation of solar through some regulations that were even opposed by the Senate.

This move has been seen by many as an attempt to protect Kenya Power from competition, as revenues continue to fall despite the company enjoying monopoly.

In the Draft Energy (Solar Photovoltaic Systems) Regulations, 2020, EPRA set tough licensing and operational conditions for solar investment in the country. Many Kenyans protested against this because it would make it hard, even for the public to install solar power in their homes.

In the proposed regulations, EPRA said a solar technician is required to pay between Sh2,250 and Sh6,000 to obtain and renew a license under the regulation. While licensing is important, it beats logic to be this punitive when we are seeking to ensure that more Kenyans are connected to electricity.

As Senate Energy Committee chairman Ephraim Maina (Nyeri senator) cautioned the rules could slow down the uptake of solar energy in the country. The Senate committee has noted that the regulations are deliberately designed to protect some energy sector players, with Kenya Power being the biggest beneficiary.

We must grow the solar industry; give subsidies to the installation and manufacturing of panels. Since solar energy is cheap enough and would help the country ensure more Kenyans have electricity, it should be the job of policy makers to ensure that it is not punitive to get it.

Homes must be encouraged to install panels, become self sufficient, and even apply for community licenses and sell power to each other. This will help many homes move away from energy sources that destroy the environment and thus help Kenya in tackling climate change.

If more industries are solar powered, their costs will come down and we will then see many goods becoming cheaper. This will help spur up the economy, as there will be more money circulating in the economy.

The monopoly by Kenya Power must also end. An open power market will make power shortages a thing of the past, and encourage new companies with innovative ideas to flourish.

If we allow the growth of the solar industry, we are set to see more power producers and thus over-reliance on Kenya Power would end.

ERPA should ensure the regulations that are put in place do not make it hard for the solar power industry to grow and benefit Kenyans.