On solar panels alone, the SCR has been saving 77 lakh energy units which converts into a sum of Rs.4 crore. A total of 6.5 MWP solar power plants/panels have been installed at the stations, service buildings

Hyderabad: For its efforts in conserving power consumption and going eco-friendly, the South Central Railway (SCR) with the help of solar panels, natural day light pipes, solar water heaters and LED lights across the State, has been recording huge savings.

On solar panels alone, the SCR has been saving 77 lakh energy units which converts into a sum of Rs.4 crore. A total of 6.5 MWP solar power plants/panels have been installed at the stations, service buildings, pumps and street lights of which 4 MWP solar plants were provided during 2017-18. 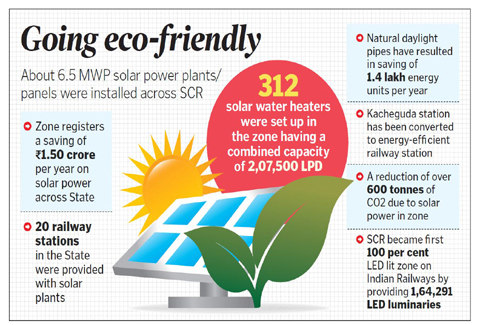 According to SCR, 51 railways stations were provided with solar plants across the zone including at Secunderabad, Hyderabad and Kacheguda. “In Telangana region, there is a savings of Rs.1.50 crore per annum through solar panels”, said a senior official.

From the year 2014, Indian Railways has taken up a massive drive towards tapping the renewable energy sources like solar power, day light pipes and LED lighting, official said adding that this will be extended across major stations where power consumption is more.

SCR has also provided solar water heaters at service buildings, officer’s rest house, institutes, running rooms and retiring rooms with about 312 solar water heaters having a combined capacity of 2,07,500 litres per day (LPD). This has resulted in the saving of Rs.2.12 crore.

This apart, natural day light pipes provided at service buildings, workshops and sheds have been saving 1.4 lakh energy units. By September, SCR has provided a total of 394 such pipes across the zone.

In the past, SCR became first 100 per cent LED lit zone on Indian Railways by providing 1,64,291 LED luminaries replacing conventional bulbs in 23,740 railway residential quarters of the zone which is expected to result in 35.4 lakh unit electrical energy saving Rs.3 crore per annum.