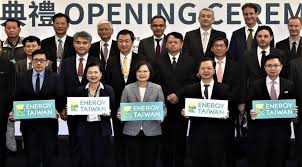 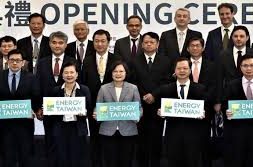 Addressing the opening ceremony of the annual Energy Taiwan exhibition, Tsai said the first focus is to continue to attract foreign investors to invest in Taiwan’s green energy development.

Since the first offshore wind farm — Formosa 1 — began commercial operation in Miaoli in 2019, many firms from Japan and South Korea have visited to learn how it is working, Tsai said.

According to the Bureau of Energy (BOE) under the Ministry of Economic Affairs, the aggregate production capacity of Taiwan’s offshore wind energy sector totaled 128 megawatts as of July 2020, but is expected to hit 5.7 gigawatts by the end of 2025.

The bureau said accumulated investments in offshore wind energy development in Taiwan are forecast to hit NT$1 trillion (US$34.48 billion) by the end of 2025 with accumulated production value estimated at NT$1.2 trillion, which is expected to create 20,000 new jobs.

From 2026-2035, the aggregate production capacity of the offshore wind energy sector in Taiwan is expected to increase by a further 10GW, Tsai said.

As for solar energy development, accumulated investments are forecast to hit NT$1.2 trillion by the end of 2025, with production capacity forecast to rise to 20GW from 4.7GW as of the end of July 2020, the BOE said.

Solar energy accounted for 57 percent of total green energy capacity in Taiwan as of July 2020, and that ratio is expected to grow to about 66 percent by the end of 2025.

In line with growing renewable energy development, the government will try its best to build a comprehensive supply chain in Taiwan and strengthen competitiveness in a bid to help Taiwanese firms take a share of the global market, Tsai added.

In addition, the government has plans to set up a market mechanism with financial institutions to allow sound green energy trading in Taiwan, Tsai said.

The government is determined to ensure the stable supply of green energy in Taiwan, as a way of maintaining the competitiveness of local high-tech industries, which are generally large power consumers, she added.

As of July, Taiwan Semiconductor Manufacturing Co., the world’s largest contract chipmaker, had signed agreements to purchase an additional 1.2 GW in renewable energy in a bid to cut carbon emissions and fulfill its corporate social responsibility.

In winter, Wang said, the northeasterly wind system seen in Taiwan is expected to allow the local offshore wind industry to develop and produce more electricity.

A total of 150 exhibitors demonstrate their products at 500 booths, with the aim to attract potential buyers, according to the organizer Taiwan External Trade Development Council, a government-funded trade promotion group.