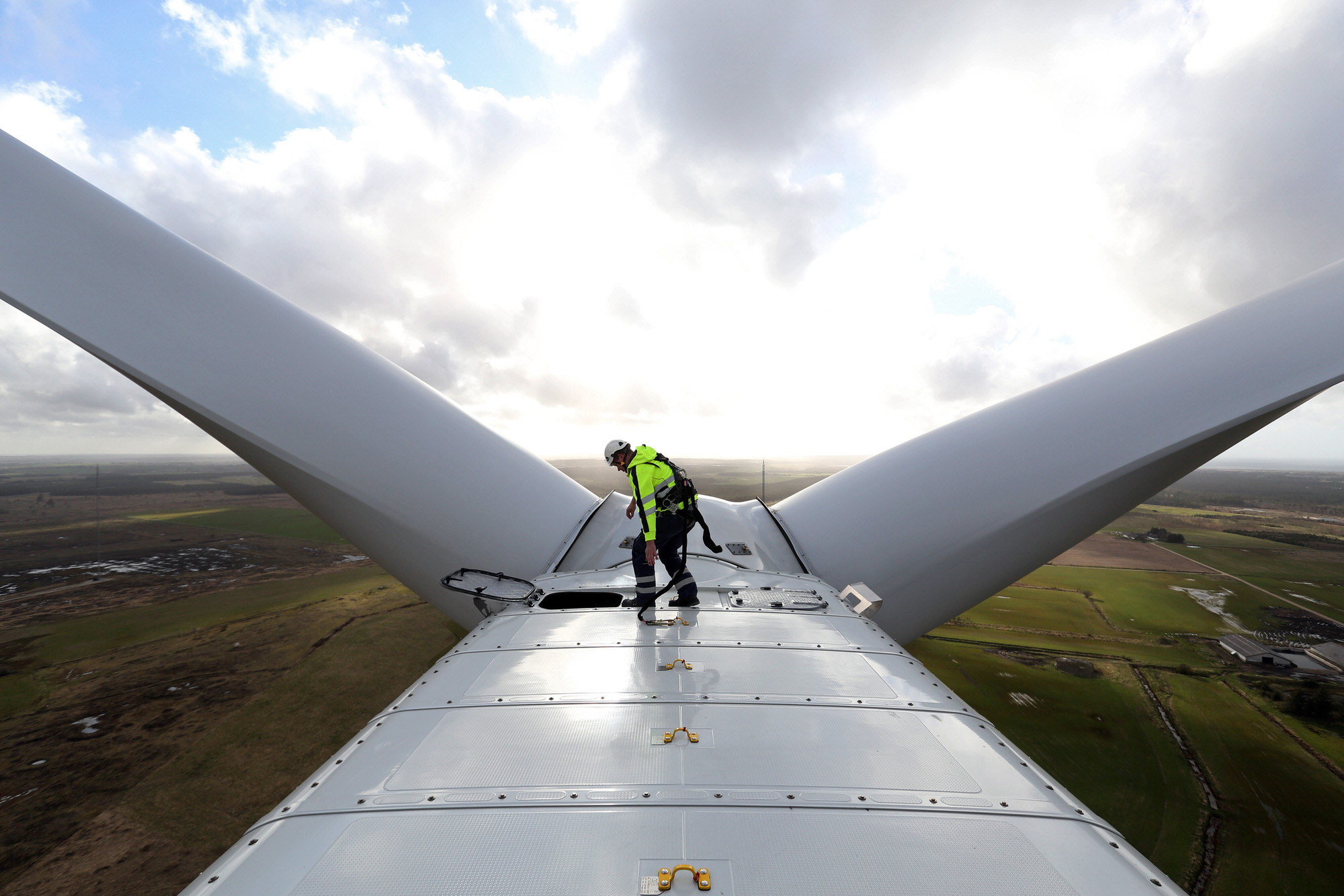 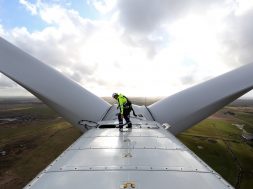 Global commissioning of onshore wind turbines declined 3% in 2018, partly due to a slowdown in India and Germany. Growth is expected to bounce back in 2019, with a 32% jump to 60GW

London, New York and Tokyo: Developers commissioned a little over 45GW of onshore wind turbines globally in 2018 compared with 47GW a year earlier. Just four manufacturers accounted for more than half, or 57%, of the machines deployed: Denmark’s Vestas, China’s Goldwind, GE Renewable Energy of the U.S. and Spain’s Siemens Gamesa.

The latest data from BloombergNEF (BNEF) show that Vestas extended its lead in the industry, with 10.1GW of its onshore turbines commissioned in 2018 – a global market share of 22% compared with 16% in 2017. The statistics draw on BNEF’s global database of wind projects and extensive information from the industry.

China’s Goldwind rose from third to second place, lifted by a strong performance in China, where it captured a third of the 19.3GW market. The company’s global footprint, however, remains limited: only 5% of Goldwind’s 6.7GW were commissioned outside China. GE came third with 5GW – six out of every ten GE turbines were commissioned in the U.S. Both GE and Vestas commissioned just over 3GW in the U.S., with Vestas leading by 44MW in the neck-to-neck race for U.S. market leadership.

Siemens Gamesa, formed in 2016 from a merger of the wind business of German engineering giant Siemens and the Spanish turbine maker Gamesa, dropped from second to fourth place, with 4.1GW commissioned in 2018. This is 40% less than in 2017, although the tally does not include a number of very large wind farms that are only partially built and will not come online until 2019.

“Chinese manufacturers rely almost solely on their home market,” said Tom Harries, senior wind analyst at BNEF and lead author of the BNEF report Global Wind Turbine Market Shares. “Of the European onshore wind turbine makers to make the top 10, Vestas and Nordex actually commissioned more capacity in the Americas than in Europe. Most of Enercon’s turbines are in Europe. Siemens Gamesa is the most diversified, with a near equal split across Europe, the Americas and Asia.”

“In offshore wind, it’s been a record year for China, and we will see more growth,” Harries continued. “Some 1.7GW of the global 4.3GW was commissioned there. In Europe it was a tight race between Siemens Gamesa and MHI Vestas. GE has some projects coming up in France, and we also expect to see orders for their new 12MW platform.”

Total onshore wind installations in 2018 were 11.7GW in the Americas, 8.5GW in Europe[1] and 1GW in Africa and the Middle East, while Asia accounted for 24.2GW. BNEF registered new wind farms starting full commercial operation in 53 countries.

David Hostert, head of wind research at BNEF, said: “Last year was a bit of a mixed picture in terms of global onshore wind installations, with only 45.4GW commissioned. Still, add to that 4.3GW offshore wind and 2018 ended slightly lower than 2017. Now it is time for the manufacturers to buckle up for two stormy years ahead: we predict demand for around 60GW of onshore capacity in both 2019 and 2020 with increases in all regions. However, a lot of this impressive-sounding volume rides on extremely competitive pricing, add-on products and services, and new financing models. This will be tough to deliver for the Big Four, let alone the smaller turbine makers.” 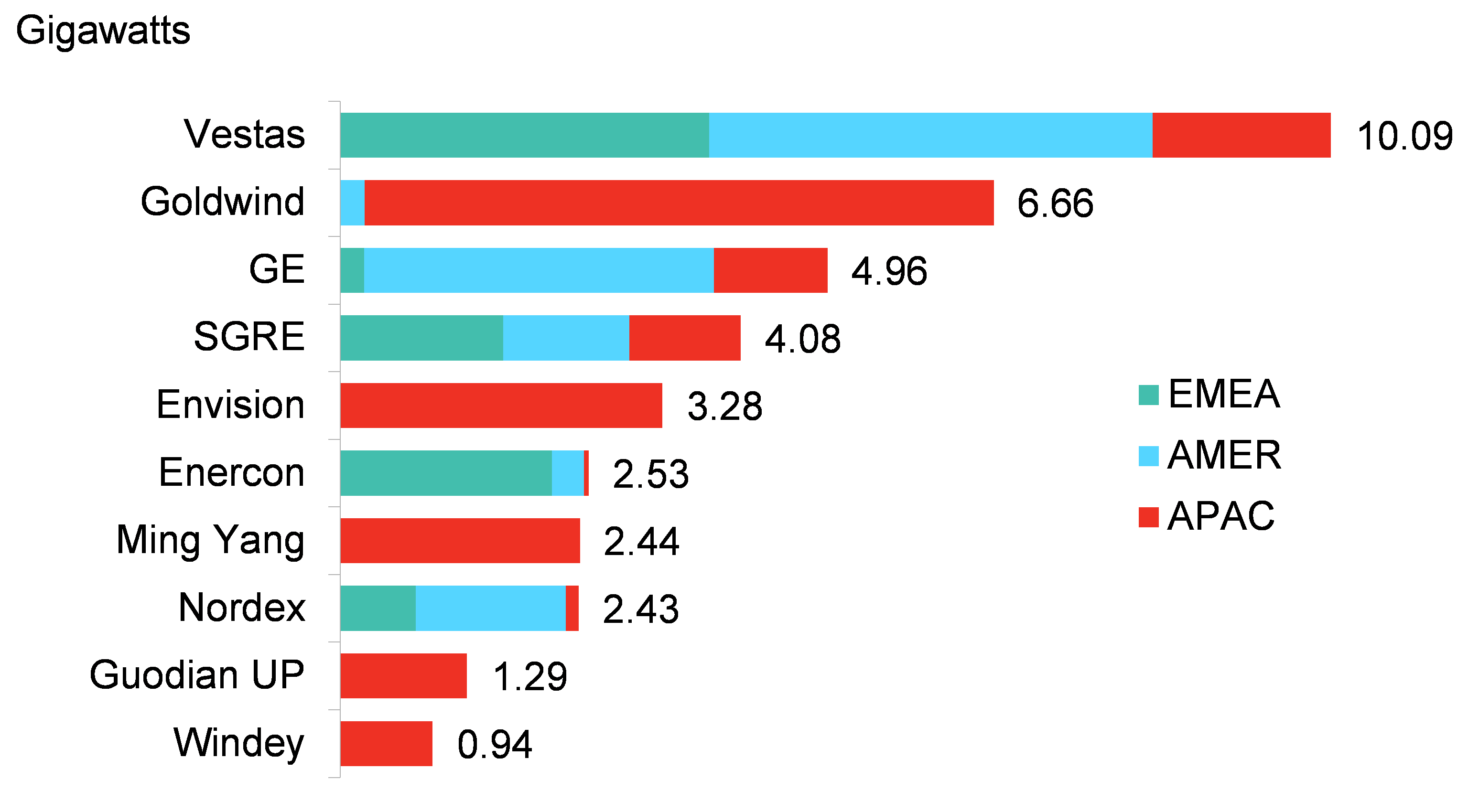 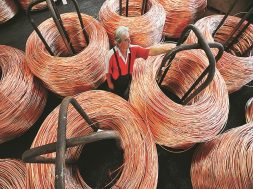