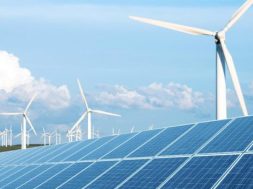 Wind-solar hybrid (WSH) power, which harnesses both solar and wind energy, is fast emerging as a viable new renewable energy (RE) option in India. According to CRISIL Research estimates, about 15 gigawatt (GW) of WSH power will come up over the next five years, riding on strong support from central public sector undertaking Solar Energy Corp of India (SECI) and several state governments.

As per the ratings agency, of the 15GW WSH power, about 10GW is already in the works – either under construction or being tendered – and will start feeding the grid by fiscal 2024.
To put things in perspective, India had 37.69GW of standalone wind energy capacity and 35GW of solar capacity as of fiscal 2020.
Rahul Prithiani, director or CRISIL Research says, “We expect the WSH market to grow and evolve as the number of projects and developers who seek to unlock value from the hybrid increases. However, the availability of good sites with strong irradiation and high wind speeds would be a key challenge, as evident in waning developer interest in the wind energy sector.”
SECI intends to set up 5GW of solar and wind projects with storage under the engineering, procurement and construction (EPC) mode over the next 10 years, adding to the country’s total of 37.69GW of wind energy capacity and 35GW of solar capacity as of fiscal 2020. WSH projects, which harness both solar and wind energy, are expected to account for a good chunk of the pipeline. In January this year, SECI invited bids for 1.2GW WSH capacity under its tranche-III tender for RE projects. According to CRISIL Research, there are proposals to set up around 3.9GW of pure-play WSH projects and about 4.5GW of WSH projects with energy storage systems currently.
WSH projects with storage are capable of catering to peak load generation, besides improving the capacity utilisation factor. Hence, these have the potential to reduce the country’s dependence on gas- and pumped hydro-based peaking plants, the ratings agency says.
Integrating wind and solar energy projects with the grid can be challenging because of the variability in generation from these projects. However, it says, in WSH projects, the two energy sources complement each other to reduce the variability of generation and improve grid security.
“This could help distribution companies (discoms) overcome their reluctance in power offtake from RE plants. Also, for developers, cohabiting solar and wind plants could result in a higher capacity utilisation factor (CUF), even if they do not get the optimum generation sites in terms of irradiance and high wind speeds,” the ratings agency says.
CRISIL says, WSH could also emerge as a saviour for India’s wind energy sector, which has seen developer interest waning due to technical and pricing issues.
Over fiscals 2018-2020, wind energy capacity logged a compounded annual growth rate (CAGR) of just 5.2% to 37.69GW, while that of solar clocked 26% to 35GW.
“In fact, tendering, auctioning and execution of wind projects have slowed. For instance, 47% of the projects tendered for bidding in fiscal 2020 were under- or un-subscribed, 7% were cancelled and 24% delayed. States with high wind power generation such as Tamil Nadu have also complained that banking on wind energy is costly and poses technical challenges to the grid,” the ratings agency added.
In addition, CRISIL Research says it expects about 1.1GW of hybrid projects to come up as part of around 5.4GW up for development under the government’s round-the-clock or RTC power scheme, which has a mandatory 51:49 blend of RE and thermal.
On the pricing front, as per CRISIL Research’s analysis, a tariff of Rs3.0-Rs3.2 per kilowatt-hour (kWh) is required to achieve equity internal rate of return (IRR) of 9-11% in wind power projects.
It says, “Following the recent removal of tariff caps on RE tenders, wind tariffs could go up in order to price in the implementation challenges. Should they do so, WSH projects will undercut wind tariffs. In such a scenario, WSH could offer a lifeline to the wind energy market by cross-subsidising costly wind power with cheaper solar power, thus helping the RE segment expand.”
Pinal Mehta, associate director of CRISIL Research says, “As with all power projects, pricing will be key to the success of WSH projects. We expect WSH tariffs to be in the Rs2.8-Rs2.9 per kWh range, with a wind-heavy WSH configuration. We believe WSH pricing will become more competitive if the co-location clause (necessitating the wind and solar components to be located at the same place) is removed.”
In the case of WSH-with-storage projects, CRISIL Research says it believes the weighted average tariff (peak and off-peak) of Rs4.04- Rs4.30 per kWh, as discovered in recent bids, is competitive with thermal power tariffs, which are about Rs 4.4 per kWh.
CRISIL says it expects the WSH market to grow and evolve as the number of projects and developers increases. Besides, new use cases are likely to come up that could make wind and solar truly dispatchable, thus overcoming the intermittencies currently associated with RE power.
“Nevertheless, land availability and policies such as co-location will remain key monitorables for the viability of WSH projects. Other challenges, including adequate transmission infrastructure and technical issues such as grid balancing, would need to be addressed, too,” the ratings agency concludes.