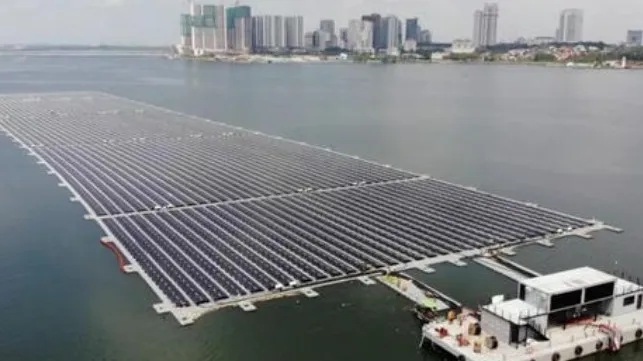 On the island of Batam, the world’s largest floating solar farm is being built in Indonesia on an area of ​​1,600 hectares, with an expected output of 2.2 GW. It will also have the largest ESS with a storage capacity of over 4000 MW.

Construction will start in 2022 and be completed in 2024. The Sunseap Group from Singapore, in cooperation with Badan Pengusahaan Batam (BP Batam) operator of a free trade zone in Indonesia, expects the solar park to generate more than 2,600 GWh of electricity per year, which is more than 1.8 million tons of carbon per year Year could make up for it.

The floating solar panels are installed in a former saltwater bay that has become the Duriangkang Reservoir. It is the largest water reservoir in Batam holding a volume of 101.2 million cubic meters of water.

The reservoir takes up more than half of the freshwater. Floating solar panels reduce evaporation, thus keeping more water in the reservoir and at the same time ensuring that the solar panels stay cool. This allows the panel to generate more clean energy, creating a synergistic relationship.

Sunseap also plans to establish a Sunseap Academy in Batam to recruit and transfer skills to the more than 3,000 people involved in building the solar farm. It will deliver uninterrupted solar energy 24 hours a day, 7 days a week.

Some of the green energy will be consumed within Batam, while the rest can potentially be exported via a submarine cable to Singapore, which is 48 kilometers from Batam. Frank Phuan, the Co-Founder and CEO of Sunseap, highlighted several features of using the floating panel design, similar to what the company recently completed in Singapore.