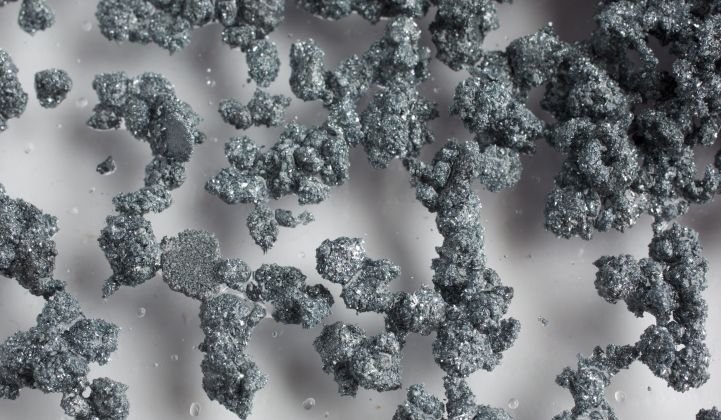 California is looking for ways to keep power flowing to customers amid wildfires without burning fossil fuels. A Canadian storage technology startup thinks it has the solution.

This summer, Toronto-based e-Zinc won a $1.3 million grant from the California Energy Commission to demonstrate its long-duration zinc battery for the commercial and industrial market. As the state’s worst wildfire season on record rages on, the urgency to find new tools for clean backup power has only grown.

The batteries precipitate little bits of zinc out of a solution while charging, using a windshield-wiper-like tool to clear the plate and make room for more charging. This allows for longer-duration storage, while the cheap component costs promise to keep prices low relative to other options on the market.

The CEC grant will help the startup stake a claim on an underserved market, CEO James Larsen said in an interview.

Lithium-ion batteries are good at daily cycling for bill management, but they can’t run long enough to guarantee multiday backup, he noted. Customers looking for economic multiday backup power usually have to turn to fossil fuels, like gas or diesel generators.

“We can do both: We can do the short-duration time-of-use arbitrage and demand-charge reduction and help monetize those opportunities for customers, but we can also provide them up to two days of backup power in the face of an outage,” Larsen said.

Green backup for a greenhouse

Since e-Zinc’s product is less energy-dense than lithium-ion batteries, it would be harder to fit into residential settings or dense urban areas. The first deployment will be at Houweling’s, a commercial greenhouse in Camarillo, up the coast from Los Angeles. The 125-acre site already hosts a 1-megawatt solar array; fitting a container packed with zinc batteries won’t be an issue.

The initial installation, expected in 2022, will likely be 40 kilowatts with 24 to 48 hours of duration. During normal times, if such a thing ever returns to California, it will capture solar generation to discharge during peak hours and to power irrigation at night. When blackouts loom, it can shift to backup power mode.

This is one of five projects e-Zinc is installing through 2022. This fall, the company is moving into a new manufacturing space where it will assemble the systems into their containers and conduct final quality testing.

The startup, founded in 2012, raised a CAD $3.4 million seed round early this year from Chicago’s Energy Foundry, Toronto’s MaRS Investment Accelerator Fund, the Sustainable Chemistry Alliance and Emeraude Capital. It also stacked more than CAD $6 million of non-dilutive grants to fund early demonstrations, providing runway until at least the end of next year.

The staff of e-Zinc has been honing the technology since 2012, using a series of non-dilutive grants to fund commercialization. (Photo credit: e-Zinc)

Long duration for the people

When the grant was awarded earlier this year, California’s key grid concern was keeping businesses online in the event of preemptive power shutoffs that utilities now use to avoid starting wildfires. But in August, a heat wave pushed demand to the edge of available supplies, forcing rotating outages in California for the first time in two decades.

That event made clear that the long-discussed “duck curve” problem, in which solar production drops off and forces a quick ramp of other resources to meet evening demand, has arrived already. Energy storage has considerable policy and investment momentum behind it as the state looks to solve this issue.

Short-duration batteries are well suited to serving this immediate need, Larsen noted. His technology is a better fit for when the transition progresses further.

As California works toward 100 percent carbon-free electricity, “bulk grid shifting requirements will lengthen in duration,” he explained. “Therefore, the market will begin to favor longer-duration technologies like e-Zinc to handle this requirement.”

The California Public Utilities Commission has concluded that the state should build 1 gigawatt of long-duration storage by 2026, but the state currently lacks a clear mechanism to procure such resources.

By selling directly to customers, e-Zinc needn’t wait for new policy mechanisms to appear. Savings from daily cycling with current electric rates can recover about half the cost of the system, he said. The rest of the value needs to come from the customer choosing to pay for multiple days’ worth of backup.

The technology could scale up to megawatt-size power plants, but the market demand for that is probably at least five years off, Larsen noted.

Betting on the commercial storage market is not a sure thing; that sector has had its ups and downs, and several early innovators have pivoted away from the battery-based demand-charge management business model. Two days’ worth of storage is also still limited compared to generators that can run as long as they have fuel. But generators can’t save money through daily cycling as e-Zinc can.

The company first has to prove itself in the field, then prove out how big the market is for midsize commercial bill management and multiday backup. Nobody’s tried to serve that market, so any demand there remains untapped.

0
0   0
previous Inside BP's plan to dominate the global solar industry and rival the world's largest operators
next Tata Power Venture TPRMG's 200 Microgrids Expected to Be Ready by 2021: Rockefeller Foundation