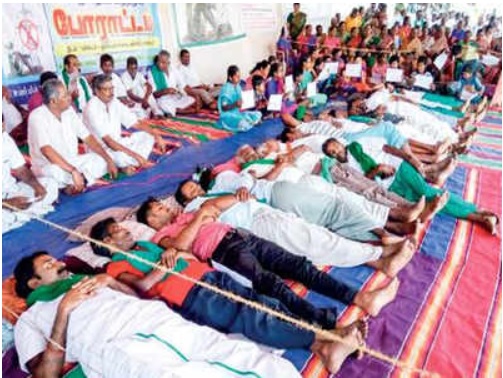 High tension: Tamil Nadu in a power struggle with farmers 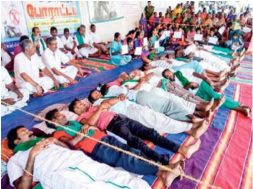 High tension: Tamil Nadu in a power struggle with farmers

Chennai: Never has Tamil Nadu been in the throes of such an intense development Vs environment debate. After the Sterlite copper smelting plant expansion proposal and the `10,000 crore Salem-Chennai highway project, it’s the multi-crore Raigarh-Pugalur high voltage direct current (HVDC) project that has sparked protests by farmers.

While power sector experts say the project that integrates renewable and non-renewable energy sources in the national grid, to reduce transmission losses would help ensure uninterrupted power supply to 80 million people, farmers fear loss of their land, its value and productivity. The state government, rather than assuaging these apprehensions and taking farmers along, is focused on quelling the protest. In the absence of transmission lines, generation of power in the state is the only option, which involves setting up new power plants and the ancillary costs and pollution. This awareness has to be created among farmers.

After a fortnight of continuous protests by farmers in 13 districts through which the power lines are proposed, the government last week invited the protesting farmers for a discussion. But the talks failed as the demands of farmers to put on hold the project and lay underground cables instead of overhead towers was rejected. “The minister agreed with our view that the towers will affect agricultural land but refused to accept our demand for laying underground cables,’’ said P Shanmugam, state secretary of TN Vivasaigal Sangam.

Experts in the power sector agree with the Tamil Nadu power minister P Thangamani, who has categorically stated that underground cabling is not viable. “Even in developed countries there are no underground cables that carry 800kV capacity that is proposed in this project,” he said. The state government appears firm about implementing the Power Grid Corporation of India (PGCI) project, touted to be the longest electricity corridor in the country. Proposed at a cost of `2,40,00 crore, the project envisages erection of about 4,500 towers from Raigarh in Chhattisgarh to Pugalur in Karur district for a distance of 1,800km and then to Thrissur. In TN, around 900 transmission towers are set to be erected to transmit 6,000MW of power, of which 4,000MW would be for TN, while the rest for Kerala.

Those subscribing the development theory say such projects are the need of the hour and a growing TN cannot afford to get left out. “Imagine the power requirement of a town like Tirupur five years later. Such a project is necessary not just to meet the growing power requirement but also to link non-renewable energy sources like wind mills and transfer of surplus electricity to the national grid,’’ says K Kasturirangaian, chairman of Indian Wind Power Association.

Wind energy producers said the northern and southern parts of the country are not adequately connected yet for electricity sharing. “In summer, our generation has to be sent north and in winter we need additional power from there,’’ he said. TN generated about 12 billion units of wind energy. “Three billion units go waste because we are not connected. The government should ensure agriculture is not affected by such projects,” he said.

For the farmers, towers on a small plot would mean much of it is used up in setting up the base of the tower rendering it partially unproductive. Also, only certain crops and no tall trees can be grown on the plot. These are practical livelihood concerns besides the worry that radiation from the towers may affect agriculture — regarding which experts say there are no conclusive studies. But, the farmers, many of whom own small plots and grow coconut trees, are unrelenting. “When underground cabling can be done in Kerala, why not Tamil Nadu,” asked P Ayyakannu, a farmer leader. A senior officer from Power Grid Corporation of India said it was only for a short distance that underground cables are laid in Kerala. “Only for 20km underground cable is laid in Kerala. Those cables are for transmitting low capacity power while the main line that passes through TN is 800kV,” the official said.

P Shanmugam, said, “Once a tower is erected, the farmer virtually loses his right over the property. So, any amount of compensation will not be adequate. Instead, the state should pay farmers a rent for using the land.’’