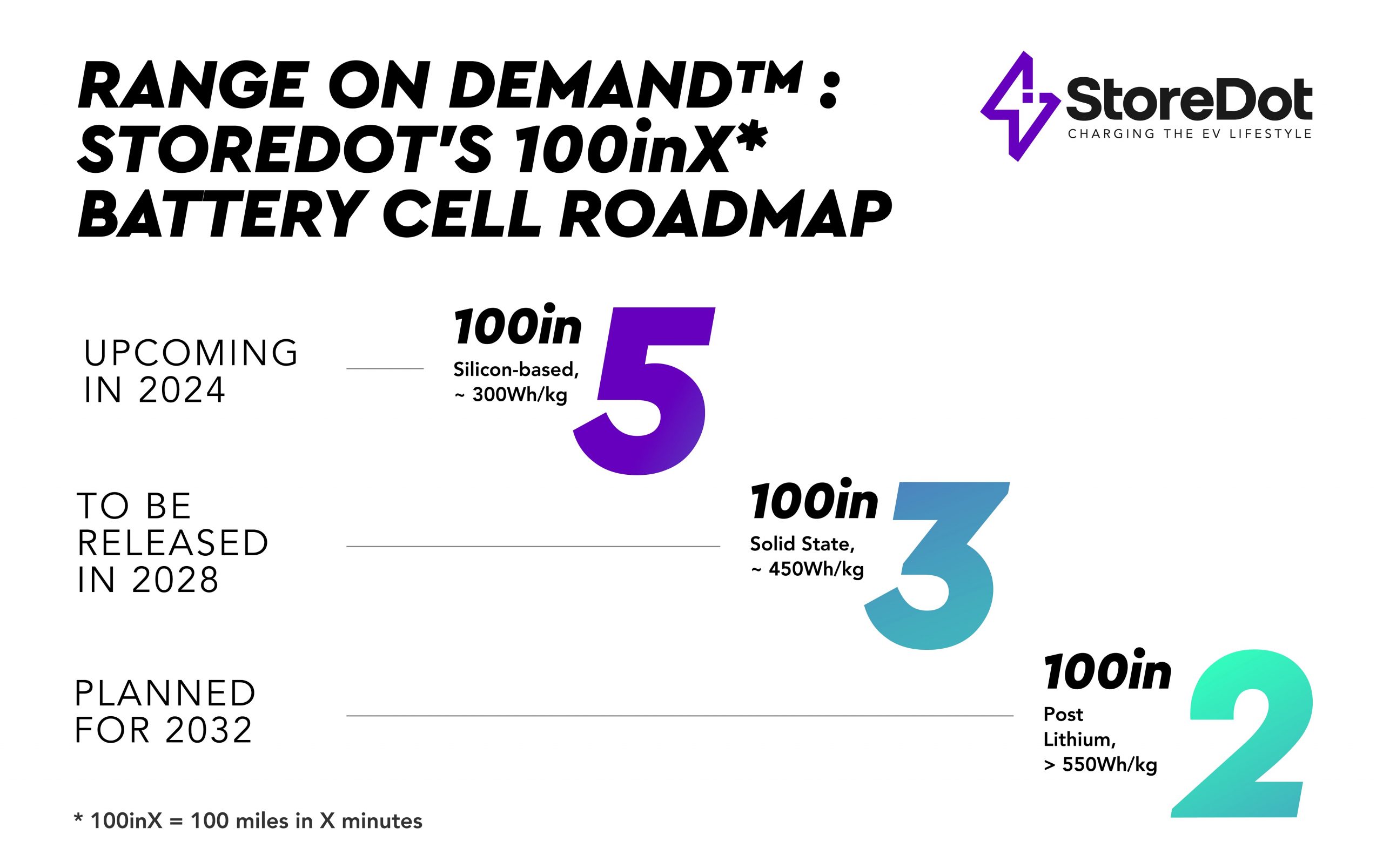 STOREDOT, THE EXTREME FAST CHARGING BATTERY PIONEER, ON TRACK TO ACHIEVE 100 MILES PER 5 MINUTES OF CHARGE IN 2024 AND 100 MILES IN 2 MINUTES WITHIN A DECADE – EQ Mag Pro 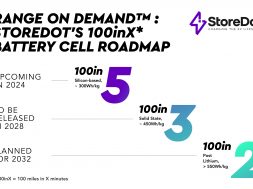 STOREDOT, THE EXTREME FAST CHARGING BATTERY PIONEER, ON TRACK TO ACHIEVE 100 MILES PER 5 MINUTES OF CHARGE IN 2024 AND 100 MILES IN 2 MINUTES WITHIN A DECADE – EQ Mag Pro

Herzeliya, Israel: StoreDot, the pioneer of extreme fast charging (XFC) battery technology for electric vehicles, has revealed its strategic technology roadmap, labeled ‘100inX’, which will deliver batteries capable of charging a 100 miles of range on just a 2 minute charge, with mass production readiness planned within 10 years.

StoreDot is also firmly on track for its first milestone for global automotive manufacturers: producing its silicon-dominant anode XFC lithium-ion cells at scale by 2024 that will be capable of delivering 100 miles of range in 5 minutes of charge.

In parallel, StoreDot is already at the advanced stages of developing groundbreaking semi-solid-state technologies which will further improve the batteries by 40% over 4 years – delivering 100 miles of charge time in just 3 minutes and be mass production ready by 2028.

Dr Doron Myersdorf, StoreDot CEO “It’s absolutely crucial that we give global automotive manufacturers a clear, realistic and hype-free roadmap for the introduction of our fast-charging battery technologies. After intense development of our silicon-dominant chemistries we will be mass-production ready by 2024, delivering a transformative product that will overcome the major barrier to the widespread adoption of electric vehicles – charging times and range anxiety.

“However, we are committed to a rapid transition to a cleaner, zero-emissions world and our strategic technology roadmap extends long after 2024, where each milestone represents an impressive performance improvement – a major impact on the driver’s experience. We are also progressing with our semi-solid state battery aiming for its production at scale by 2028, which will demonstrate a better charging experience for EV drivers in terms of miles per minute of charging.

“Our ultimate goal though, and one that is now absolutely in our grasp, is to produce cells that will revolutionize charging times, achieving 100 miles of range in only 2 minutes. This breakthrough performance that was once considered impossible – is achievable with StoreDot’s technology in just 10 years from now.”

StoreDot’s ground-breaking extreme fast charging cells will be available in both pouch and the 4680 family form factor – the formats increasingly favored by the majority of global car manufacturers. Pioneering work for these XFC cells has been undertaken with participation of global experts from Israel, the UK, the US and in China. ‘100in5’ cells of StoreDot’s XFC technology are already being tested in the real world by a number of automotive OEMs.

StoreDot is a pioneer and leader of extreme fast charging (XFC) batteries that overcome the critical barrier to mainstream EV adoption – range and charging anxiety. The company has revolutionized the conventional Li-ion battery by designing and synthesizing proprietary organic and inorganic compounds, making it possible to fully charge an EV in just five minutes – the same time it takes to refuel a conventional combustion engine vehicle.

Through it’s ‘100inX’ strategic roadmap, StoreDot’s battery technology is optimized for best driver experience with XFC in Li-ion batteries, as well as future technologies for extreme energy-density (XED). StoreDot’s strategic investors include VinFast, BP, Daimler, Samsung Ventures and TDK. In 2019, the company achieved a world first by demonstrating the live full charge of a two-wheeled EV in just five minutes. In 2020, the company demonstrated the scalability of its XFC batteries and is on target for Electric Vehicle battery production at scale by 2024.