Bloomberg rips Trump for not taking action on climate change 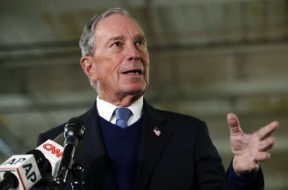 Americas
“If he’s not willing to listen to his own administration’s scientific advisers – and he isn’t – he should at least listen to the people in this film,” Bloomberg said WASHINGTON: Democratic presidential prospect Michael Bloomberg is promoting a new documentary film on climate change, but the billionaire philanthropist says the one person he thinks […]
Read more