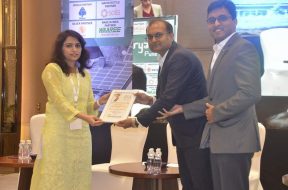 Featured
Growatt received THE MOST PROMISING ROOFTOP INVERTER COMPANY OF THE YEAR AWARD at Suryacon Pune Conference held by EQ Magazine. In 2019, Growatt was among the TOP 3 suppliers of string inverter in India according to Mercom and NO.1 solar rooftop inverter supplier in India according to the report by BRIDGE TO INDIA. Growatt in […]
Read more