By 2050, it wants to generate 500% of its energy needs from renewable sources.

It’s one-and-a-half times bigger than the US state of Texas, almost as big as Egypt and has a population of 1.7 million people. The state of South Australia is also a global leader in the use of renewable energy.

The progress made by South Australia could help the rest of the world find a faster route to a successful energy transition, according to a report from the Institute for Energy Economics and Financial Analysis (IEEFA).

Called A Grid Dominated by Wind and Solar Is Possible, South Australia: A Window Into the Future, here are seven takeaways from the report.

1. Most – and sometimes all – annual demand can be met by wind and solar.

The South Australia state government set a 2020 target of getting 26% of the state’s energy from renewables. It smashed that goal, with renewables delivering 60% of its energy needs.

In October of that year, 100% of the state’s energy came from renewable sources – just for one hour, but it marks an impressive turnaround for a region that was 100% reliant on fossil fuel as recently as 2006.

Key to its success has been a commitment to a mix of renewable sources, the IEEFA says. “South Australia therefore provides valuable lessons for the rest of the world, showing what is possible with variable renewable energy (VRE) and distributed energy resources (DER) integration.” 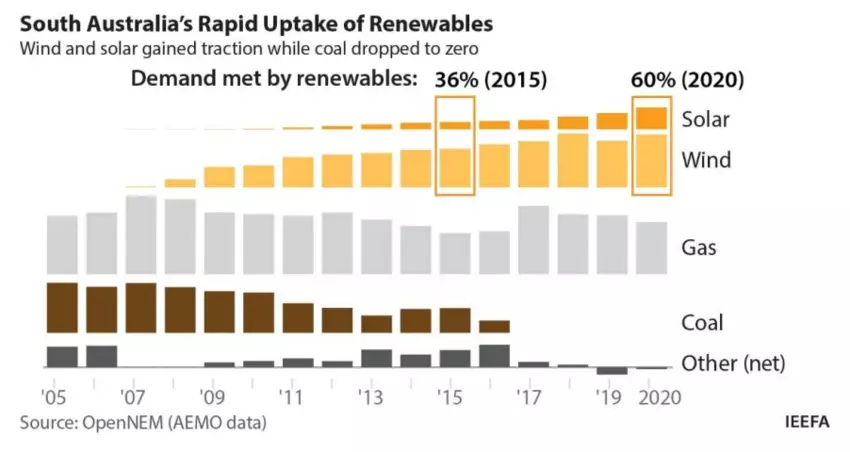 60% of Annual Demand Has Been Provided by Wind and Solar and 100% In Certain Time Periods.

2. Renewables adoption can be driven by government policy and market features.

South Australia is known for its sunshine and reliably strong winds. But having a lot of sun doesn’t automatically mean a lot of solar power. For that, there needs to be the right legislative processes in place.

“Many early projects incentivized by [RET] were installed in South Australia as the market was attractive to investors and developers,” the IEEFA report says.

The South Australian government has set its sights on producing 500% of its energy from renewables by 2050 and becoming a net exporter of greener power.

The neighbouring states of New South Wales and Victoria are among its intended targets, IEEFA says, with additional plans to export “green hydrogen, green steel and other low emissions products internationally”.

Wholesale electricity prices for South Australia were the lowest in the Australian National Electricity Market in the final quarter of 2020. So low that the price of electricity fell to minus-$9 per megawatt hour (MWh) between 10am and 3.30pm during the first quarter of 2021.

Not only has this enabled renewable companies to undercut traditional coal and gas generating businesses, it has “rapidly driven down wholesale electricity spot prices in line with the merit order effect (due to lower-cost electricity being available in the wholesale market), especially in the middle of the day when prices are often negative,” the report says.

“Overall South Australia has met its reliability standard for the past 15 years,” IEEFA says. The only exception was in 2008-09 when “extreme temperatures in Victoria and South Australia reduced the availability of the interconnector between the two states”.

Continuing to maintain supplies will mean having an infrastructure that can accommodate a larger number of generators and the distributed nature of energy resources, the report says.

It cites 253 occasions when the Australian Energy Market Operator had to intervene in the market during 2019-20 (compared to 153 times in 2018-19) to direct “synchronous generators to maintain the system in a secure operating state”.

South Australia has four grid-scale batteries on-stream and two more being built. This includes the world’s largest battery energy storage system, according to IEEFA – the Hornsdale Power Reserve, which was installed in 2017 by Tesla and Neoen.

The report describes the Hornsdale battery as “a technical success, helping to keep the lights on when faults have occurred in the grid”. IEEFA also points out that the site has recouped its capital cost in just over two years of operation.

An estimated 40.3% of households in South Australia have rooftop solar panels. To ensure their safe and effective incorporation into the grid, the ebb and flow of electricity across the distributed network must be carefully managed.

Last year, South Australia introduced a regulation to enable operators to remotely disconnect rooftop solar inverters. This is not an approach favoured by IEEFA, the report points out. Instead, the organization recommends the use of dynamic operating envelopes or DOEs.

“DOEs allow distributed energy resources to import and export within the constraints of distribution networks on a five-minute basis, set 24 hours in advance,” IEEFA says.