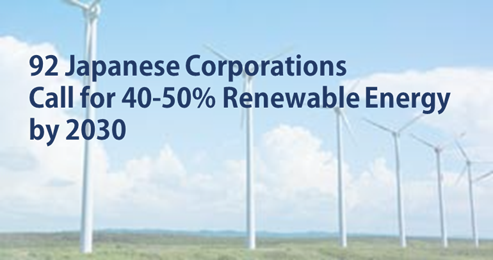 On 18th January, 2021, total of 92 Japan Climate Initiative (JCI) member corporations who support either RE100, SBT, CDP, TCFD released a message calling on the Japanese government to raise its renewable energy share to 40-50% in its 2030 electricity mix.

To meet the goal of being carbon neutral by 2050, EU countries and U.S. states have already set progressive goals to be reached by 2030, in the range of 40-74% in the electricity mix. In contrast, Japan’s current renewable energy target for 2030 is only 22-24%.

This message calling on the Japanese government to raise its 2030 renewable energy target was endorsed by leading Japanese corporations in a wide range of fields, including the electrical, IT, automotive, aviation, shipping, retail, food, housing & construction, pharmaceutical, steel, chemical, glass, insurance & finance sectors. These signatories are demonstrating their clear intent to play “a greater role in the global business environment, where decarbonization is accelerating, and enable Japanese companies more committed to the challenge of mitigating the climate crisis.”

Japan Climate Initiative (JCI) will continue to gather the voices of a wider range of companies, prefectures, municipalities and others, and we will continue our efforts to accelerate the expansion of renewable energy. 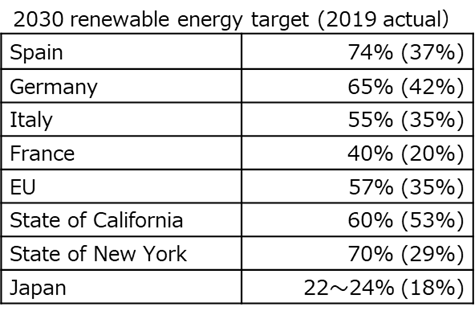 Note) There are differences in the definition of targets and actual values for each country and state (gross generation for Spain, France, EU and Japan, and gross consumption for Germany and Italy). Targets for the states of California and New York are based on Renewable Portfolio Standard (RPS) and actual values are for net generation. The figure of 57% for EU is not the actual target, but the EU’s published estimate. The target figure for Japan covers the fiscal rather than calendar year.

0
previous Canada is set to have one the world's biggest green hydrogen plants
next Uzbekistan to open up electric power, LPG markets amid shortages