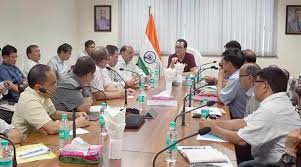 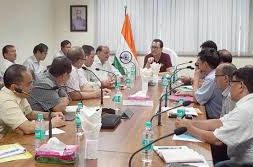 He said that concerted eorts have to be made to draw maximum power from state own hydro power station which will help in renewable energy accreditation and will be benecial to the state.

Mein said that focus of the state government is on all around development of the power sector by harnessing all forms of energy resources with particular emphasis on clean energy.

He stated that improved power scenario, evacuation of power and transmission line project holds immense importance to the state.

He said that concerted eorts have to be made to draw maximum power from state own hydro power station which will help in renewable energy accreditation and will be benecial to the state.

He assured full support for development of hydro-power in the state and called upon the engineers of Power and Hydro-power Departments to work in close coordination so as to optimally harness the hydro potential.

He urged them to work with team spirit and zeal and sought cooperation from the departmental ocers to take forward the developmental works of the department to a newer height during his tenure.

Underscoring the importance of the Kambang Small Hydropower Projects (KSHP), he said that it has to be put to use immediately and directed the ocers concerned to restore the dedicated 33KV line completely within one and half month.

He asked the ocers to prepare estimate with utmost diligence for new and for improvement of works in transmission system reecting the benets in terms of additional Million units from state own hydro projects.

Mein asked the department engineers to submit estimate/DPR with due certication and prioritization after proper scrutiny at Chief Engineer level for onward submission to CE Monitoring for compilation by September 15 this year. He added that the best and resultoriented proposal will be implemented in Phase I for the current year and based on its success, the projection will be made in next year budget reecting the benets achieved in terms of revenue collection, he added.

The engineers of both the department presented the report and status of generation and connectivity, requirement of transmission line of Hydel stations and other various issues of Small Hydropower Projects to the Deputy Chief Minister. Among others, Commissioner Power G.S.Meena, Advisor to Dy CM Capt Anupam Tangu and chief engineers of power and hydropower department were also present.