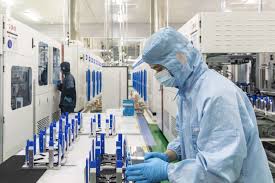 Solar supply chain is punishingly cheap, and Longi dominates it like no one else

Workers in blue jumpsuits and white masks placed clamps around a bar of shiny metal and fed it into a powerful cutting machine. The bar. an ingot made of polysilicon, a heavily refined cousin of the same material that makes up sand. Inside the cutter, it was sliced into thousands of small squares slightly larger than a CD case and thinner than a thumbnail. These wafers would then be shipped on to other factories to be infused with conductive elements such as phosphorous and boron, then wired into cells and assembled into panels—the base unit of solar energy generation. Above, employees manufacture photovoltaic cells on the production line at the Longi Green Energy Technology Co. plant in Xi’an, Shaanxi Province, China.

As of the end of last year it created about 1 of every 4 wafers made anywhere on the planet, and since then it’s announced at least five projects to expand its factories or build new ones.

Despite a pandemic that may slow the growth of new solar power installations for the first time in decades, Longi expects its production capacity by the end of 2020 to have increased by two-thirds compared with 2019. Above , photovoltaic modules stand at a solar power plant co-owned by Longi Green Energy Technology Co. and China Three Gorges Corp. in this aerial photograph taken in Tongchuan, Shaanxi Province…Read More..