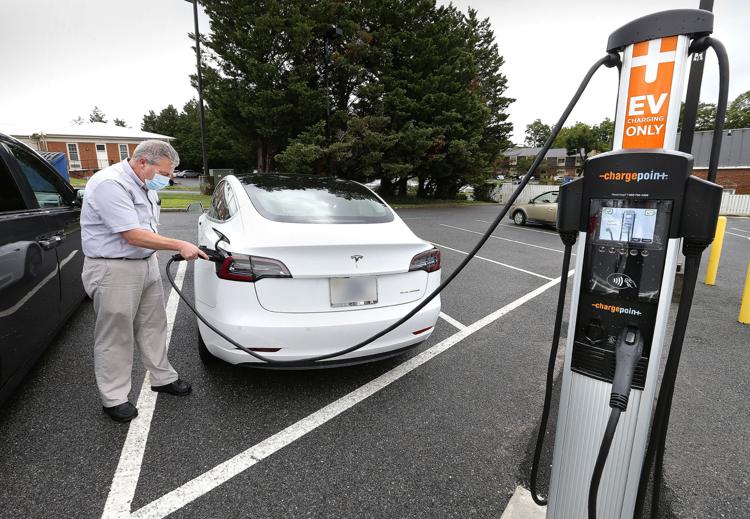 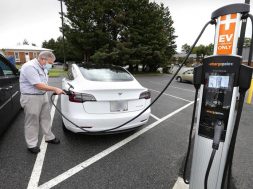 BERRYVILLE : There’s a new filling station in downtown Berryville, and the fuel is being provided for free.

It’s open to the public. Yet owners of vehicles powered by gasoline or diesel fuel can’t take advantage of it.

Bank of Clarke County has installed an electric vehicle charging station in its parking lot off East Main Street, near the county courthouse.

John Hudson, the bank’s executive vice president and chief marketing officer, said the station was installed partly to help an employee with an electric vehicle and partly as a service to the community.

To use the station, go online to chargepoint.com and download an app that enables the station to be unlocked when it’s needed.

The station, which looks much like a gas pump, is able to service two vehicles at a time. Two adjacent parking spaces are available. Hudson said the spaces will be painted in the near future so drivers can find them easily.

He described the station as “a destination charger” that could help either a resident or out-of-towner visiting downtown.

For instance, if someone is eating at a restaurant, “you can be charging your car while you’re having lunch and then be on your way,” he said.

Charging an electric car is not like filling up at a gas station. It takes more than just a few minutes — a lot more.

According to information online, it can take anywhere from 30 minutes to 12 hours to fully charge a car, depending on the charging station’s speed and the size of the car’s battery.

An online map shows two other electric vehicle charging stations in Clarke County. One is at a business in Bluemont, and another is at a restaurant on Lord Fairfax Highway south of Boyce. Apparently the bank’s station is the only one in Berryville.

In 2018, electric vehicle manufacturer Tesla awarded Berryville a grant to install charging stations at two locations. But last year, the town pulled the plug on that effort, citing problems with an electricity supply at one location and cost factors for providing the power to vehicle owners.

The bank is paying for the electricity its station will provide to motorists, Hudson said.

So far, the station hasn’t been used much. He expects it to be used more as word about it spreads. “It’s just starting to get around,” he said.

According to Hudson, the station has become part of Bank of Clarke County’s initiative to encourage people — including customers — to adopt practices that are environmentally friendly. An example he mentioned is having monthly statements sent online rather than through the mail, which saves on paper.