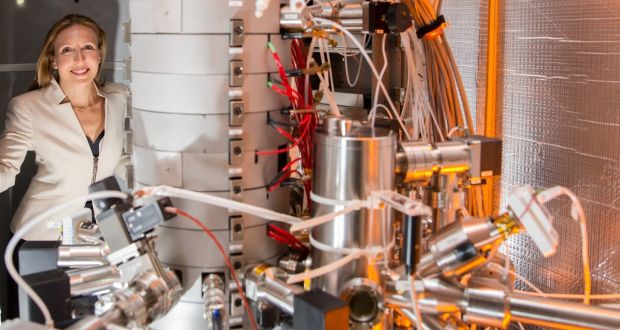 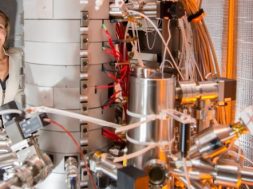 Battery low and yet miles to go. It’s a pain for consumers and a challenge for manufacturers: how do you make a battery that can store more charge and deliver power for longer so that devices from smartphones to electric cars can last the increasing time and distance we demand between charges?

Researchers at Trinity College Dublin have found that incorporating a type of ultra-thin nanomaterial into the structure of a battery’s electrode could triple the storage capacity compared to a conventional battery, and their hope is that the technology can be easily incorporated into battery manufacture. The findings are published today in Nature Communications.

“The main problem with batteries is that we want to get them to store more energy so we can use them for longer between charges,” says Prof Valeria Nicolosi, professor of nanomaterials and advanced microscopy at the school of chemistry and an investigator at AMBER, the Science Foundation Ireland research centre for advanced materials and bio-engineering.

She notes that one of the key issues lies in the electrodes of conventional batteries.

“In a rechargeable lithium-ion battery you have electrodes where the charge is stored, and in order to store more charge we need to make these electrodes thicker. But these electrodes can only be manufactured to a certain thickness. There is a threshold beyond which if we make the electrode too thick it starts cracking and the battery fails.”

Nicolosi’s expertise lies in the field of ultra-thin or 2D materials, and with colleagues in Trinity and Drexel University in Philadelphia, she has explored how they might enable thicker battery electrodes. The researchers looked at a class of ultra-thin nanomaterial called MXenes, ultra-thin sheets that are mechanically very strong and can conduct electricity effectively.

“A lot of people have heard of the ultra-thin carbon material graphene, and we do work a lot with graphene in our lab, but for this application we looked at MXenes,” says Nicolosi. “We used strong acids to etch sheets of MXenes from parent crystals to form an ink of these nanomaterials, and we mixed these atom-thick sheets with silicon because it is a material used in battery electrodes.”

When the researchers used MXenes and silicon to make anodes for small coin-size batteries, they found they could build relatively thick electrodes that were also mechanically robust.

“We managed to go to very high thickness,” says Nicolosi. “And because the MXenes are very strong the electrodes didn’t crack. So we overcame a fundamental problem in conventional battery manufacture.”

She says in the lab the experimenters were able to build small, coin-size batteries with up to three times the storage capacity of a similar-sized conventional battery, crediting the choice and quality of the nanomaterial for the performance.

“The MXenes form beautiful big sheets and these form a network that can conduct electricity and at the same time provide mechanical stability. We knew these materials could perform well in other applications, so we wanted to see if they could be used here.”

Nicolosi adds that the approach they took in the lab could be easily adopted in the manufacturing industry. “Because we used the methods that manufacturers use to make conventional batteries, this technology is readily available. Manufacturers don’t need new machines to do this, they could just take the recipe and build it in.”

But don’t expect MXene-enriched batteries to be powering your devices for three times longer for a while yet – the research needs to explore ways of increasing the overall performance of batteries, says Nicolosi.

“We have shown we can store three times as much charge but there are many things to improve. We need to find ways to increase the overall lifetime of the batteries so they would not have to be replaced as often, and we want to cut the length of time needed to charge the batteries.”

Nicolosi’s lab, which receives funding from Science Foundation Ireland and the European Research Council, is continuing to explore other nanomaterial technologies for delivering power to electronic devices. “In research there is always more to look at, more to explore. We never stop.”

The weird world of 2D materials

Ultra-thin materials live up to their name, and of the so-called 2D materials, just an atom thick, probably the best known is graphene. Isolated by a team at the University of Manchester in the mid-2000s by effectively peeling atom-thick layers from graphite (pencil lead) with adhesive tape, graphene attracted interest due to its strength, transparency and ability to conduct electricity, and it was the subject of a Nobel Prize in chemistry just a few years later in 2010.

Graphene, in which the atoms of carbon are arranged in hexagons (think of a chicken-wire fence), has potentially disruptive applications in sectors such as transport, medicine and electronics, and Manchester continues to be a hotspot for its research and development.

Graphene is the “father of 2D materials”, but there are also many others, says Prof Nicolosi, who has worked with a range of ultra-thin materials to explore whether and how they could make energy storage and battery operation more efficient. “These materials have unusual and useful properties, and we are figuring out how to harness them.”

Getting to grips with such thin materials in the lab requires ingenuity. Nicolosi and colleagues, including Prof Jonathan Coleman, have developed a method to “exfoliate” layers of graphene from the 3D graphite in part using a kitchen blender and some detergent.

Nicolosi continues to use this “blender” method in her work to generate 2D materials, but some, such as the MXenes she uses to build electrodes in batteries, need to be etched from crystals using strong acids rather than sheared off. Then, to make sure everything is in order, the ultra-thin flakes and sheets need to be closely examined using a electron microscopy.

“I call this world of 2D materials the ‘flatlands’,” she says. “They have a large surface area compared to their volume, and if we learn about the properties of these materials and apply them in the appropriate way, we can potentially make devices and batteries more efficient. This is what I would like to see translating from the research.” 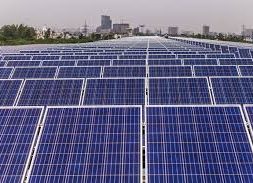