Oil majors increasingly are trying their hand at being alternative-energy minors.

Royal Dutch Shell Plc, which traces its roots back to the late 19th century, just bought Greenlots Global, a California software company serving the electric-vehicle charging sector. This follows other deals by Shell — along with the likes of BP Plc, Chevron Corp. and Total SA — to invest in renewable energy, retail power, batteries and other non-fossil fuel businesses.

For now, though, this is still pinky-toe dipping. Shell’s plan to invest $1-2 billion a year on “new energy” opportunities is a hefty check, but less than 10 percent of its capital expenditure budget. Besides anything else, there’s a straightforward reason for taking it slow: returns.

Oil majors have a testy relationship with investors these days. Shell’s stock is one of the better performers, but mainly because it has embraced a strategy centered on payouts: Its dividend yield scrapes 6 percent. A decade of high spending trashed return on capital across the industry.

Uncertainty around long-term oil and gas demand has compounded the erosion of trust when it comes to the majors’ spending plans. In a recent survey of institutional investors, the Oxford Institute for Energy Studies found hurdle rates required for new conventional oil projects have risen appreciably compared with historical rates of return, as investors price in risks around the energy transition. 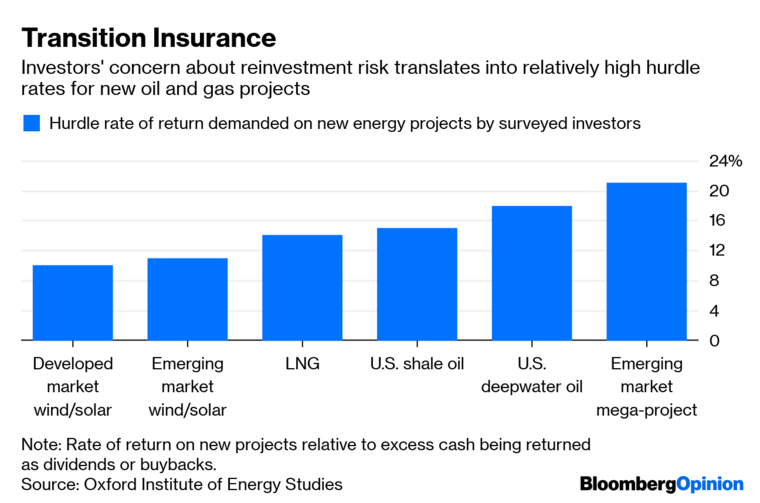 In this context, alternative-energy investments can be justified on one level. A solar farm in the southwestern U.S. is a relatively low-risk project for a more risk-averse crowd. But they also raise a conundrum, especially if eventually done at a meaningful scale. As the chart suggests, investments in power-related infrastructure provide fundamentally different returns from what oil majors have have offered historically. These companies have been built to take world-scale risks in the hope of generating high returns to match that.

French oil major Total provides a useful example here, because it has made some of the biggest investments in alternative energy businesses and, as a result, has come closest to actually splitting this business line out in its accounts. The “Gas, Renewables & Power,” or GPR, segment includes downstream natural gas activities, but it offers some insight to how these businesses compare with Total’s traditional operations: 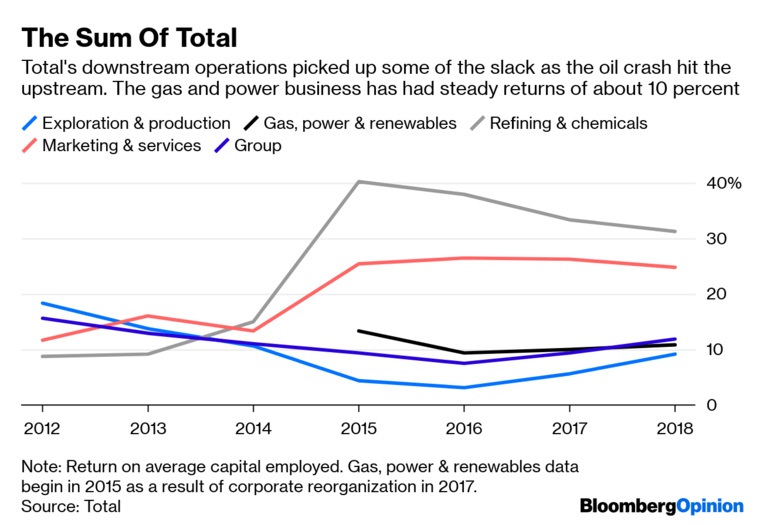 While that chart shows what’s happened to returns, it doesn’t show relative scale. This chart shows average capital employed for each of Total’s divisions in 2015, when data for the GPR division begin, and 2018. 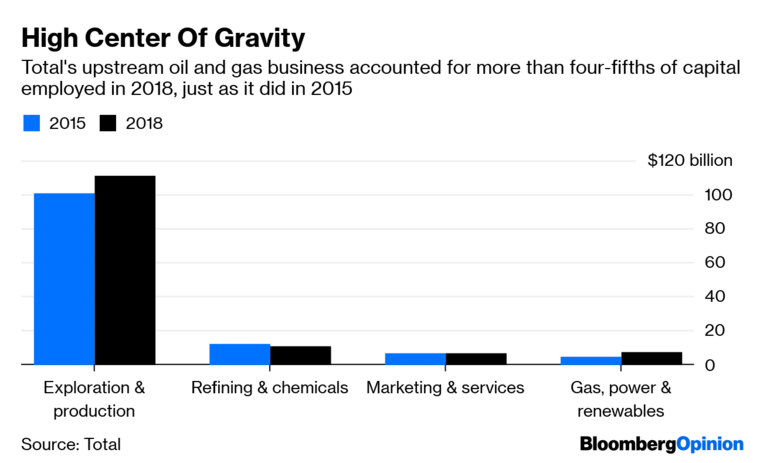 It’s hard to see there, but capital employed in the GPR business has risen by 18 percent a year, compounded, since 2015. In absolute-dollar terms, though, the upstream division has expanded by almost four times as much. The upshot is that a one-percentage-point improvement in return on average capital employed in the exploration and production business translates to $1.1 billion of adjusted operating income for Total — almost 16 times what a one-point improvement in the GPR business’ return would generate.

What complicates this further is the commodity cycle. Even if an oil major’s leadership has taken the view that oil demand is nearing a plateau, that doesn’t mean oil-price cycles are dead. And that can make a huge difference to returns in the traditional upstream and downstream bits of an integrated oil company. To get a sense of that, here is the annual change in adjusted operating profit by business line for Total over the past three years: 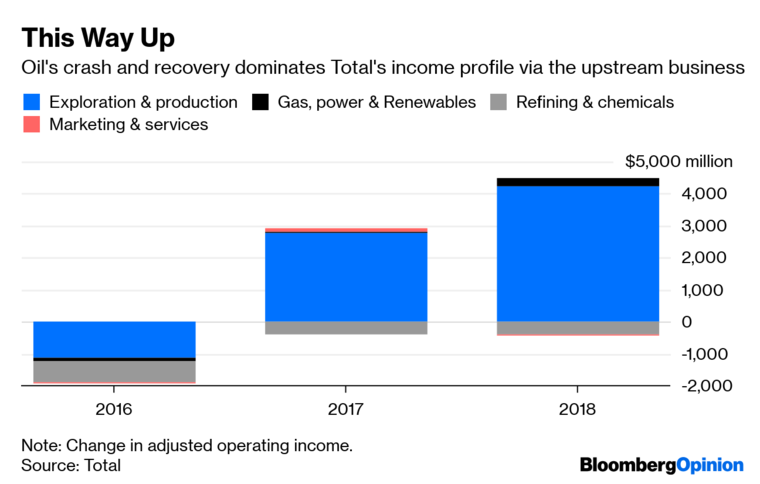 This may seem like a truism: Bigger divisions move the needle more. But this will continue to matter as oil majors discuss capital allocation with shareholders, who may well prefer to make their own decisions about allocating excess oil rents to new ventures rather than leave it to an oil CEO. Managers in dominant upstream divisions enjoying a commodity upswing may chafe at seeing budgets allocated to businesses that are ultimately antithetical to oil, even if they do fall under the rubric of “Big Energy.”

It can be argued that alternative-energy businesses may not necessarily provide the thrills of cyclical upswings, but they do generate steady returns. Certainly, renewable-power projects seem to do so. But these are still early days. John Abbott, who runs Shell’s downstream business and was in San Francisco last week for Bloomberg NEF’s summit on the future of mobility, told me and the audience quite candidly, “The reality is, in some of these value chains that we’ve been talking about, we don’t know exactly where the rent will sit.”

Hence, Shell is taking an integrated approach to power, electric-vehicle charging and the like, similar to its existing model in oil and gas, aimed at capturing margins on several levels. One critical question concerns whether or not value will move up and down the electrified value chain, the way it does with oil and gas. I think this will be less the case, with value tending to accrue at the customer-facing level, given that deflation in power generation is one of the primary drivers of greater electrification in the first place.

Proponents of oil majors pivoting to a brave new world can point to examples such as Ørsted ASA, the Danish oil and gas company that became an offshore wind-power giant. Two caveats, however: First, Ørsted’s target for annual return on capital employed through 2025 is 10 percent — about what you would expect for this sort of company but not an oil major. Second, getting investors comfortable with such a transformation is definitely a lot easier when you’re 50 percent-owned by the Kingdom of Denmark. For everyone else, the battle royal over what that incremental dollar goes toward — old energy, new energy, shareholders — is just getting going. This column does not necessarily reflect the opinion of the editorial board or Bloomberg LP and its owners.