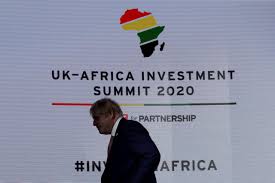 LONDON : UK government-owned finance agency the CDC Group has signed $400 million worth of African investment deals, part of a wider drive by Britain to develop new trade ties as it prepares to leave the European Union.

CDC announced the new deals on Monday as Prime Minister Boris Johnson called for deeper links between Britain and Africa at a London summit with 21 African countries.

Britain, a former colonial power in Africa, is trying to seize new global trading opportunities after it exits the EU on Jan. 31, but faces strong competition on the continent from rivals such as Russia and China.

The CDC Group, which says it is the largest bilateral development investor in Africa, said the bulk of the funds were going to regional African banks, so that they can lend to entrepreneurs and small and medium-sized firms.

The deals included a $100 million trade finance loan with South African lender Absa (ABSPp.J) to support SMEs in southern Africa, as well as a memorandum of understanding for $100 million to Egypt’s largest bank CIB (COMI.CA) for SMEs and microfinance.

Investments in solar and renewable energy projects were also on the list. In total, the CDC Group plans deals worth over $2.5 billion in Africa in the next two years. “The commitments we have announced today will accelerate the roll-out of solar power and other renewable technologies and support the growth of countless SMEs – the bedrock of any healthy economy – across the continent,” said Nick O’Donohoe, chief executive of CDC.

CDC said it is responsible for over 10% of all capital invested through Africa-focused private equity funds.