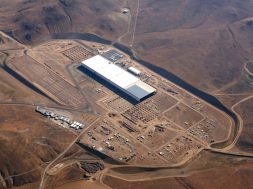 The Chinese government claims a new technological breakthrough pushes lithium production prices to a record low, which could have a big effect on electric car battery costs.

A Chinese government report claims the new process has made the cost of extracting lithium 15,000 yuan (US $2,180) per ton. That’s a huge dropoff from standard international prices for lithium, which often range from $12,000 to $20,000 per ton.

Reports last year saw prices in China hit the low end of that spectrum, but $2,000/ton would be a whole new ballpark.

As the South China Morning Post reports, though precise costs of lithium production are “a closely guarded business secret,” industry insiders confirmed this new rate would be one of the lowest rates known — if not the lowest.

China produces about two-thirds of all lithium-ion batteries and controls most of the world’s lithium processing facilities. That’s why the US is discussing legislation that would aid in the domestic mining of lithium and other materials that could be used in electric cars.

US Mining
That legislation — the American Mineral Security Act — appeared to take another important step forward during a hearing on Tuesday. According to Reuters, the hearing found “senators voicing bipartisan support for” the legislation, which aims to create a national electric vehicle supply chain policy.

The act would “require a tally of metal reserves in the United States and seek to streamline permitting for the EV sector.” US senator Lisa Murkowski, R-Alaska, a co-sponsor of the bill, said,

“We are not doing ourselves any favors when we don’t know what we have in our inventory. I suspect we have more than we even think we do.”

China looms large in the Reuters report, as both politicians and analysts alike have been adamant in stressing the importance of China’s vast lead in electric vehicle materials.

The US really doesn’t know how many relevant minerals it has in this regard. Current estimates rely on corporate reports and historical data. According to the US Geological Survey, the country has 35,000 tonnes of lithium in reserve, which many see as a conservative figure.

Albemarle Corp operates the only lithium mine in the US — said to be capable of producing 6,000 tonnes annually — though more projects are in development.

Electrek’s Take
There are a lot of moving parts here involving supply chains, possible mineral shortages, and more, but a legitimate breakthrough in lithium production would make an impact. Keep in mind, though, that lithium only represents a small percentage of the cost and volume of li-ion battery cells, so that impact could be somewhat limited.

The US is now apparently racing to find out what kind of mineral reserves it has, and if the American Mineral Security Act’s bipartisan support is as strong as indicated, it might become law in the near future.