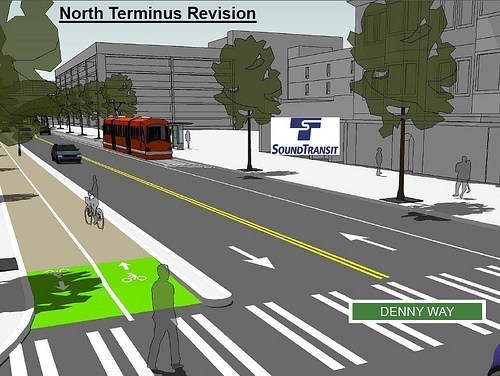 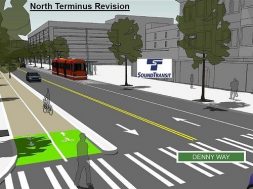 Leave it to Seattle City Hall to somehow pit proponents of electric vehicles against bicycling advocates. But a plan for a new charging station to be installed on Broadway near Capitol Hill Station has sparked a debate over the street and the city’s competing priorities for how to best put the right of way to use.

An open house originally scheduled for February but postponed by the snow will take place next week at Seattle Central to discuss a Seattle City Light plan to install two direct current (DC) fast chargers capable of powering most electric vehicles in front of the Capitol Hill Station mixed-use developments under construction at Broadway and E Denny Way.

While the city-owned chargers would power a typical car for “approximately 80+ miles of range in 30 minutes” at reasonable rate of 43 cents per kilowatt-hour, transit advocates who hope for future extension north of E Denny Way for the Broadway bikeway have noticed the station would be directly in the path. Seattle City Light says be flexible.

“In the absence of a bike lane currently, we believe this is a great location for an electric vehicle charging station,” Scott Thomsen, spokesperson for City Light tells CHS. “Should there come a time, we will be able to move our infrastructure.”

The Seattle Department of Transportation describes the situation a little differently.

“In the meantime, while the curbspace is currently being used for parking and loading, supporting low emission vehicles aligns with Seattle’s efforts to fight greenhouse gases,” the spokesperson added.

After $3 million worth of planning, SDOT and the mayor’s office iced plans for a two-stop extension of the First Hill Streetcar north on Broadway to Roy — and the street and safety improvements that would have come along with it including a longer Broadway bikeway.

The extension plan would have included the removal of another handful of left turns on Broadway, removal or reduction of parking to extend the protected bikeway north to around Roy, intersections marked using skipped green paint, and new bike traffic signals. Plans also included new designs for the transit stops along Broadway with access at-grade from a raised crosswalk. The bikeway was planned to come up to sidewalk level at the crosswalk, encouraging people biking to slow down and giving clear priority to people on foot. You can check out the block by block plans for Broadway’s streetscape changes here.

Including the streetcar elements, the iced plan had a $28 million price tag with talk of a possible local improvement district to help pay for it. That talk went nowhere, a major grant was handed back, and the streetcar plans were shelved even as the unexecuted improvements remain part of Seattle’s bike planning.

SDOT tells CHS the charging station is being reviewed in relation to the city’s Bike Master Planand “associated implementation plan” as part of the city’s “reassessment” of the voter-approved 2015 Levy to Move Seattle.

“At this time, a Broadway PBL extension is not scheduled for consideration before the levy expires in 2024,” the spokesperson says.

The new City Light chargers are part of the city’s Drive Clean Seattle Initiative, which aims to reduce carbon emissions. 65% of Seattle’s emissions come from transportation, city officials say. 18 new chargers were planned to join a set installed in the Beacon Hill neighborhood to begin the year. Mayor Jenny Durkan’s $2.2 million goal had been to have 20 in place before the end of 2018.

In 2011, CHS looked at the novel at the time proliferation of permits for installations of chargers at private homes and apartment buildings. The planned public Broadway chargers join a free market rush to also provide charging services with installations in the city’s right of way already in place and applied for across Seattle.

A proposal from the company Greenlots for a privately installed charging station in the public right of way nearby on E Olive Way at Broadway was denied by officials in July citing the plans for the city-owned charging station.

“It’s really clear that the major auto manufacturers are making a shift,” City Light’s Thomsen said. “You are going to see more and more of these vehicles on the street.”

At a Capitol Hill community meeting last October where the city’s plan was presented, attendees pushed back on adding more chaos to Broadway and suggested 12th Ave might be a better home for the city’s Capitol Hill charging station.

McCaela Daffern, sustainability and planning manager for Capitol Hill Housing, said the organization’s Capitol Hill EcoDistrict is “supportive of electric vehicles and the infrastructure needed to support electric vehicle charging, but not if siting creates unsafe conditions for pedestrians, cyclists, and drivers and prevents implementation of future safety improvements.”

“We believe these challenges can be overcome and EV infrastructure and bike lanes can coexist with smart and thoughtful planning,” she writes, and said they are taking City Light “at their word that the placement of a curbside EV charging station on Broadway will not prevent further extension of the Broadway protected bike lane.”