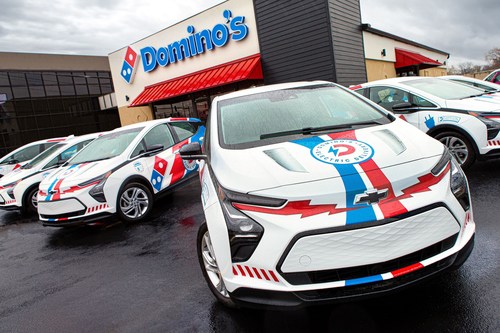 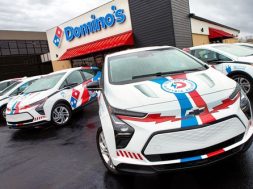 ANN ARBOR, Mich. : Domino’s Pizza Inc. (NYSE:DPZ), the largest pizza company in the world, is electrifying pizza delivery! More than 100 custom-branded 2023 Chevy Bolt electric vehicles are arriving at select franchise and corporate stores throughout the U.S. this month, with an additional 700 rolling out in the coming months, making it the largest electric pizza delivery fleet in the country. To see an interactive map of how many Domino’s Chevy Bolt EVs are currently in each state and how many are coming soon, visit dominos.com/evfleet.

“Domino’s launched pizza delivery in 1960 with a Volkswagen Beetle, rolled out the DXP® – a custom-built pizza delivery vehicle – in 2015, tested autonomous pizza delivery with cars and robots, and is now leading the charge in the future of pizza delivery,” said Russell Weiner, Domino’s chief executive officer. “Domino’s has always been on the cutting edge of pizza delivery and electric delivery cars make sense as vehicle technology continues to evolve. We’ve made a commitment to net-zero carbon emissions by 2050, and this is one way we can begin reducing our environmental impact, one delivery at a time.”

Electric vehicles provide several advantages for Domino’s stores, including ample battery life with the potential to have days of deliveries, zero tailpipe emissions, advanced safety features and lower average maintenance costs than nonelectric vehicles – all without the financial impact of high gas prices. Electric fleet vehicles also provide more opportunity to attract delivery drivers who don’t have a car of their own. Today, Domino’s already delivers with electric bikes and/or scooters in 24 international markets, including the U.S.

“We’re excited that Domino’s has chosen the Chevrolet Bolt EV to build their electric pizza delivery fleet in the U.S.,” said Ed Peper, vice president of GM Fleet. “Both companies are committed to bettering our environment. GM plans to eliminate tailpipe emissions from new U.S. light duty vehicles by 2035. With an affordable price, fun driving characteristics, and a 259-mile range, the Chevy Bolt EV is the future of Domino’s electrified deliveries.”

Interested in joining in on the EV fun? Domino’s is launching two giveaways, giving customers the chance to win one of two 2023 Chevy Bolt EVs. To enter each giveaway:

Founded in 1960, Domino’s Pizza is the largest pizza company in the world, with a significant business in both delivery and carryout pizza. It ranks among the world’s top public restaurant brands with a global enterprise of more than 19,500 stores in over 90 markets. Domino’s had global retail sales of nearly $17.8 billion in 2021, with over $8.6 billion in the U.S. and over $9.1 billion internationally. In the third quarter of 2022, Domino’s had global retail sales of over $4.0 billion, with over $2.0 billion in the U.S. and nearly $2.0 billion internationally. Its system is comprised of independent franchise owners who accounted for 98% of Domino’s global stores as of the end of the third quarter of 2022. Emphasis on technology innovation helped Domino’s achieve more than half of all global retail sales in 2021 from digital channels. In the U.S., Domino’s generated more than 75% of U.S. retail sales in 2021 via digital channels and has developed several innovative ordering platforms, including those for Google Home, Facebook Messenger, Apple Watch, Amazon Echo, Twitter and more.