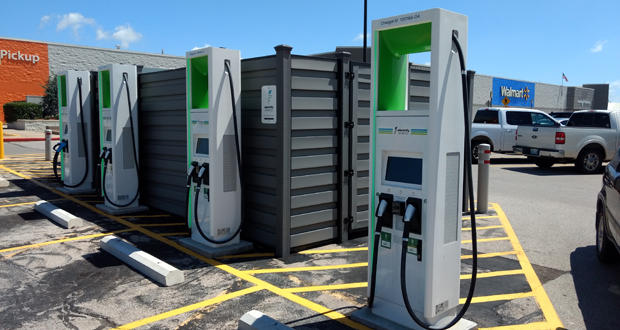 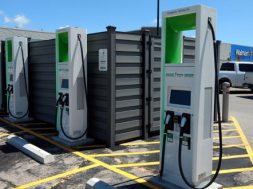 More electric vehicle charging stations are coming to Oklahoma. In this episode of the Business Intelligence Report, Journal Record editor Russell Ray discusses how this comes at a time of increased interest in electric vehicles and charging infrastructure across the state.

Katelyn Howard: This is the Business Intelligence Report, a weekly conversation about business news in Oklahoma. I’m Katelyn Howard, and with me is Journal Record editor Russell Ray. In recent years, more and more electric cars can be spotted on roads across the country, and Oklahoma is no exception. Walmart recently announced that it will be adding electric vehicle charging stations to five of its locations in the state as part of a partnership with Electrify America, a subsidiary of Volkswagen Group of America. Your intern Christian Tabak writes that this is aimed at expanding alternative fuel routes. Can you tell us more about this?

Russell Ray: Sure. The use and interest in pure electric vehicles is growing, even in oil and gas states like Oklahoma. Walmart recognizes this and is installing these charging stations at Walmart Supercenters in Ardmore, Bristow, Moore, Vinita and Weatherford. These chargers from Electrify America are designed to recharge an EV pretty quickly. For each minute of charging time, another 20 miles will be added to the EV.

Ray: That’s right. A large number of EV charging stations in the U.S. are on the East and West coasts and in major urban areas. By adding charging stations to Walmart locations in rural areas, EV owners now have other routes to choose from. In many cases, the options are limited. This move by Walmart, some say, will improve the ability of EV users to travel cross country without too much difficulty.

Howard: Vehicles that burn petroleum-based fuels create nitrous oxide, which can form smog when combined with other chemicals in the atmosphere. Aside from the environmental aspects of reducing fossil fuel use, what are some other reasons that people might be switching to electric vehicles?

Ray: Well, the fuel and maintenance costs can be 70 to 80% lower versus a traditional combustion engine. They don’t need oil changes, transmission fluid and other upkeep conventional cars need, but their batteries do need to be recharged, and at some point, the batteries must be replaced, which can be expensive. And the price of EVs vary from being extremely expensive to being more affordable than some conventional vehicles.

Howard: While the amount of electric vehicles in Oklahoma still lags behind other states, these charging stations come at a time of increased interest in EV’s and charging infrastructure in the state. As of April of this year, the U.S. Department of Energy recorded that Oklahoma has a total of 1,380 registered electric vehicles.

Ray: That’s right. The Department of Environmental Quality announced last year it would be accepting proposals for the installation of EV charging stations across the state as part of its ChargeOK grant program. Funded with $3.1 million from the Volkswagen State Environmental Trust, the program will reimburse up to 80% of the cost for charging station projects.

Howard: Chief operating officer of Electrify America Brendan Jones says that the company will continue working with Walmart, but what additional steps does Electrify America plan to take to encourage the use of electric vehicles?

Ray: Well, Electrify America has said it will invest $2 billion in EV infrastructure and education over the next 10 years, with a plan to deploy more than 2,000 chargers at 484 sites across 17 metro and highway locations.

Howard: Russell Ray is editor of The Journal Record. Thanks for joining me today, Russell.

Ray: My pleasure, Katelyn. Thank you.

The Business Intelligence Report is a collaborative news project between KGOU and The Journal Record.

As a community-supported news organization, KGOU relies on contributions from readers and listeners to fulfill its mission of public service to Oklahoma and beyond. Donate online, or by contacting our Membership department. 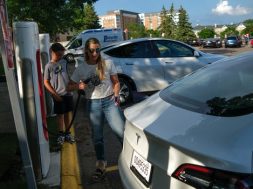