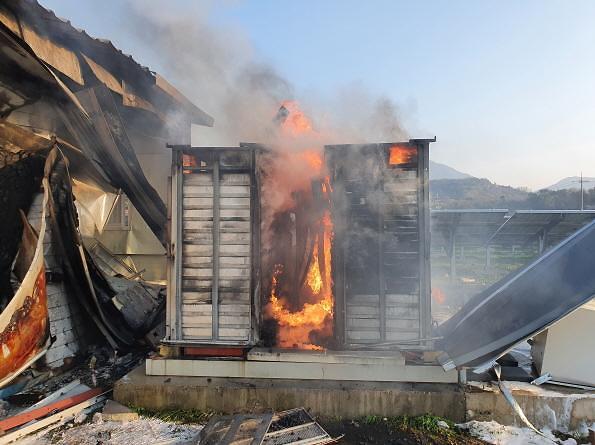 SEOUL : A fire at a private solar power plant gutted an energy storage system (ESS) that used batteries from LG Energy Solution affiliated with South Korea’s LG Group, which has tried to find new business opportunities in the ESS market.

Financial losses caused by the fire in Hongseong some 120 kilometers (74 miles) southwest of Seoul were estimated at about 440 million won ($393,384).

An energy storage system (ESS) is a power storage system that consists of batteries or specially designed battery packs. ESSs are normally connected to solar power plants, micro-hydropower plants and wind farms to collect energy. Stored electricity can be sold back to state power companies or used locally through an electricity grid system.

The fire department in South Chungcheong Province said that an ESS linked to a private energy power plant caught fire on April 6 and gutted about 140 batteries, the plant’s structural frame and seven power generator modules. The blaze was put under control in about four hours.

In their initial judgment, firefighters said the fire may have started inside the ESS. Firefighters and police have launched a joint investigation to find the exact cause of the fire. South Korea has more than 1,400 ESS facilities operated by private and state power companies as of 2019. A government-led investigation team has discovered faulty batteries in some fire cases at ESS facilities.

LG Group aims to nurture its battery-making wing as a leading player in the global battery market. In response to U.S. President Joe Biden’s Green New Deal initiative that would bring big changes to electric vehicle and ESS markets, LG Energy Solution has promised to establish various types of supply chains with customers.