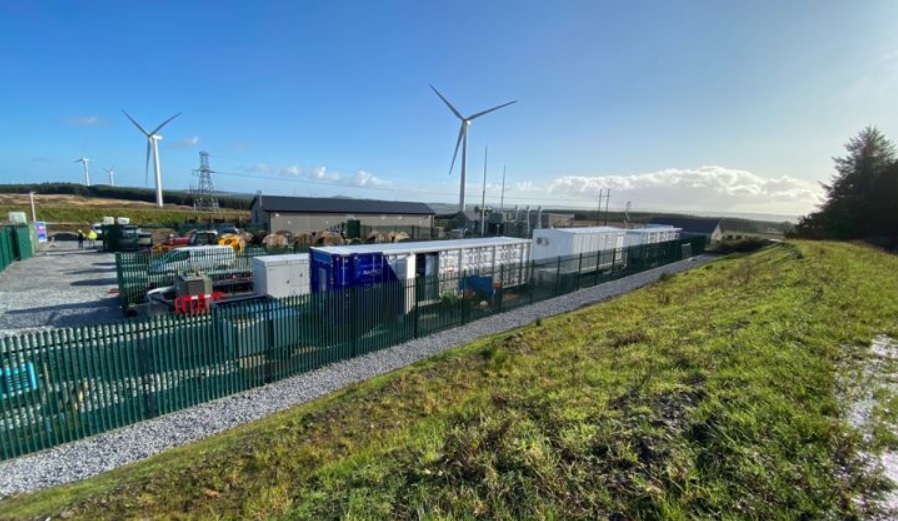 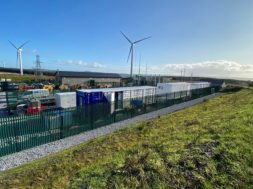 The Fluence-supplied battery system will make money via a new product that rewards high-speed frequency response.

The Republic of Ireland recently received its first grid-scale battery, which will help manage volatility as the island nation ramps up renewable power plants.

Developer Statkraft and battery supplier Fluence announced Wednesday that the battery had been installed in County Kerry and will enter commercial operation a few weeks after commissioning. The Kilathmoy battery packs 11 megawatts/5.5 megawatt-hours and sits alongside a 23-megawatt wind farm.

The purpose of the battery is not to store bulk wind generation, however; it’s to respond instantly to the electrical frequency fluctuations that result from increasing amounts of intermittent power generation.

Ireland is working toward a goal of 40 percent renewable power in 2020 and 70 percent by 2030; it was already generating 30 percent of its power from renewables in 2017, according to the Sustainable Energy Authority of Ireland. Most of that comes from wind power. As aging fossil plants retire and more wind plants take their place, the isolated grid will have to balance increasingly large swings in instantaneous power.

Since Ireland has relatively limited access to other grid networks, it’s had to proactively prepare for the renewable surge. It did so by creating a suite of grid stability products under a program known as Delivering a Secure Sustainable Electricity System, or DS3. That package includes five frequency regulation products, which compensate actions geared to keep the grid’s frequency in balance from moment to moment.

The payments scale up based on speed of response, so frequency delivered within 2 seconds earns more than deliveries in 5 minutes, and the most lucrative response happens within 150 milliseconds. Fluence designed the Kilathmoy system to hit that 150-millisecond threshold, said Marek Kubik, market director for the U.K. and Ireland.

The products are designed in a technology-neutral manner, Kubik said. However, “They happen to be well set up for batteries.”

Thermal plants need several minutes to ramp up in response to a signal, so they cannot respond quickly enough to provide the fastest service. Sub-second response times are typical for lithium-ion systems, Kubik noted, but a 150-millisecond response time is unusually fast, even for batteries.

“Where there’s a premium on it, it’s something we can structure, but it’s not something we’d put in every system,” he said. “In this specific case, there is value assigned to it.”

The fast frequency response market is not a high-risk merchant play in Ireland as it is in some geographies. Plants can bid for six-year contracts in a competitive auction or earn a fixed tariff that pays a set rate for meeting various obligations. The first auction winners need to be online by the close of 2021; Kilathmoy will earn via the tariff.

There is a risk, then, that battery developers saturate the market and prompt a downward revision of the tariff. Something similar happened in the U.S. when a change in compensation rules chilled the fast frequency market in PJM that first kicked off grid battery development.

On the other hand, Statkraft has first-mover advantage with this plant, and grid volatility is only going to increase as more wind comes online. The tariffs could even become more valuable over time, if the need for fast frequency outstrips what capacity industry provides.

This was not Fluence’s first project on the island: The company supplied a 10-megawatt battery at Kilroot in Northern Ireland, which has been operating for nearly five years.