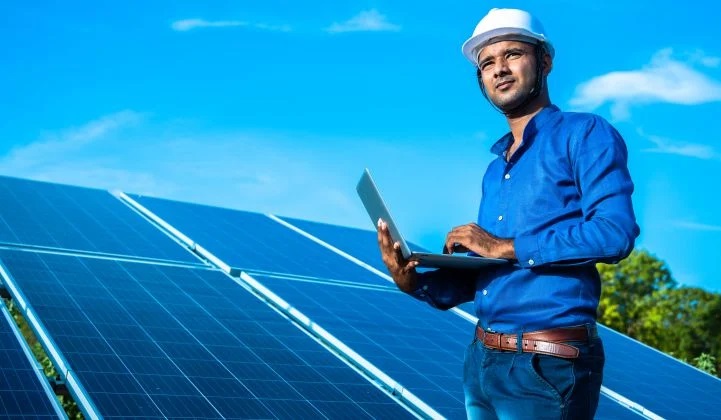 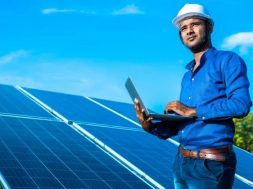 Last March, the Indian government implemented one of the most stringent coronavirus lockdowns in the world. With just a few hours’ notice, all 1.3 billion people in the country were ordered to stay at home for several weeks. Ongoing restrictions to limit the spread of the virus crippled economic activity. Businesses closed. Workers fled from cities. And India’s clean energy transition was put on pause.

Looking back, however, 2020 proved to be a decisive year for clean energy in India.

Bids for new solar projects hit record lows last year, affirming that coal is no longer the cheapest source of electricity. The country awarded landmark supply contracts for flexible renewable power, an important step in addressing the limitations of intermittent wind and solar. Cheap renewables were favored on the grid last year, which caused coal use to fall as energy demand plummeted amid the economic slowdown. Stimulus measures for utilities, an extension to project commissioning deadlines, and domestic solar manufacturing initiatives also helped to bolster the outlook for renewables.

But while the renewable energy industry endured a turbulent 2020, coal remains the dominant player in India’s electricity mix. With power demand expected to triple by 2040 as India’s population continues to achieve upward mobility, fossil fuels are poised to see continued growth even as the clean energy market thrives.

Two burning questions for India — and the world — are how fast the use of renewables and related clean energy technologies can scale, and to what extent can they mitigate the increase in fossil fuel use. As the second-largest coal-producing and -consuming country on earth and the third-largest emitter of greenhouse gases, India’s transition from carbon-intensive resources is a critical front in the global climate change fight.

Challenges lie ahead, but there may be cause for optimism. As the country grapples with the intertwined issues of air pollution, water scarcity and energy security, along with energy access and affordability, experts say they’re starting to see a future for India where coal will no longer be king.

“Despite the pandemic, there has been a slew of challenges for coal mining and generation, and the government is becoming clearer that energy transition is on track even as the economic recovery continues to take shape,” said Aarti Khosla, founder and director of Climate Trends, a Delhi-based strategic communications initiative, and former communication lead for WWF India.

Modi: India on track to “exceed” its renewable targets

Speaking at the United Nations Climate Ambition Summit in mid-December, Prime Minister Narendra Modi declared that India is on track to reach, and ultimately exceed, its ambitious renewable energy targets.

“India has reduced its emission intensity by 21 percent over 2005 levels,” he said at the virtual event, which marked five years since the adoption of the Paris Agreement on Climate Change. “Our renewable energy capacity is the fourth largest in the world. It will reach 175 gigawatts before 2022.”

“India is not only on track to achieve Paris targets but to exceed them beyond your expectations,” Modi said at the climate summit last month.

While leadership reaffirmed the country’s lofty goals, the pace of renewable energy deployment in India slowed significantly in 2020. Solar installations in the first nine months of the year totaled 1.73 gigawatts, marking a 68 percent decline from the same period in 2019, according to Mercom India Research. Wind installations also fell dramatically.

One key action the Modi government took to bolster clean energy in 2020 was to grant wind and solar projects “must-run” status, which means that their power cannot be curtailed except in conditions that would compromise grid stability. Renewables were insulated from the decline in electricity demand as a result, while coal plants took a major hit. In addition to granting renewables must-run status through the pandemic, the government launched multiple tenders for new renewable energy projects to meet India’s future energy demand. Not only did the auctions continue but the country also saw a series of record-low solar bids.

These recent historic bids are 15 percent lower than the previous Indian record of INR 2.36 ($0.032) per kilowatt-hour, submitted by Spanish developer Solarpack in an auction held earlier in the year. In addition, developers set a new record for solar-wind hybrid projects, quoting a price of INR 2.41 ($0.0326) per kilowatt-hour. 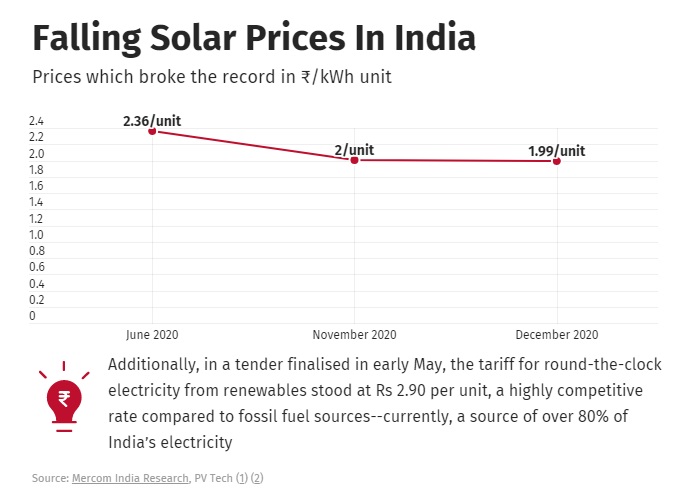 “Solar is now by far the lowest-cost source of new energy in India,” said Tim Buckley, director of energy finance studies for Australia and South Asia for IEEFA. Solar is helping to meet the country’s objective of making power affordable to low-income residents, he said. But that is far from the only benefit.

“And…it doesn’t emit carbon dioxide or methane,” he added. “So there’s an ancillary benefit that it helps solve the world’s climate crisis.”

The combination of low-cost financing and expected solar module cost declines are among the key factors driving down solar prices in India today. Delivering on this year’s record-low solar bids will be a challenge; it will require developers to deploy the latest technology and accurately estimate costs for every project component.

But while the recent bid prices set a tough standard for the Indian solar industry, IEEFA analysts say that it demonstrates investor confidence in the sector and opportunities for continued cost reductions as the country strives to create a more sustainable and domestic-based energy system.

A boost for domestic solar manufacturing

In a testament to India’s growing demand for low-cost and locally manufactured power, Indian power minister R.K. Singh announced last fall that the country would boost its domestic solar manufacturing base to reduce reliance on solar cells and modules imported from China. He also announced that renewables would replace the generating capacity from 29 coal plants slated to retire in the coming years.

State-owned enterprise Coal India — the largest coal-producing company in the world — announced that it will enter the solar value-chain business and launch a new renewable energy vertical. The company received board approval to establish an integrated solar wafer manufacturing facility in December. There are also reports that other state-owned companies could be required to establish a domestic polysilicon supply chain.

In November, Prime Minister Modi announced that the government will offer new incentives for Indian-made solar modules, which follows an announcement that solar modules have been included in a production-linked incentive scheme to help make domestic players more competitive abroad.

A lifeline for renewable projects and utilities

In addition to the measures above, the Indian government extended commissioning deadlines for wind and solar projects already under development, taking into account that developers couldn’t get their workers and equipment to their construction sites amid the lockdowns.

Another significant step the government took to benefit the clean energy sector was to give power distribution companies (discoms) a roughly $13 billion liquidity injection as part of a stimulus package to shore up the Indian economy. The country’s discoms, which have long suffered from financial woes, fell deeper into debt due to weak power demand caused by the COVID-19 pandemic.

Because discoms purchase the power from renewable energy projects, the financial health of the utility sector is critical to keeping India’s clean energy transition moving forward. Analysts note that utility bailouts also benefit thermal power plants. But according to Sinha, the stimulus funding was critical to ensuring that renewable energy generators continued to get paid on time.

“All of these steps have really been very positive,” said Sinha, who recently published the book Fossil Free focusing on the drivers of India’s clean energy transition and path ahead. “I think they indicate that the Indian government is very serious about supporting the growth of renewable energy and they are willing to do whatever is required to push the agenda forward on that front.”

As the share of renewables on India’s power grid continues to grow, so too does the demand for new technologies to balance better integrate these intermittent resources.

In January 2020, the Solar Energy Corporation of India (SECI) announced the results of its first peak power tender, requiring developers to couple wind and solar with energy storage to meet grid needs at times of peak demand. At 1.2 gigawatts, the auction represented one of the largest renewables-plus-storage tenders in the world. Greenko Group and ReNew Power ultimately won 900 megawatts and 300 megawatts of capacity, respectively.

SECI also held the country’s first tender for “around-the-clock” clean power last year, which requires developers to bundle solar with wind, hydropower or energy storage to provide an 80 percent plant load factor over the course of the year. ReNew Power was the sole winner in the around-the-clock auction, which was criticized for having terms that were both too tough and too lenient in turn.

These auctions mark a new era in India’s energy transition. The government is seeking these new kinds of bids with a view to “making renewable energy more acceptable into the grid and enabling India’s discoms to buy more renewable energy,” said Sinha. But he acknowledged that it’s still early days for the next wave of cleantech products and services in India.

There is only one utility-scale energy storage project deployed in India today: a 10-megawatt-hour pilot project owned by Tata Power Delhi Distributed Limited. ReNew’s peak power and around-the-clock projects will be the next battery installations to come online, and they’re still a year and a half out.

“The government is introducing all of these storage-based tenders [because] they are experimenting to ensure that…the storage ecosystem develops in India,” Sinha said.

The International Energy Agency forecasts that India will eventually become the largest market for utility-scale battery storage worldwide. But right now, the government is grappling with what the ecosystem for energy storage in India should look like, including the mix of standalone battery projects versus renewable energy hybrid systems and requirements for ancillary services.

“Over the last decade, India’s government had the luxury of focusing mostly on adding solar and wind energy capacity as fast as possible. Now it must walk, chew gum and much more,” Varun Sivaram, senior research scholar at the Columbia University Center on Global Energy Policy, wrote in a recent analysis for the Aspen Institute.

“The next phase will require deep structural reforms to create a cleaner, more flexible and more efficient power system,” he continued. “But given the impressive progress to date on deploying renewable energy and the willingness of the government to constantly experiment with new policy approaches, there is reason for optimism about India’s energy future.”