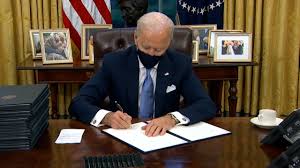 Relief swept across South Korea when Joe Biden was elected US president. His victory was sweeter for being built on a clean-energy-revolution platform. If the United States becomes a solar and wind powerhouse, it will drive down emissions and create jobs.

If Biden prioritises the 2035 net-zero target for America’s utilities and helps offshore wind power take off, it will be a global game-changer for renewable energy, making the US very fertile ground for more investment and jobs.
As a lawmaker in South Korea’s ruling Democratic Party, I congratulate Biden, Vice-President Kamala Harris and their party on winning, in part, by prioritising climate action. South Korea and America have strong historic bonds, and our bilateral relations could help us create green jobs. This collaboration should be top of the agenda, including when President Biden meets South Korean President Moon Jae-in to address the equally threatening nuclear arms issue.

President Moon has committed to replacing coal with renewable energy. In the coming decade, solar and wind power will change the world. It will eclipse the mobile phone and internet revolutions, and help provide the greatest concrete solutions to stopping fossil-fuel-driven climate change from destroying our planet.

Like South Korea, the US has incredible potential in offshore wind energy. Its coasts could generate more than 2,000 gigawatts of electricity, almost double the national consumption. With control of the Senate, President Biden can make offshore wind a priority and create many more jobs while tapping an endless and clean energy.
Europe’s giant utilities seem to be piling in, in anticipation of new deals. Clear political signals matter, so we are watching the US Democratic Party with great interest.

As coal industries in other large economies begin to collapse, and solar and wind energy in particular fill the gap, I am proposing energy revolution policies as an inevitable choice for South Korea’s government, to play a catalytic role in green finance.

Our new projects would transform our economy, so I have proposed a special law to finance this. A unique feature is that South Koreans would be able to invest directly, with the government and affiliated financial institutions covering the associated risks.

Research shows solar and wind infrastructure projects have low risks and high rewards, so why not benefit the public directly? Climate action will only become more popular if Koreans can make money from it, while cutting pollution and electricity bills, and ending our reliance on imports of costly coal and liquefied natural gas.
I believe I received record support, over 84 per cent of the vote, in the 2020 general election because I promote new climate and energy action.

When K-pop group Blackpink called for climate action recently, the internet exploded with support. Our young people understand what is at stake: their survival.

East Asia recently experienced a flurry of net-zero targets. China, which vowed in September to be carbon neutral by 2060, is by far the largest developer of solar and wind power, and is very able to switch from coal.

Japan, which has a 2050 plan but lacks details, has a poor track record on building renewables at home, although reform minister Taro Kono seems to be pushing for solar and wind investment. South Korea has also pledged to be carbon neutral by 2050.

Some say financial institutions only have to be led to transition towards green financing, which, if profitable, would naturally raise funds. But green financing in South Korea is still in the initial stage. We need to look outwards and draw lessons. The world is changing. South Korea has to make quick choices to benefit its population and the planet, as does the US. If we cooperate, both countries can gain.