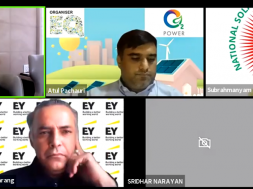 EQ hosted a webinar on ‘Implementation of Market Based Economic Dispatch (MBED)’ on June 25, 2021. The speaker shared their insights on the topic and discussed its benefits, challenges and concerns for the solar industry.

Introducing the topic, Prateek Agarwal said, “It will help us to reduce the cost of the power in terms of the DISCOMs, and to monitor the distribution of the power and development in a well-mannered way.

Dr AK Jain enlightened on the topic. He shared a brief on what has been done, what should be done in future and what is the scope of improvement.

“We have come a long way in solar industry. Now, the time has come that we do not have any other option, except renewable. When electric mobility is in full swing now, renewable energy with storage has to be there.

We also have AatmaNirbhar and PLI scheme in our manufacturing space. The challenge which may not be directly relevant but at times it may begin, that is the capital cost is to play a major role while deciding on everything.

We need a lot of global cooperation, global transitions and learning. Now, even the leaders are also thinking in a different way.

Ultimately, any sector and any technology need to be aligned with the business opportunities, market challenges and government organizations which in our case is DISCOMs.”

He further added, “Renewable energy has become much cheaper than thermal. It will help many things like it would definitely reduce the cost of procurement which at the time used to go very high. Renewable has to be taken on priority.

There would be an unfavourable impact on the existing power plants like thermal and atomic power plants.”

Dr AK Jain said, “Why don’t we have a nationwide minimum charge or something like that? When we talk of northeastern states or islands, there is a totally different economy. If we can think of something like the marginal cost of power nationwide, that’s an idea that I have in mind. There should be uniform tariffs across India.”

“I am a strong believer that now the MBED has to take place and this has to respond. Our payment mechanism has to be smart enough. We have to move forward with must-run without any compromise.”

Sandeep Narang enlightened regarding the rationales of MBED and what should the probable optimization in the transition from Security Constrained Economic Dispatch, SCED to MBED.

Sharing a brief background, he said, “This is about scheduling and dispatch decisions of power plants. Right now, the current regime in the country is that every state is entitled to schedule its own resources.

Each state has its own resources, capacities and PPAs. DISCOMs there have the right to dispatch the way they want to cater to their local demand. When you have multiple states and their own resources, you are not actually doing a national level optimization.

More than 20 years back, the system was designed because we did not have interstate transmission capacity. But now, we have one grid, one frequency.

So, we have a lot of fungibilities to replace resources from one state to another using the transmission system. No, there is a scope of optimization. This is the broad concept in simple terms.”

What it is essentially doing is that all the PPAs that utilities have, all the generators essentially will come on a common platform and they will be dispatched across an aggregate demand. In a sense, this is likely to give massive savings to the dispatch.

MBED has two aspects- Economic Dispatch which is a national level optimization by aggregating demand and aggregating supply. Market-Based because the market will decide at what price it has to be dispatched. These are the components that I think are quite promising.

Conceptually, it is being tested in multiple geographies and India realizes that there is a potential to save. Therefore, this is a step in the right direction.” He further discussed SCED and MBED.

“Savings by the current MBD is a test of time. As per our findings, roughly, about five states, we have estimated close to Rs 2500 crore savings. But, at a PAN India level, it would be much more. We believe at a national level, it could be at least Rs 10000 crore savings.” He also discussed the impact of the MBED.

Atul Pachauri spoke on the benefits estimated of the proposed mechanism. “There are many benefits. As soon as the competitiveness in the market increases, the consumers will be benefited in a longer run.” He said, “The cost of electricity will get cheaper.”

“There are more benefits like the reliability of the system, integration of renewable energy, carbon credits will be generated more, CO2 will be emitted in lesser amount to get a cleaner environment.

“Once, we have these kinds of phenomena in place, the system will get more reliable and sustainable. In a long run, both consumer and producer will be benefitted and it will lead to a greener economy.”

Subrahmabyam Pulipaka shared his insights on MBED, “Today, There are three main concerns of our solar industry. MBED looks to address all three of them in one shot.” Some concerns are the accountability of policy and its implementation, resource availability and payments.

“MBED, according to me, is a blessing in disguise for DISCOMs to go close to their Renewable Purchase Obligations, RPOs, and ensure that they are getting most of their procurement from renewable sources.”

Kaustubh Kulkarni shared his views on the MBED and climate change. He said, “As far as the climate change and other policies are concerned, the Government of India is committed towards it.” He spoke on how we can help renewable energy to sustain better and to be more economical for consumption.

Depak Kumar Thakur talked about scheduling and dispatches. He said, “There may be certain changes required in terms of the priority. In my understanding, the MBED’s primary focus is on the conventional energy rather than the RE sector.

It is very important the must-run status is recognised across the industry without discrimination between NTPC PPAs, SECI PPAs or other PPAs.”

Mudit Jain shared his views on whether MBED will give a better proposition for the DISCOMs and how it will impact the further scenario. “MBED approach is not really an exercise that reforms will happen on day 1. Of course it will reduce the cost for the DISCOMs. Today, they do not have the system to prioritize which particular power needs to go in first.

They end up buying the expensive power and not the cheaper one. But, working capital needs will become very difficult for the distribution companies to meet from day 1 for that they will need immediate support from either the state government some basis as grant money from the central government to really be able to put that Letter of Credit or advanced payment.

For DISCOMs to really become a profitable or sustainable entity, tariff reforms are required. The Electricity Act or the National Tariff Policies have always put forward the views that DISCOMs need to be able to recover their costs and tariff needs to reflect the cost structure. Tariff rationalization needs to happen.

DISCOMs need reforms both at the cost front as well as the revenue front. MBED is a good approach to do the reforms on the cost front. This is an important reform for the distribution companies and generators that will only address their bottom line at best and that too when the top line is taken care of.” The webinar concluded with an interactive question and answer session. 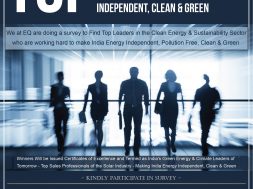 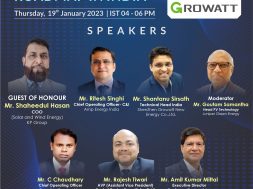 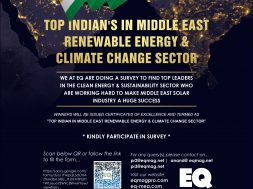