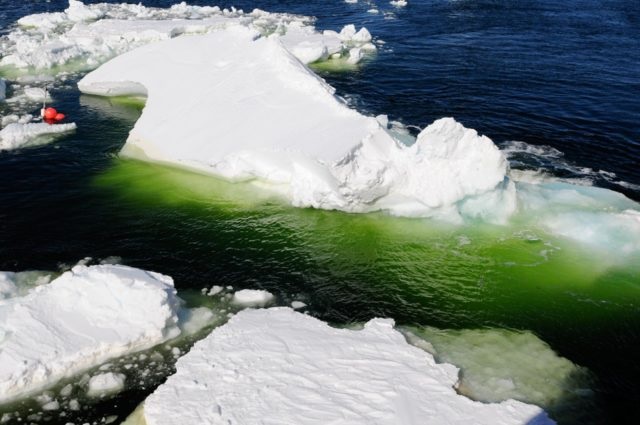 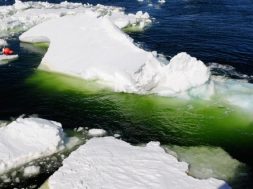 Is it a sign that we are approaching towards the end of this world?

The white snow in Antarctica is slowly turning green as temperatures are soaring due to global climate change. It is providing a comfortable environment for algae/algal blooming. Details of algae bloom that is turning Antarctica green

The green snow algae are microscopic organisms when measured as individuals but when these organisms grow simultaneously, they turn the snow spooky green and can even be spotted from space, researchers said in a study published in the Nature Communications Journal on Wednesday, May 20.

Earlier this green snow was only noticeable in the Antarctic coastline. The temperature there is a little above zero degrees celsius between the hot months of November to February.

High temperatures were recorded in February and a nine-day heatwave burnt the continent’s northern tip earlier this year.

Biologists from the University of Cambridge and the British Antarctic Survey created the first large-scale map of algal blooms and their movements by gathering satellite data of over two summers in Antarctica between 2017 and 2019. The researchers further highlighted that the Antarctic Peninsula experienced widespread heating in the latter part of the last century due to rapid industrialization and the increased use of automobiles.

Researchers believe the growth of organisms will expand as global temperatures increase. The scientists classified 1,679 separate blooms of green algae on the snow surface, covering an area of 1.9 kilometre square which equates to a carbon sink of around 479 tons per year. This points to the possibility of the beginning of a new ecosystem.

A carbon sink is any natural reservoir that absorbs more carbon than it releases, and thereby lowers the concentration of carbon dioxide in the atmosphere.

Algal blooms have formed close bonds with tiny fungal spores and bacteria. The spread of these organisms is linked to bird populations whose excrement acts as a fertilizer to boost their growth. “As penguin populations are affected by warming temperatures, the snow algae could lose sources of nutrients to grow”, the researchers said. “It’s a community. This could potentially form new habitats. In someplace, it would be the beginning of a new ecosystem,” said Matt Davey of Cambridge University, one of the scientists who led the study.

In the future, they will also measure red and orange algae and calculate how the presence of such colorful forms might be affecting the heat-reflecting albedo quality of the snow. “I think we will get more large blooms in the future. Before we know whether this has a significant impact on carbon budgets or bio albedo, we need to run the numbers,” said Andrew Gray, the lead author of the paper.

It is high time that we rectify our destructive means and look after our ailing planet. “We have not inherited this earth from our forefathers; we have borrowed it from our children,” is a revolutionary statement made by Mr. Lester Brown, an environmental analyst based in America and the founder of Worldwatch Institute. It sensitizes us to preserve our natural environment if we do not wish to leave a scorched planet of advancing deserts and impoverished landscapes for our future generations and also brought the concept of sustainability to the core of environmental studies.