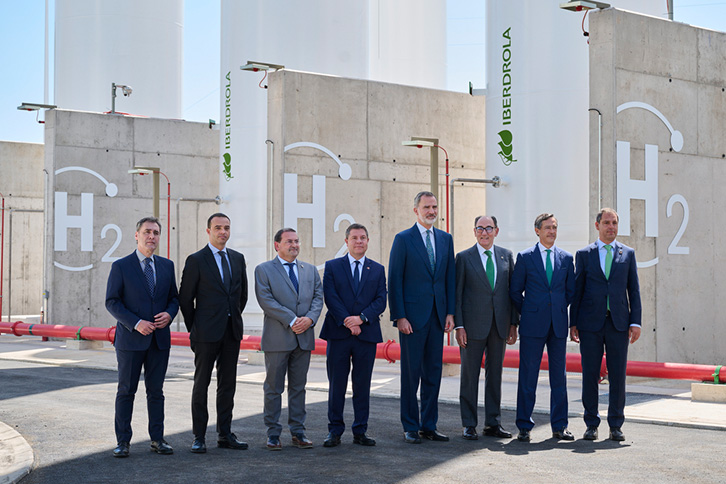 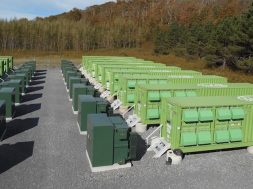 His Majesty King Felipe VI, accompanied by the President of the Regional Government of Castilla-La Mancha, Emiliano García-Page, and the Chairman of Iberdrola, Ignacio Galán, today inaugurated the company’s green hydrogen plant in Puertollano (Ciudad Real). It is the largest facility of its kind for industrial use in Europe, and is also the largest plant currently operating in the world.

The event was also attended by the Government Delegate in Castilla-La Mancha, Francisco Tierraseca; the Mayor of Puertollano, Adolfo Muñiz; the Secretary of State for Territorial Policy and Public Function, Alfredo González; the President of Fertiberia, Javier Goñi; the Regional Minister of Economy, Business and Employment of Castilla-La Mancha; and the Regional Minister of Sustainable Development of Castilla-La Mancha, José Luis Escudero.During his speech, Ignacio Galán explained that the plant presented today represents the start of a major plan of more than 2,000 million euros to replace imported gas with green hydrogen in the production of ammonia for fertilisers.The Chairman of Iberdrola highlighted the company’s investments in “all technologies that contribute to decarbonising the economy and increasing energy independence” with projects such as this one, “the result of Iberdrola’s philosophy of supporting the reindustrialisation of the country”.

Ignacio Galán also expressed his confidence in the full commitment of the public administrations “so that we can continue to make Spain a leading country in sectors of the future, such as renewable energies and, now also, green hydrogen and its industrial derivatives”. This facility could make Spain a benchmark in the production and development of this new energy vector, which would make a decisive contribution to the decarbonisation of sectors that are difficult to electrify, such as fertilisers, high-temperature industry and heavy transport. With a total investment of 150 million euros, which includes both the green hydrogen facilities and a dedicated photovoltaic power plant, the Puertollano plant will be able to produce up to 3,000 tonnes of green hydrogen per year and avoid the emission of 78,000 tonnes of CO2 per year.

The Puertollano plant will be able to generate 100% green hydrogen through one of the world’s largest electrolysis systems. The project will have zero CO emissions2 thanks to the use of renewable energy from an innovative 100 MW solar photovoltaic plant integrated into the facility. This plant – the company’s first of its kind in Spain – has bifacial panels and a lithium-ion battery system with a storage capacity of 20 MWh. Its bifacial modules allow for higher production, as they have two light-sensitive surfaces. It will thus have an annual output of around 156,000 MWh. Tractor effect and job creationThe construction of this project has boosted the development of the region’s economy, involving some 80 local companies and creating more than 1,000 jobs, most of them local.The city of Puertollano could also benefit from a new project being promoted by Iberdrola to use the waste heat produced at the hydrogen plant in the future, as a result of the electrolysis process, to create a 100% green heat network in the municipality.

This initiative – a pioneering one for the company – will make it possible to reduce the consumption of fossil fuels for heating in the town. The green hydrogen produced at the Iberdrola plant can be used in the Fertiberia Group’s ammonia factory in Puertollano, which, thanks to this technology, will be able to reduce the plant’s natural gas needs and will become the first European company in its sector to develop a large-scale experience in green ammonia generation. The start-up of the Puertollano plant represents the first phase of the plan that envisages the development by Iberdrola of 40,000 tonnes per year of green hydrogen for Fertiberia’s consumption between now and 2027, with a potential investment of 1,800 million euros. This initiative would represent 20% of the national target for 2030 and would ensure that around 25% of the hydrogen currently consumed in Spain does not generate CO emissions2 .

This project has been submitted to the Spanish Hydrogen IPCEI, which is subject to analysis by the European Commission. Its materialisation depends on obtaining the expected public support.Iberdrola: at the forefront of a new green revolutionJust as it did with clean energy 20 years ago, Iberdrola is at the forefront of a new renewable revolution, supporting industry to reduce its polluting emissions thanks to this new technology. The group has a project portfolio that could involve investments of 9 billion euros by 2030, with the aim of producing 400,000 tonnes of green hydrogen per year. At present, it has already initiated more than 60 projects around the world.

Among them, the green hydrogen plant recently started up in Barcelona’s Zona Franca, which will supply this clean energy to Barcelona’s metropolitan buses and will promote the creation of a green hydrogen hub in one of the country’s main industrial areas.The company has submitted more than 50 renewable hydrogen proposals to the Next Generation EU programme, which would mobilise an investment of more than 2.4 billion euros for the installation of power capable of generating more than 100,000 tonnes per year in Spain.The Iberdrola group is promoting numerous green hydrogen projects in other countries, including the two largest in the UK.

The first, in partnership with Storegga, will come into operation from 2024 in Cromarty, in the north of Scotland, with a capacity in its initial phase of up to 4,000 tonnes/year, with the possibility of expanding in the future to 20,000 tonnes. The project will enable the decarbonisation of distillery heating processes.The second will be located at the Whitelee wind farm on the outskirts of Glasgow. This facility, which will be able to produce 3,000 tonnes of green hydrogen per year, will come on stream in 2023 and will be capable of supplying enough emission-free hydrogen to power up to 550 buses a day to and from Glasgow and Edinburgh.