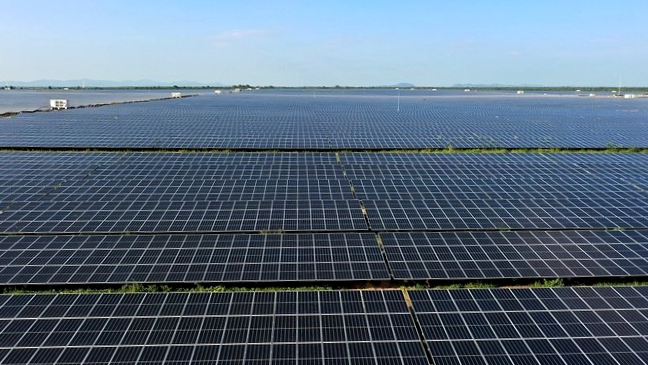 LONGi, the world leading solar technology headquartered in Xi’an, China, is happy to announce that it has successfully supplied its Hi-MO 4 Series modules for Southeast Asia’s largest solar plant, Phase I of the Xuan Thien Ea Sup Project in Dak Lak, Vietnam. Commissioned by Xuan Thien Group on November 15, 2020, the 600 MWac / 831 MWp utility-scale solar plant is estimated to have an electricity output of 1.5 billion kWh per year.

With nearly 2 million solar panels, 500 kV / 1,200 MVA transformer station and 22.2 km of 500 kV line, this is so far the largest solar power plant in Southeast Asia. The plant, which has been set up at an estimated cost of 20,000 billion dong, has been commissioned five months earlier than the scheduled date of completion due to joint efforts by the developers, logistics partners and equipment suppliers including LONGi. Construction of this plant started in April 2020 and LONGi signed an agreement to supply 273 MW of its modules to be used for the project in May 2020. LONGi completed the delivery much before the deadline.

Numerous projects to build large solar power facilities are underway in Vietnam, as the country works towards bridging its anticipated power shortage with green energy. Dak Lak province, located in Vietnam’s Central Highlands, is blessed with ample sunshine and abundant idle land — is highly suitable for solar power generation. Xuan Thien Group, therefore, plans to scale up the capacity of this plant to 2,000 MWac / 2,800 MWp by early 2022, providing about 5 billion kWh per year for the national electricity system.

Dennis She, SVP of LONGi Solar, commented, “We are proud as well as excited to be a part of this grand project by the Xuan Thien Group, offering our trusted mono-crystalline innovations. LONGi believes that technology innovations will further drive solar power cost optimization, enabling us to drive a dramatic shift in the regional energy landscape through more such partnerships.”

This landmark project indicates LONGi’s shared ambition towards the sustainability of the booming Southeast Asian market. As one of the world’s Tier 1 solar manufacturers, LONGi has joined all three of Climate Group’s RE initiatives: RE100, EV100 and EP100, as part of its green corporate responsibility in global climate action. Moving forward, LONGi seeks to promote the global energy transition with global partners and customers, by providing its high-efficiency mono-crystalline solar modules around the whole world.

LONGi, headquartered in Xi’an, China, focuses on manufacturing PV products and providing solar power technology solutions. Its product offerings range from wafers, cells, modules and PV solar power equipment to solar power systems. The LONGi Group has evolved into a global company with assets of approximately US$8.38 billion and more than US$4.65 billion in annual revenues in 2019.