The next time the floodlights are up for a day-night match at the Brabourne stadium, it will be solar power panels on the roof that will be powering them.

New Delhi: The next time the floodlights are up for a day-night match at the Brabourne stadium, it will be solar power panels on the roof that will be powering them. 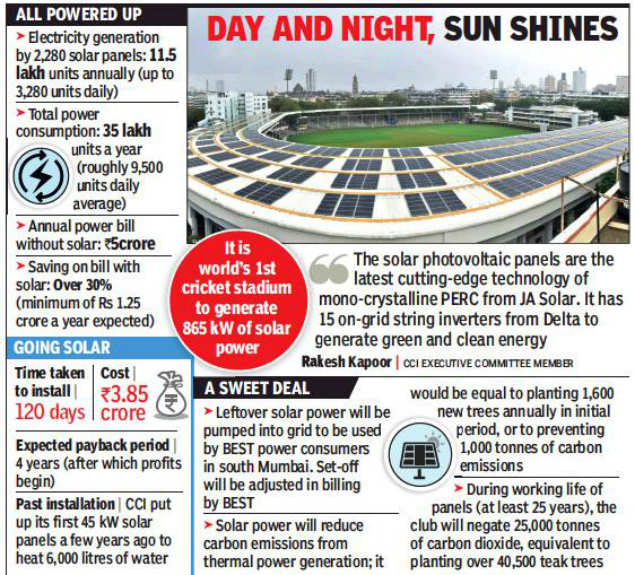 On Monday the stadium, which has several sports activities inside the Cricket Club of India (CCI) complex and is mostly used for first-class cricket matches, earned the distinction of becoming the first cricket stadium in the world to generate 865 kW, which translates to 11.5 lakh units per year, of solar power. It amounts to 30% of the overall power consumption of approximately 35 lakh units per year.

Praising CCI for the big step taken to address climate change, CM Devendra Fadnavis threw open the facility and said it was good as a solar power plant atop the stadium with 2280 solar panels spread over the entire circular roof around the public stands. Fadnavis said a plant over a stadium that can can save power bills worth Rs 1.25 crore is praiseworthy.

“No other cricket stadium in the world has such a huge solar facility atop that can generate 865 kW,” said Premal Udani, CCI’s acting president. The Chinnaswamy stadium in Bengaluru had around 430 kW power from solar panels.

On certain days in summer when power generation will be at its peak and will not be consumed entirely, the leftover power will be pumped into the grid.

The generation of solar power will reduce carbon emissions from the thermal power generation that can be equated with planting 1,600 new trees every year in the initial period. The CCI club and the stadium consumes power worth Rs 5 crore every year. “We will save about 30% of our billing requirement from this facility,” said Rakesh Kapoor, CCI executive committee member who is also the vice-chairman of CCI’s infra committee.

Fadnavis said setting up such a large power plant in 120 days was a record in itself. Though floodlights will require generators, normal power and other back-ups going by the intensity of power needed by them, indirectly more than the same amount of green power would have already been supplied to the grid. In effect, it will be green power that will be fed to the stadium and other club areas.

While Tata power executed the project, the Excelsior Engineering Solutions acted as the project consultant. The solar panels were imported from China.