“For the first time renewable energy demand in Europe surpasses 500 TWh – or half a billion Guarantees of Origin (GOs),” says Tom Lindberg, Managing Director in ECOHZ, commenting on 2018 statistics from the Association of Issuing Bodies (AIB).”If the growth trend from the last five years continues, the GO-market will soon surpass one billion Euro,” Tom Lindberg adds, noting “that customers are willing to pay a premium on certain origins of energy.”

The European Union has previously mandated that you shall buy Guarantees of Origin to document and report renewable energy consumption in Europe.

The current reported volume is 499 TWh, but this is expected to increase by an additional 10 TWh, when unreported German Q4 figures are included. This will push the expected total demand for renewable electricity documented with Guarantees of Origin close to 510 TWh. This represents an impressive 8% increase from 470 TWh in 2017. 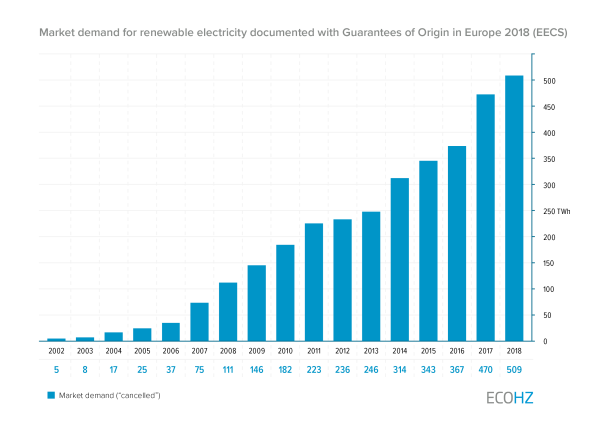 Demand for renewable electricity in France grows by 50%

Although the final numbers have not been published for Germany yet, they are in line to exceed 100 TWh for the first time.

Wholesale prices for GOs averaged around 1.30 €/MWh in 2018, while Nordic hydro GOs traded as high as 2.29 €/MWh. This indicates that the market is willing to pay higher prices even though demand did not grow quite as aggressively as in 2017.

With demand for renewable power now exceeding 500 TWh, and forward prices set at around 1.30 €/MWh, the annual value of the market exceeds 650 MEUR. If growth trends continue we can safely predict that this will be a billion Euro market in a few years.

Wind power continues to strengthen its position among buyers

Although hydropower is still the greatest source of renewable electricity, preferences are gradually shifting towards alternative renewable sources, with wind power being “the technology of choice”. As 2018 figures are updated and reported later in 2019, these shifts will likely become more pronounced. These changes in demand may not only reflect changes in customer preferences, but also reflect changes in market availability for different technologies. 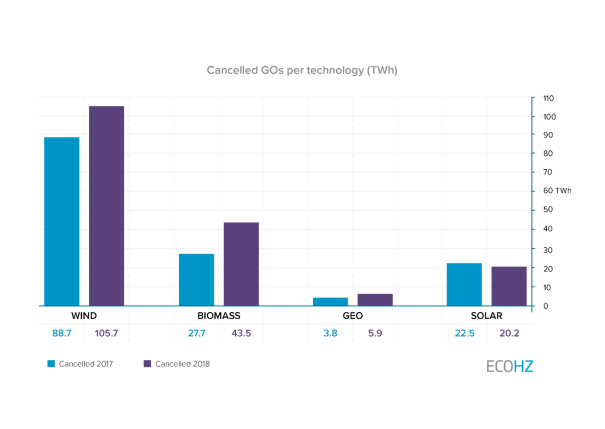 The forces behind the demand

The RE100 initiative now has 161 corporate members that have all publicly pledged to consume 100% renewable energy. Global reporting initiatives like CDP and Greenhouse Gas Protocol are enabling this movement. Also, the EU recently approved a new Renewable Energy Directive (REDII), strengthening the GO system by further embedding it in European legislation.

tags: New milestone: Demand for renewable electricity surpasses 500 TWh in Europe
23
previous Total Eren and NBT Secure the Financing for the First Phase of The 250 MW Syvash Wind Project in Ukraine from a Consortium Led by EBRD
next Climate fight: Germany sets 2038 deadline to end coal use