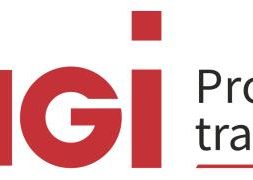 The China Electric Institute (hereinafter referred to as CEI) has compared the outdoor power generation performance of the then emerging mono-crystalline PERC and polycrystalline modules in 2016-2017. The 1-year monitoring data of two real-life fields in Sanya, Hainan (humid and hot marine environment) and Turpan,

Bifacial PERC modules were first launched in China in 2017 and were widely used in 2018. In order to further verify the power generation performance of monofacial and bifacial PERC modules in harsh environments, in 2018 the CEI mounted monocrystalline PERC modules, polycrystalline modules and polycrystalline PERC bifacial modules in their Hainan and Turpan test fields and conducted energy yield tests over a year. Pictures of the pilot projects and comparison data are as follows:

The monofacial and bifacial PERC modules for the pilot project were provided by LONGi, and the polycrystalline modules were from two Tier 1 manufacturers. The power of the modules was retested by the CEI before 2mounting samples, with power generation data measured from the DC side and the results used to calculate the power generation per watt. 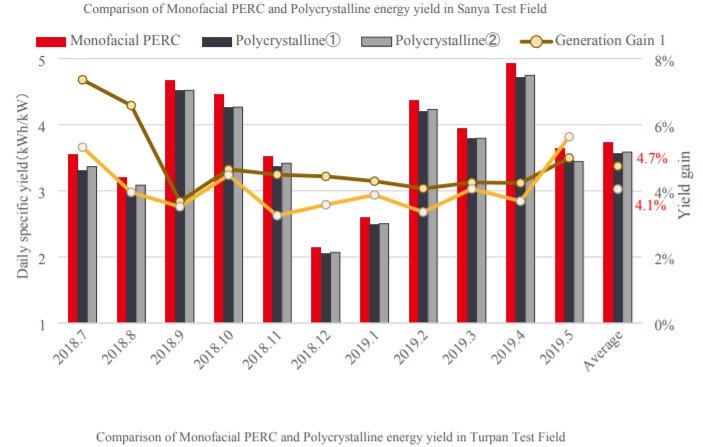 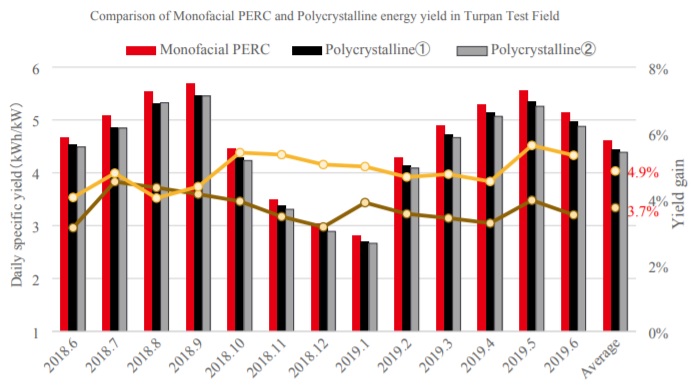 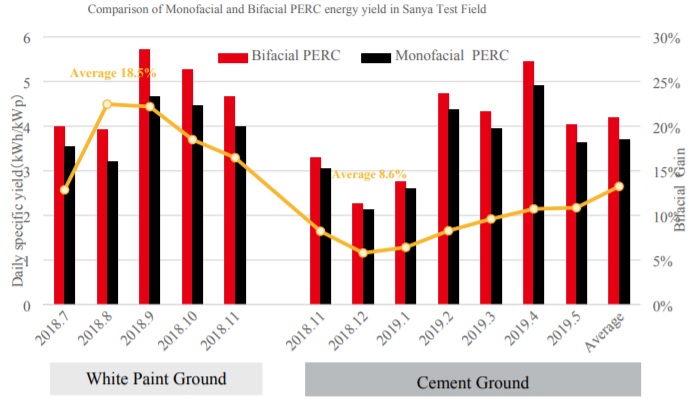 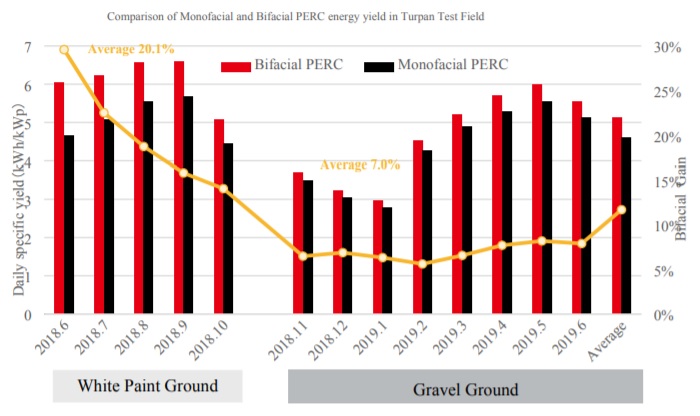 The yield gain of the bifacial modules was shown to be higher in summer than in winter throughout the year; for a sunny day, the power generation gain is represented by a U-shaped curve that is higher in the morning and evening than at noon. The figure below shows the power generation of monofacial and bifacial PERC modules in the Sanya test field on April 29, 2019: 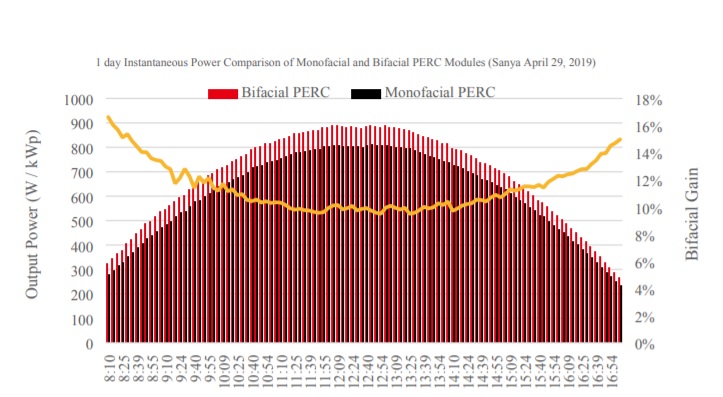 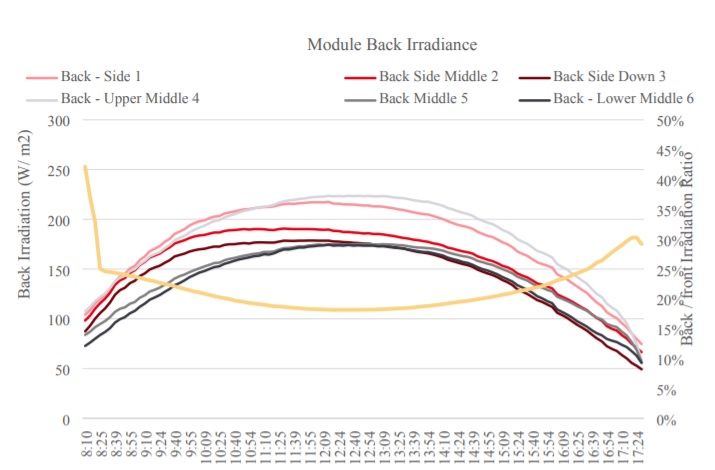 In terms of the test results in Turpan, we focused on the working current of the module under high irradiation conditions, calculating the total inclined irradiation and string current for each month. The results in July 2018 and June 2019 are shown in the figure below. Turpan is an area with abundant light resources. The maximum daily irradiation is usually about 1,000W / m2, and there are few days with poor irradiation. 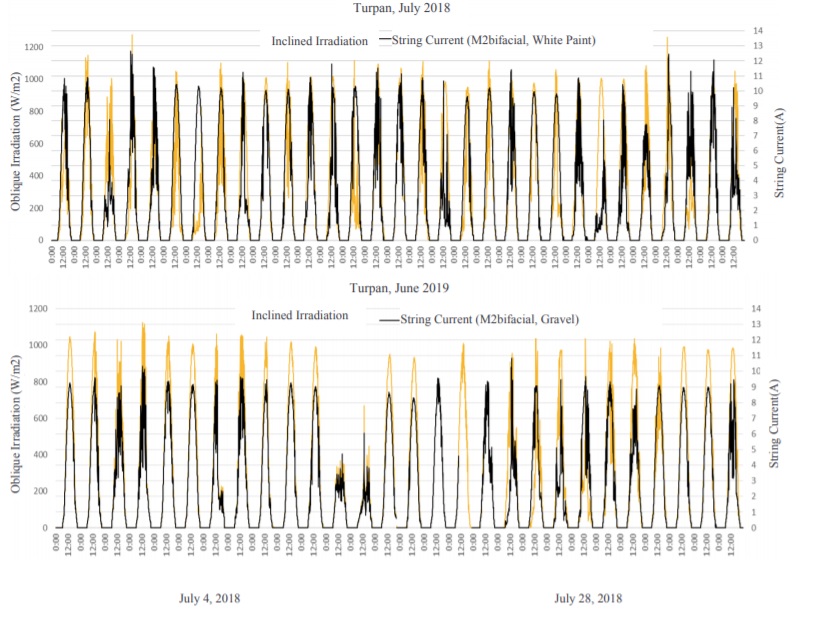 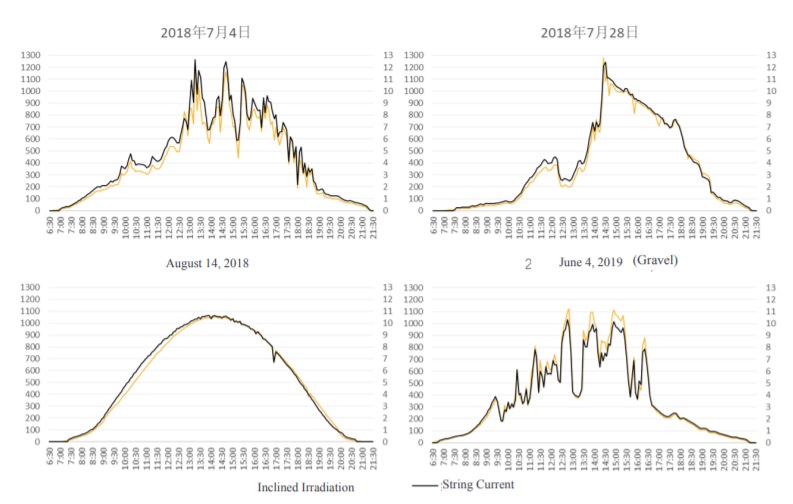 Conclusion: in the one-year real-life field test conducted by CEI in Sanya, Hainan (humid and hot marine environment) and Turpan, Xinjiang (dry and hot environment), the LONGi monofacial PERC module maintained its power generation advantage over the polycrystalline module, with a power generation gain of 4- 5%; the newly added LONGi bifacial PERC module demonstrated a stable and reliable power generation gain compared with the monofacial module. The yield gain with white paint is about 20% and that with cement and gravel is about 8%. The case study analyzes the irradiance at different positions on the rear side, the annual irradiance and the working current, which can provide valuable reference for the application of bifacial modules in power station systems.

0
0   0
previous CCI approves acquisition of Teesta Urja Limited by Greenko Mauritius
next 158.75mm, 166mm, 210mm, which is more favored by the market?