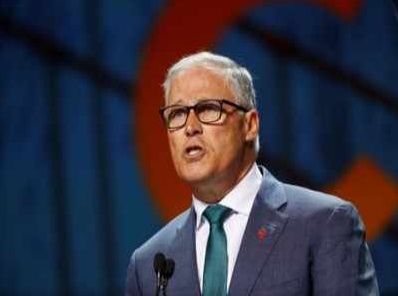 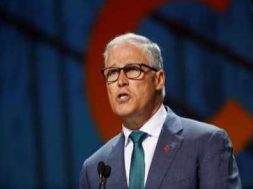 WASHINGTON: Democratic presidential hopeful Jay Inslee released a sweeping plan on Wednesday to reclaim US leadership in the fight against climate change that includes proposals to resettle hundreds of thousands of climate refugees, and raise barriers to fossil fuel imports.

Democratic contenders vying for the party’s nomination to take on Republican President Donald Trump in the 2020 election are seeking to distinguish themselves with the strongest proposals to halt global warming, a top issue in the Democratic race.

Inslee, who is seeking to break out of the bottom of the crowded Democratic pack, has made climate change the central issue in his campaign.

The Washington state governor has already set a plan to bring the United States to net-zero carbon emissions by 2045 by eliminating oil, gas and coal use and replacing it with renewable sources through massive investment in clean energy technology and infrastructure.

Any of those plans would mark a reversal of Trump’s energy agenda, which is centered on eliminating or weakening climate and other environmental protections to boost oil and gas drilling and coal mining.

Inslee said in a statement rolling out the plan on Wednesday that he believed fighting global warming must also include a detailed scheme to engage on the issue internationally, and laid out a five-pronged plan to do so.

It ranges from rejoining the Paris Climate Agreement, an international accord to fight climate change that Trump opposes, to more ambitious ideas like overhauling U.S. trade and immigration policies to prioritize climate change, and blocking U.S. financing for foreign fossil fuel projects.

On immigration, Inslee’s plan “will adapt America’s immigration policy to the reality of climate migration,” which it said amounted to “a global crisis of displacement at a scale not seen since World War II.”

“Climate change is contributing to an expanding refugee crisis both directly, with 24 million people displaced on average each year around the world since 2008 due to extreme weather events, and indirectly, as climate change impacts force people to migrate in search of food, water, shelter, or to avoid conflict,” the plan stated.

His plan called for raising the ceiling for annual refugee admissions to the United States to meet and eventually exceed the 110,000 set in the final year of President Barack Obama’s administration, to allow for a “historic number of refugees.”

On trade, Inslee’s plan calls for “increasing trade barriers on fossil fuels and products causing or resulting from deforestation practices” among other things.

“U.S. trade policies, trade agreements, and trade relationships should all be evaluated to ensure they are consistent with the swift and just transition to a global carbon-free future,” the plan said.