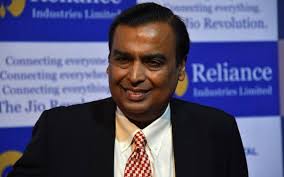 Reliance Industries, RIL conducted its 44th Annual General Meeting today. “As one of the biggest energy markets in the world, India will play a leading role in transforming the global energy landscape, said Mukesh Ambani”.

“We have started work on developing the Dhirubhai Ambani Green Energy Giga Complex on 5,000 acres in Jamnagar. It will be amongst the largest such integrated renewable energy manufacturing facility in the world,” said Mukesh Ambani.

Reliance Industries has announced to invest Rs 60,000 crore in the New Energy Business. RIL will set up a renewable energy complex. Reliance has announced four Giga factories for the next green plan. The list of the factories is provided here:

“We will start with raw silica and convert this to poly silicon which we will then convert to ingot and wafers. The wafers would be used to make high-efficiency solar cells and finally assembled into solar modules of the highest quality and durability.

RIL will target to achieve costs that are the lowest in the world to ensure the affordability of our solar modules. We are highly inspired by the goal set by our Prime Minister Shri Narendra Modi Ji for India to achieve 450GW of renewable energy capacity by 2030,” said Mukesh Ambani.

Ambani said that there is no option for businesses other than going green. He said, “Every unit of Reliance Industries would have to pivot as conglomerate moves towards net-zero.” Speaking at the Qatar Economic Forum, he said, “We have no option as a society and as a business but to really adopt a sustainable business model”.

In its annual report for FY21, RIL said that the world is now closing ranks for strong global action on climate change. “This gives Reliance Industries the right opportunity to accelerate our own ambitious New Energy and New Materials Business wedded to the vision of clean and green development.”

In its last AGM, RIL said that it would replace transportation auto fuels with clean electricity and hydrogen and set the target to become net carbon-zero by the year 2035.

Monthly Re Generation In India