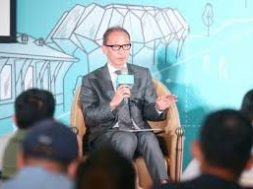 BHUBANESWAR, India (Thomson Reuters Foundation) – In the next five years, India plans to install 10,000 small-scale solar-power grids across the country to bring basic electrical power to communities without it. But providing access to a minimal supply of clean energy – enough to power two LED lights for a few hours and charge a mobile phone – is probably not enough to significantly improve people’s lives, new research suggests.

A study in Uttar Pradesh, which looked at more than a thousand homes that had received basic access to clean electricity for the first time, found that spending on expensive kerosene for lighting had fallen, a benefit to families. But access to a couple hours a day of electricity was not enough to boost savings, help launch new businesses, increase time spent working or studying, or otherwise significantly improve people’s lives, researchers found.

What appears to be needed instead are larger clean power systems capable of providing enough energy to power businesses throughout the day, said Michael Aklin, the study’s lead author and a political science professor at the University of Pittsburgh. “Larger off-grid systems that offer more power could be used for appliances and machinery, with more potential for livelihood creation,” he told the Thomson Reuters Foundation in an email interview.

Such systems could be used to run businesses such as internet cafes, fuel stations, repair shops and banks, as well as schools and health centres, he said. Income-earning businesses of that kind would make it easier to pay back the higher up-front costs of installing clean energy systems – and “could make a major contribution to rural development in India”, Aklin said.

Adarkanta Jena, 53, an engineer with the government of Odisha state, agreed that at least eight hours of uninterrupted power a day are needed to run popular small businesses such as welding shops producing grills for windows, flour mills and machines for hulling or threshing rice. And “in 24 hours, 12 hours is the minimum power supply that will enable children to study extra hours, provide women a lighted space to cook and the family not to eat dinner in the dark. Having electricity from 8 a.m. to 8 p.m., at least, could bring social and economic change,” he predicted.

Frustrations with the power supply are hardly limited to clean power users in India. Even 75 percent of families connected to grid power in rural areas – 700 million people – regularly get less than six hours of uninterrupted power a day, according to a 2016 study by the Delhi-based Centre for Science and Environment. India’s government aims to bring 500-megawatt mini-grid solar systems to about a fifth of the country’s 1.3 billion people in the next five years, according to a government draft policy.

More than 230 million people in India still have no access to basic electricity, often in rural areas where expanding the national power grid is too expensive. Expanding access to power aims to boost household incomes, help students study, provide better access to information via radio or television and generally improve life for rural people, studies have suggested.

But the Uttar Pradesh study – which looked at 1,281 households in 81 communities – found that providing about two hours of electricity in the evening via clean energy mini-grids resulted in few significant changes. Many households continued to use subsidised kerosene for lighting after the mini-grid power shut off, said the study published in Science Advances magazine.

Electrification programs that focus on off-grid technologies must think carefully about whether low-cost minimal systems are the right answer, authors of the study said. Clementine Chambon, co-founder of Oorja Solutions, which will begin setting up clean energy mini-grids systems in the Bahraich district of Uttar Pradesh in June, said she agreed that providing larger amounts of power to supply businesses, rather than just homes, could help solar systems pay for themselves more quickly – and could subsidise household use of power.
“Oorja will cross-subsidise residential consumers through higher electricity tariffs for businesses. This renders clean energy affordable to all, whilst ensuring the profitability of the mini-grid infrastructure,” Chambon said. India eventually aims to expand its grid power system throughout the country, but there will be five to 15 years while that is underway where other solutions – such as mini-grids – are needed, according to Ashvin Dayal, the Rockefeller Foundation’s managing director for Asia.

Those are crucial years both for meeting world goals to extend clean electricity to communities without it and to curb climate-changing emissions in line with the Paris Agreement, which calls for fossil fuels to be phased out by the second half of the century. The cost of producing solar power in India has plunged in recent months, hitting a level that makes it price competitive with fossil fuels, including coal, experts say.

That makes it increasingly feasible to shift to using clean energy mini-grids, which could result in substantial savings on national subsidies for fossil fuel, according to Aditya Ramji, a Delhi-based renewable energy consultant. India has the potential to produce nearly 750,000 megawatts of solar power, according to the Ministry of New and Renewable Energy. Given current patterns of household consumption, one megawatt can power about 1,500 rural households, Ramji said.

A 2016 sustainable energy study by the International Energy Initiative found that an average Indian household that relies on kerosene lamps for lighting spends 3,200 rupees ($50) each year on the fuel and emits more than 380 kg of climate-changing gases in the process. Chambon said the results of the Uttar Pradesh study should not deter investment in solar mini-grids but instead help “improve the delivery and impact of rural electrification programmes”.