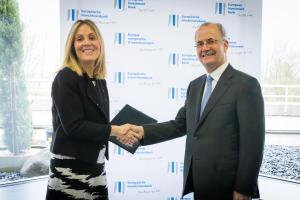 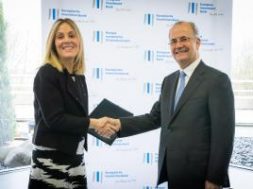 The European Investment Bank (EIB) and the Palestine Investment Fund (PIF) have signed a loan agreement worth USD 18 million to finance the installation of rooftop photovoltaic (PV) systems on 500 public schools in the West Bank. The EIB’s investment, which falls under the Economic Resilience Initiative (ERI) will generate 35 MW of clean energy enough to power more than 16000 houses across the West Bank.

The financing agreement was signed in a ceremony hosted by the European Investment Bank in Luxembourg by Emma Navarro, Vice President of the EIB, Dr. Mohammad Mustafa, Chairman of the Board of Directors of the PIF, and Azem Bishara, CEO of Massader.

Emma Navarro, Vice President of the EIB said: “The agreement will help to harness the energy from the sun to power houses as well as schools. This will improve the availability of electricity supply in the West Bank. As the Bank of the European Union, we seek to promote renewable energy with the purpose of improving living conditions of Palestinian residents and improving infrastructure for business.”

Dr. Mohammad Mustafa, Chairman of the Board of Directors of the PIF added: “PIF -as Palestine’s development-centric sovereign fund- is leading an impact investment program that covers a diverse portfolio in the strategic and vital economic sectors such as renewable and traditional energy, infrastructure, natural resources, industry, technology and agriculture. PIF aims at contributing to laying the foundation for an innovative, sustainable and knowledge based Palestinian economy.

We are proud of this agreement and aspire that this would be the start for a strong and solid cooperation between PIF and EIB. We appreciate highly our partnership with the Palestinian Ministry of Education, the Palestinian Energy and Natural resources Authority and all the relevant Palestinian stakeholders.”

Azem Bishara, CEO of Masader explained that the schools’ rooftops project is an integral part of “Nour Palestine” solar program; which PIF launched aiming at producing 200 MW of clean energy in the coming six years with an estimated investment portfolio of $200M, including three medium sized solar fields in the West Bank that are currently under construction.

The EIB’s financing will be used for the installation of rooftop PV panels with a total capacity of 35 MW on 500 schools dispersed throughout the West Bank and East Jerusalem. Massader, a PIF’s wholly owned subsidiary, will implement the project. The company will use the electricity generated to power schools at no cost, as offset against using the rooftops, and will sell the remaining electricity at a competitive tariff to four electricity distribution companies operating in the West Bank and East Jerusalem..

This project, which falls under the European Union External Lending Mandate to the EIB, contributes to the development of social and economic infrastructure and climate change mitigation. It supports economic resilience of Palestine through a long-term investment in decentralised energy systems and it contributes to a reduced reliance on electricity imports. It will result in relative emissions savings estimated at 31000 tons of CO2 equivalent per annum, based on the avoidance of electricity generation from the existing and new thermal plants.

The ministry of education, which will enjoy electricity for the relevant schools, will raise awareness of children about climate change and the benefits of renewable energy as a source of sustainable energy.

The Economic Resilience Initiative (ERI) consists of an integrated package of loans, concessional finance and innovative instruments designed to enable financing of an additional €15 billion of investments on top of investments already foreseen.

ERI aims to help tackle the migration challenge in Europe’s Southern Neighbourhood (Algeria, Egypt, Jordan, Lebanon, Libya[1], Morocco, Palestine[2], Syria[3] and Tunisia.) and the Western Balkans. Requested by the 28 EU Member States, ERI is a part of the joined-up response by the European Union to the challenges posed by forced displacement and migration. The Initiative is complementary to the EU’s recently agreed External Investment Plan and is being implemented in close cooperation with EU Member States and other partners.

Under the ERI, the EU bank is increasing financing by EUR 6 billion during the 2016-2020 period. This increase is expected to mobilise and support additional investment of EUR 15 billion. This comes on top of the EUR 7.5 billion of financing already foreseen in the two regions. Alongside increased financing, the EIB offer additional concessional finance, enhanced support to the private sector and technical assistance.

As a financial institution of the EU, the European Investment Bank’s (EIB) activity outside the EU is directly contributing to the implementation of the EU’s external policies. It is done under the external lending mandate (ELM), which covers the pre-accession countries, the southern neighbourhood and Mediterranean region, as well as Latin America and Asia. The ELM offers EU comprehensive guarantee for EIB operations in the countries listed in the mandate.

Established in 2003, PIF is the leading impact investor in renewable energy, agribusiness, infrastructure, real estate, technology, and entrepreneurship in Palestine. With over $1 billion in assets currently under management, PIF is uniquely positioned to both originate and co-invest in development projects across a variety of critical sectors

Massader invests in and leads large-scale strategic projects aimed at developing Palestine’s natural resources and infrastructure. Established in 2015, Massader is a fully-owned subsidiary of the Palestine Investment Fund and is currently leading PIF’s investments in natural resources and infrastructure development projects in Palestine such as Gaza Marine natural gas field, West Bank oil field, Jenin power plant and the Noor Palestine Solar Program. In doing so, Massader endeavours to contribute to Palestine’s energy security and independence, facilitate investments large scale projects, create sustainable employment opportunities, and catalyze economic growth, all with the aim of creating a firm foundation to unlock the potential of the Palestinian economy.

[1] The EIB will start operating in Libya once it has signed a Framework Agreement with the country – currently under preparation.

[2] This designation shall not be construed as recognition of a State of Palestine and is without prejudice to the individual positions of the Member States on this issue.

[3] The EIB will start operating in Syria once it has signed a Framework Agreement with the country – currently under preparation. Following EU sanctions in November 2011, the EIB suspended all loan disbursements and technical advisory contracts for projects in Syria.

tags: School rooftops will generate solar energy for 16000 houses in the West Bank
23