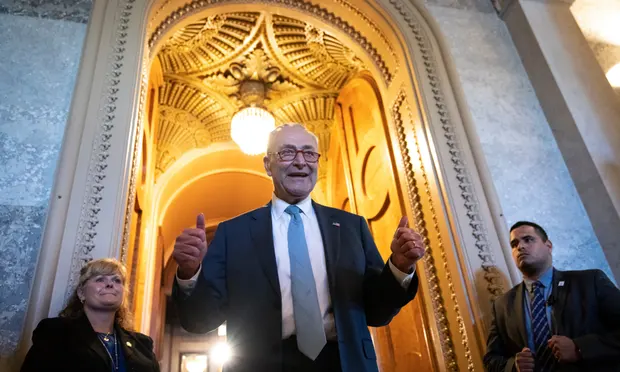 Senate Democrats passed their climate and healthcare spending package on Sunday, sending the legislation to the House and bringing Joe Biden one step closer to a significant legislative victory ahead of crucial midterm elections in November.

If signed into law, the bill, formally known as the Inflation Reduction Act, would allocate $369bn to reducing greenhouse gas emissions and investing in renewable energy sources. Experts have estimated the climate provisions of the bill will reduce America’s planet-heating emissions by about 40% by 2030, compared with 2005 levels.

Democrats have promised the bill will lower healthcare costs for millions of Americans by allowing Medicare to negotiate prescription drug prices and capping Medicare recipients’ out-of-pocket prescription drug prices at $2,000 a year. Those who receive health insurance coverage through the Affordable Care Act marketplace are also expected to see lower premium costs.

The legislation includes a number of tax provisions to cover the costs of these policies, bringing in $739bn for the government and resulting in an overall deficit reduction of roughly $300bn. The policy changes include a new corporate minimum tax, a 1% excise tax on stock buybacks and stricter enforcement by the Internal Revenue Service.

“Today, Senate Democrats sided with American families over special interests, voting to lower the cost of prescription drugs, health insurance and everyday energy costs and reduce the deficit, while making the wealthiest corporations finally pay their fair share,” Biden said in a statement celebrating the bill’s passage. “I ran for president promising to make government work for working families again, and that is what this bill does – period.”

The final Senate vote was 51-50, with every Democrat supporting the bill while all 50 of their Republican colleagues opposed the legislation. With the Senate evenly divided on the bill’s passage, Vice-President Kamala Harris cast the tie-breaking vote.

Because Democrats used the reconciliation process to advance the bill, they needed only a simple majority to pass the proposal, allowing them to avoid a Republican filibuster.

But the choice to use reconciliation also somewhat limited what Democrats could include in their bill. The Senate parliamentarian ruled on Saturday that a key healthcare provision, which would have placed inflation-related caps on companies’ ability to raise prescription drug prices for private insurance plans, ran afoul of reconciliation rules. Another proposal to cap the cost of insulin in the private insurance market at $35 a month was also stripped out of the bill after 43 Senate Republicans voted to block the policy on procedural grounds.

Still, Democrats celebrated that the Senate parliamentarian allowed most of their healthcare and climate provisions to move forward.

“While there was one unfortunate ruling in that the inflation rebate is more limited in scope, the overall program remains intact and we are one step closer to finally taking on big pharma and lowering Rx drug prices for millions of Americans,” the Senate majority leader, Chuck Schumer, said on Saturday.

Democratic leaders previously had to alter the tax provisions of the bill to secure the vote of Kyrsten Sinema of Arizona, who announced her support for the proposal on Thursday.

Sinema caused some last-minute hand-wringing among Democrats on Sunday, as she pushed for changes to the new corporate minimum tax that would exempt some businesses from the policy. Democratic senators ultimately reached an agreement with Sinema to approve the exemption, which was paid for by extending loss limitations for pass-through businesses.

Sinema was considered the last Democratic holdout in the negotiations, after fellow centrist Joe Manchin said he would vote in favor of the bill. The Senate’s approval of the bill came nearly eight months after Manchin abruptly scuttled talks over the Build Back Better Act, which was viewed as Biden’s signature legislative proposal. After tanking that bill, Manchin spent months participating in quiet deliberations with Schumer over another spending package that was more focused on reducing the federal deficit and tackling record-high inflation.

The resulting bill was able to win the support of the entire Senate Democratic caucus on Sunday, even though the legislation is much smaller in scope than the Build Back Better Act.

The bill’s narrower focus frustrated the progressive senator Bernie Sanders, who criticized the compromise in a Saturday floor speech. Sanders complained that the legislation would do little to help working Americans struggling to keep up with rising prices, and he unsuccessfully pushed for expanding the bill to further lower healthcare costs.

“This legislation does not address the reality that we have more income and wealth inequality today than at any time in the last hundred years,” Sanders said. “This bill does nothing to address the systemic dysfunctionality of the American healthcare system.”

Despite that criticism, Sanders backed the final version of the bill. The Senate’s approval followed a marathon session that lasted overnight and into Sunday afternoon, as Republicans forced votes on dozens of proposed changes to the spending package. Democrats remained mostly unified in opposing Republicans’ amendments, keeping the bill unchanged and ensuring the legislation’s passage.

“It’s been a long, tough and winding road. But at last, at last we have arrived,” Schumer said on Sunday. “I know it’s been a long day and a long night, but we’ve gotten it done. Today, after more than a year of hard work, the Senate is making history.”

Republicans fiercely criticized the bill, rejecting Democrats’ arguments that the legislation will help tackle rising prices. According to a report issued by Moody’s Analytics, the bill will “modestly reduce inflation over the 10-year budget horizon”.

House Democrats have dismissed Republicans’ criticism of the bill, insisting they will swiftly pass the legislation and send it to Biden’s desk. The majority leader, Steny Hoyer, has said the House will return on Friday to take up the legislation, and Democrats do not need any Republican votes to pass the bill.

The House speaker, Nancy Pelosi, has promised that the chamber would move quickly as soon as the Senate gave the bill its stamp of approval. She told reporters at a press conference last week, “When they send it to us, we’ll pass it.”